By STEPHEN GUILFOYLE Dec 05, 2019 | 11:39 AM EST
Stocks quotes in this article: NKE, NOW, AMZN, EBAY, FL
By now you know. Goldman Sachs analyst Alexandra Walvis upgraded Nike ( NKE) to a Buy rating from Neutral with a $112 price target. Nike was also added to Goldman's "Conviction List" for the Americas. Walvis really likes Nike.
Check this out, straight from the note: "We believe Nike is a unique asset, where a strong brand combined with a disruptive and innovative strategy are positioning the business for multi-year growth, expansion in margins, and higher returns on invested capital."
Pretty strong words. Walvis expects growth in Chinese markets to land at a pace up in the high-teens (percentage wise). You know who likes multi-year growth, and expanding margins? This guy. Let's dig in.
My only question is who is Alexandra Walvis? No knock against her as an analyst. She does not come highly rated by TipRanks, but then again, this may be more a function of her youth, which by definition would not allow for an expansive track record. There is no doubt about the energy, though. Check this out: Way back on Monday, and with less fanfare, I might add, Kimberly Greenberger (5 stars) of Morgan Stanley re-iterated her Overweight rating, while increasing her target from $108 to $118.
There's more. Greenberger, who has a 70% success rate over all, and notably already has a successful track record concerning Nike specifically, resets her "bull case" price at $138, up from $130. Greenberger, who many of you likely do know, believes that Nike is in the "early innings" (and you know I like baseball) of transforming the business into a digitally-driven, direct-to-consumer model. She also mentions the likelihood of higher growth moving forward on increased profitability.

It's Not Just Talk

About the transition in this business model that both of these analysts representing major investment banks refer to -- it's not just talk. Go back to Oct 22. That day, Nike announced that longtime CEO Mark Parker would step down from that position in January to be replaced by John Donahoe, CEO of business cloud king ServiceNow (NOW) , who had already been a member of the Nike board. Shares of ServiceNow took a pasting on that news, but have since recovered.

Now, let's fast-forward to mid-November. Nike breaks up with Amazon ( AMZN)  as a partner in e-commerce. Why would a seller of apparel and footwear choose to leave Amazon? Perhaps a high level of confidence in its own avenues for direct to consumer sales, after hiring an new CEO who not only ran a high profile cloud-based operation, but eBay ( EBAY) prior to that?
In addition, while the firm has every intention of relying upon more focused use of "big data" to drive the business forward, it apparently has no intention of leaving Foot Locker ( FL) , where brick-and-mortar shoppers can still get a premium shopping experience.
Then, Nike makes an investment in tech start-up HandsFree. The idea behind that? Hands-free technology. The ability to step in and out of shoes. An obvious attempt to stay engaged to markets for both youthful consumers, as well as the athletic-leisure crowd.

There is no doubt that with a change at the top and the direction obviously taken that Nike is at an inflection point, even already at the top of the chart. Two things matter right now. Trade with China, and should that fail, further manipulation of the firm's supply lines may be necessary, but sales are growing in China. That market has remained robust for the firm. In addition, as a premium brand, pricing power is all-important, and that may be one giant reason for leaving Amazon's retail site, the great deflator.

From higher altitudes we can see how the firm broke out of a basing pattern in late September, and then found support at former resistance.

Now zoom in, and take a look at the last three months: 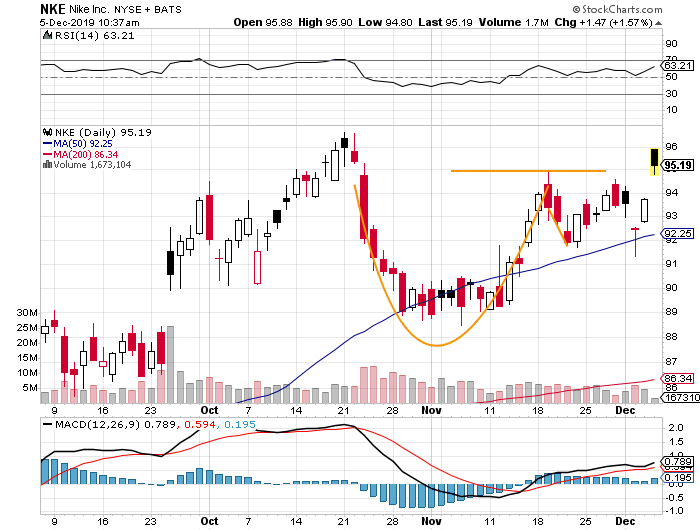 As you will quickly see, these shares battle with a $95 pivot this morning, trying to break out of a well defined cup with handle pattern. You also have rising Relative Strength coupled with a resilient looking daily MACD. Oh, and look at that: the same island-type looking trading session for Tuesday of this week that we discussed in Market Recon this morning. All of these items by themselves are bullish looking.
My own analysis, based on all of this, is that these shares can hit a level up around $114 in 2020. Betsy Ross aside, this is a good stock for a long position. Should I be wrong, or the trade war gets real ugly, the panic point would be an even $90. Nike is set to report quarterly earnings (Q2 FY2020) after the closing bell on Thursday, Dec. 19.