Could it be that Nike (NKE) and Micron (MU) have more in common than we thought? It feels weird writing that statement, but there's a common component from the earnings reports of both companies: China.

The bears' major argument around Micron is the fear of tariffs pulled sales forward. If we examine Nike, we see disappointment in North America, partly because of tariffs, but sales in China skyrocketed. Were those sales pulled forward as well? Did the Chinese consumer fear tariffs would push prices up on Nike products?

The challenge for investors is we won't get an answer on this for at least two more months, if not three to four. And if tariffs become fully enacted, we really won't get a clear answer because the tariffs can be blamed rather than be a pull-forward.

We'll only know for certain if tariffs don't fully occur. Heck, we don't even need a resolution of the Trade War, but we will need to avoid an escalation.

As for Nike itself, sales rose a hardly 10.2% to $10.3 billion in the quarter resulting in bottom-line profits of $0.70 per share. Although North American sales of 5.3% came up short of 5.6% expectations and gross margins were a concern, the company exceeded estimates by $0.13 per share. China was the star with 20% growth in the region while digital growth of 38% and the Jordan brand topping $1 billion in sales for the first time also gave the results a strong boost.

Forex and competition both weighed on the company. Skechers (SKX) , Under Armour (UAA) , Adidas (ADDYY) , and V.F. Corp. (VFC) continue to jockey for a foothold in the athletic apparel space, but they are all trying to play catch-up to Nike's dominating position.

Circling back around to the margin concerns, Nike continues spending on its digital advantage by improving technology, so despite the impact to the bottom line it does appear to be pushing the top-line growth. With the Tokyo Summer Olympics just around the corner, cementing its space atop the sector and maximizing the potential of technology should help Nike continue sales growth in the high-single to low double-digits. Although comps are becoming more difficult, it is only because Nike recovered quicker than many expected. The company should not be penalized for that. 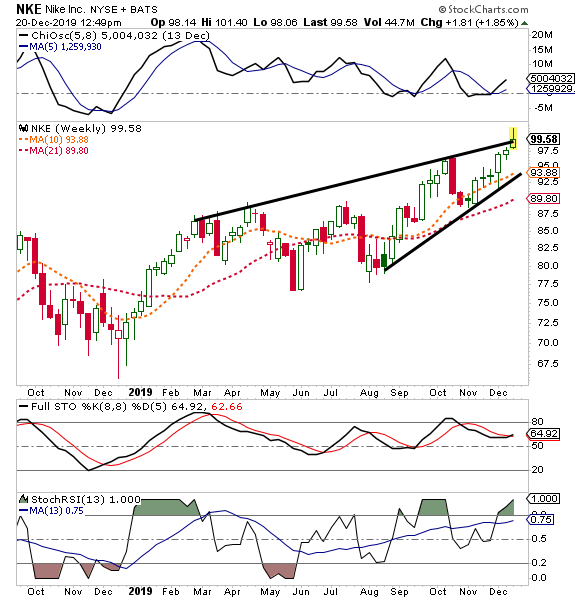 The tipping point now is the $100 level. Nike is trading into resistance on the weekly chart. A close today (Friday) above $100 could bring buyers in next week if we don't gap lower Monday. A close under $100 and the stock may be stuck in the $95 to $100 trading range after the New Year.

If I were already long, I would use $94 as my hedge or stop on a position; however, establishing a new position right on resistance doesn't offer much in terms of reward versus the short-term risk around 5%. In fact, I might be more tempted toward a put trade with a tight stop or a buy order around $95.

The recent post-earnings price action favors the bulls, so traders should take that into consideration, but with the holiday weeks approaching, the risk of buying into resistance does not justify the potential reward.

Get an email alert each time I write an article for Real Money. Click the "+Follow" next to my byline to this article.
TAGS: Fundamental Analysis | Investing | Markets | Stocks | Technical Analysis | Trading | Stock of the Day