Nike Inc. (NKE) corrected lower in October and then bounced and retested the October low in November. Can NKE restart the advance or will prices see more liquidation or distribution as prices re approach the September zenith?

Let's check out the charts and indicators for NKE and see what technical strategy could make sense for this name mentioned by Jim Cramer in a Real Money column Monday.

In the daily bar chart of NKE, below, we can see that prices have made a small double bottom-like pattern as it held chart support in the $72-$70 area. NKE spent a number of days below the cresting 200-day moving average line without starting a leg lower. NKE is now back above the 200-day line and also above the declining 50-day moving average.

It looks like volume was heavier in September and October compared to July and August, which suggests that traders were voting with their feet but the daily On-Balance-Volume (OBV) line does not decline all that much in October and held steady in November.

In the lower panel is the trend-following Moving Average Convergence Divergence (MACD) oscillator, which shows a cover shorts buy signal in early November and another cover shorts buy at a higher low last week. This indicator is close to crossing the zero line for an outright go long signal.

In the weekly bar chart of NKE, below, we can see a large base or consolidation pattern for NKE from early 2016 to late 2017. Prices turn up in late 2017. Prices retrace about $15 of their $35 rally. NKE has been trading back and forth around the cresting 40-week moving average line but we could see a strong close above the line this week.

The weekly OBV line shows some weakness from mid-September telling us that there has been some selling on this time frame. The weekly MACD oscillator is in a take profits sell mode and probably several weeks away from a new buy signal.

In this Point and Figure chart of NKE, below, we can see a lopsided double bottom pattern. A trade at $79.05 will be a double top breakout. An upside price target of $95.57 is being projected. 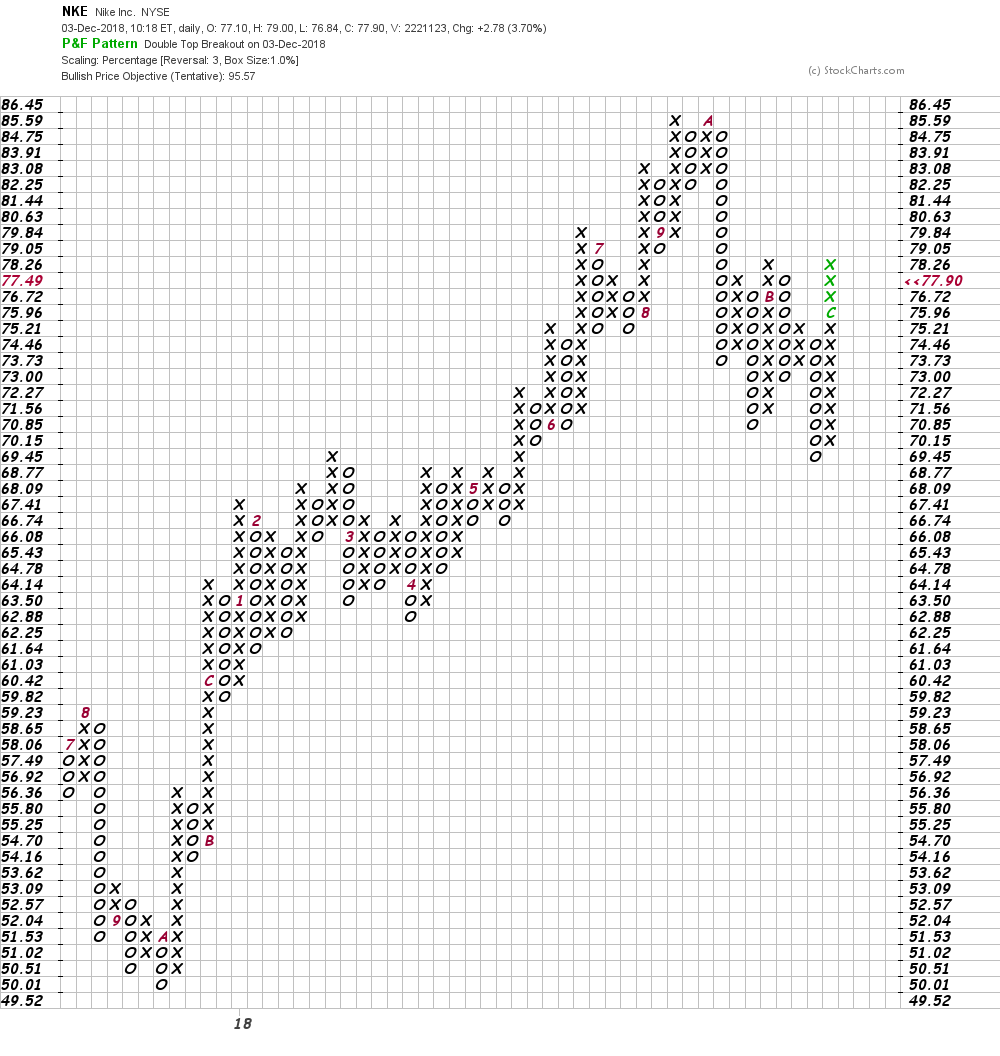 Bottom-line strategy: If NKE can close above its November highs Monday it will be a strong statement that prices can move higher into year-end. A retest of the $86 area is possible and the most likely nearby price target. Strength above $86 could open the way to a $95 Point and Figure target.