Nike Inc. (NKE) is trading higher in pre-market activity Friday as traders react to fiscal second-quarter results that topped earnings and revenue estimates at $0.52 and $9.37 billion (+10% Y/Y), respectively. Online sales were reportedly strong. I did not listen to the earnings call and if there was any new guidance, but I can look at the charts and indicators this morning.

In the daily bar chart of NKE, below, we can see a stock that has declined from early October. The pre-market action with prices up more than $5 is not shown but that would not alter the bearish signals over the past three months. Prices are below the declining 50-day moving average line and the cresting 200-day line. The 50-day average just edged below the 200-day line for what is commonly called a death cross.
The volume of trading has been stronger since September and the On-Balance-Volume (OBV) line has been weakening since late September and tells us that sellers of NKE have been more aggressive. In the lower panel is the 12-day price momentum study or indicator, which shows higher lows from October to November but the December decline shows more momentum on the downside as the November low was broken.

In the weekly bar chart of NKE, below, we can see a bearish alignment for the indicators. Prices are below the cresting 40-week moving average line.

The weekly OBV line has been declining from August and the Moving Average Convergence Divergence (MACD) oscillator is almost below the zero line for an outright sell signal on this longer time frame.

In this Point and Figure chart of NKE, below, we can see a downside price target of around $65. The rally Friday morning is not shown. A rally to $73 is needed to improve this chart. 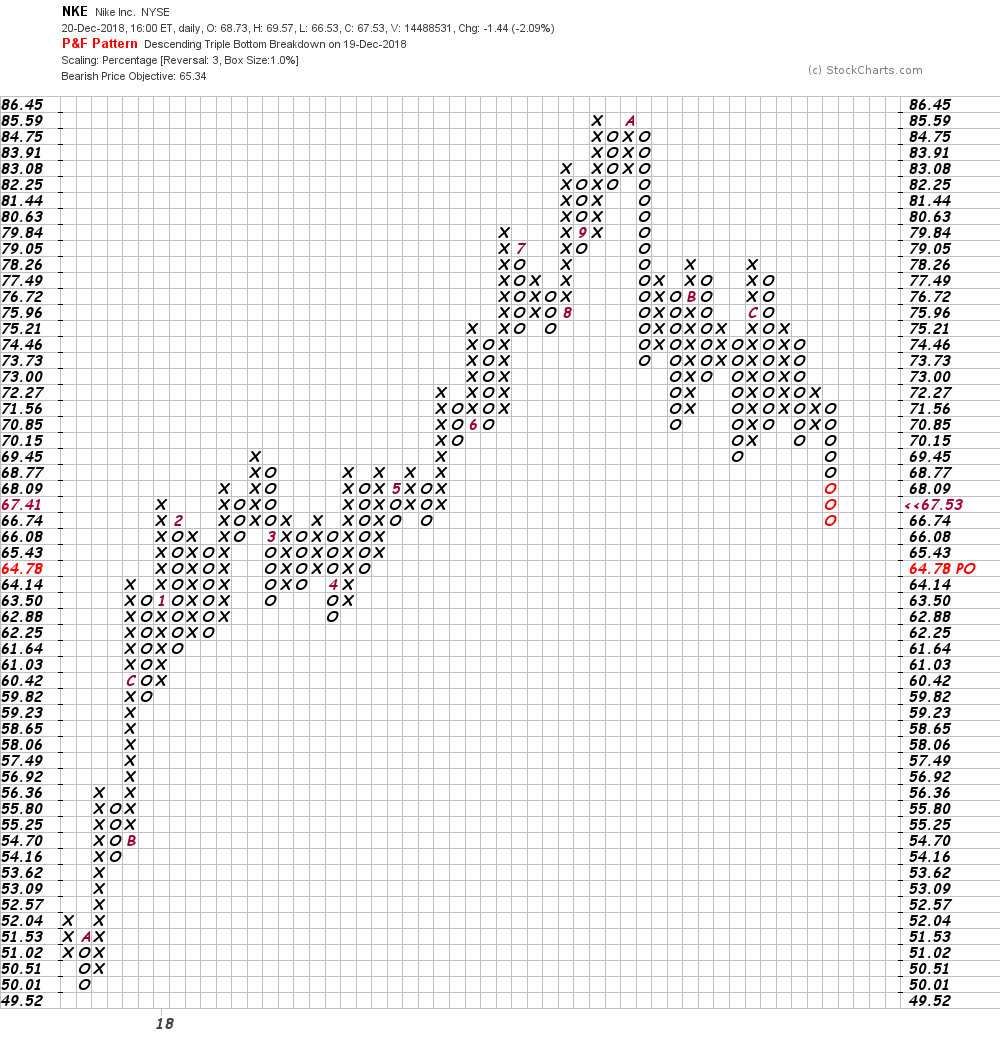 Bottom-line strategy: NKE is bouncing Friday morning. It could be the start of a turn higher but in my experience it would be better if NKE saw a period of new buying or accumulation before we get bullish again on the stock.
Get an email alert each time I write an article for Real Money. Click the "+Follow" next to my byline to this article.
TAGS: Investing | Stocks | Technical Analysis

These 2 Crown Jewels of the Electric Vehicle Industry Remain Private

They are Rivian and Lucid, with Chanje close behind.