I like to exercise. Always have. Therapeutic, It is. Old now, I do include both some kind of weight resistance training and some kind of cardio work on most days. Once I am done for the day, I usually stay done. Last night, though, I had done a virtual spin class earlier in the day, but I really needed to run. Sometimes that happens, and the force can not be explained. If the puzzle does not work in my head, or if the marriage hits a bump (you have all been there), or if I just need to pray, I am way better if I lace them up and enter the thoughtful trance-like escape that only intense physical exercise offers. I ran further, and did it faster than I have in a dog's age last night. Don't get nuts, I am old, it was dark and in New York it was raining.

I ran on a treadmill, which does slightly cheapen the pace I ran a little, because in real-life the earth is not made of rubber and does not move in the other direction. Something happened. I saw, or I think I saw what I had seen all day, but just a little bit clearer. Hopped right off of that treadmill, and sauntered right into my office. On went all of my machines. Good, not quite 8 p.m. yet. That's when after-hours trading at ARCA closes. After that the wild west gets wilder. Unless I have to cover an error, I do not like to trade anywhere after 8 p.m. in N.Y. By then, I should be watching hockey or baseball depending on the season.

What did I do after that "high speed" (for an old dude) one-man thought session? OK, I will tell.

I halved my long positions in McKesson (MCK) where I was up small, but nowhere close to my early "Operation Warp Speed" expectations, and Merck (MRK) where if not for the magic of using the options market to manipulate net basis, I would be down small.

Where did those funds go?

I padded a slew of existing longs that had been pounded during the regular session. I purchased shares of Apple (AAPL) , ServiceNow (NOW) , Advanced Micro Devices (AMD) , Palantir (PLTR) , and Zscaler (ZS) .

Simple, at least to my thinking even though most (all) of these names trade well above basis. Tech is being pounded right now. I think that Tim Cook, Bill McDermott, and Lisa Su are a cinch to make the CEO all-star team. Then I thought about individual privacy and the nefarious use of data/information while I watched Palo Alto Networks (PANW) get taken to the woodshed after reporting a solid quarter with pedestrian guidance. Zscaler reports this Thursday and has always been my favored name in that field, and Palantir is well, Palantir. Anyone who thinks that business goes away is fooling themselves.

The lesson there? Not that I won't get run over on this tranche of purchases. Sure, I bought them all either at, close to, or below their individual Monday lows. Tuesday brings no guarantees. I buy what I like when it goes on sale, from blue jeans to breakfast cereal. Oh, and that includes the tech sector.

Did I tell you that Fed Chair Jerome Powell testifies today... and tomorrow?

The Day That Was

Defining Monday is not easy. The Nasdaq Composite and Nasdaq 100 stood together and took it right on the chin. The S&P 500 got slapped, but not slapped silly. The Dow Jones Industrials held its own thanks to Walt Disney (DIS) and Caterpillar (CAT) . The Transports turned in another nice day led by the airlines and Kirby Corp. (KEX) , which is marine transportation for those who were about to ask. The small-caps? Don't ask. Really. The Russell 2000 surrendered 0.69%, while the S&P 600 rallied 0.6%. True story.

I wrote extensively on Treasury markets twenty-four hours ago, and that was indeed the driving force across financial markets on Monday, but I need to point out a couple of peculiarities that perhaps lent themselves to my burst of confidence last night. Yes, I see where the futures are trading at zero-dark thirty. We'll know more when they ring the bell at 11 Wall Street, I suppose.

I found no panic in Monday's action. While the VIX did spike, then drop and then spike again, the mid 20's does not rattle my cage. Remember, if you're reporting the VIX in percentage point movies, you probably do not belong in finance. Secondly, put /call ratios are extremely tame. Take a look at this:

See the panic? Me neither. In fact, the chart does not really change much if we strip out either index options or single stock options. There was some distribution. Don't get me wrong, I do not downplay Monday's price discovery, but the action, and it has been five consecutive losing seasons for the S&P 500, four of five for the Nasdaq Composite, is still in my opinion confined to profit-taking. There is not a lot of dough being spent on the purchase of portfolio protection.

What did "they" sell? High-priced names where they had profits. "They" sold the entire Tech sector, from software to hardware to semiconductors to (and most especially) renewable energy equipment. What else? FANG? Sure, but expand upon that. They roasted FATMAN, with an extra special back-alley beatdown reserved for the "T", which is Tesla (TSLA) . Where did they go? They kept on keeping on right on into the banks and oil. Reflation? Growth? Inflation? All of the above.

Such a nice kid. She was always there to help the indecisive. "There Is No Alternative" made playing this game so easy. I would not say that TINA is dead just yet. We have seen a few head fakes over the years, but TINA looks different. Something has changed.

I think TINA may have been crowned with a TIARA. Why? Because it's becoming apparent that There Is A Real Alternative. Prepare yourself. You are soon to find out if the last few years were you, or the market. Some of you will disappear.

Can't say investors have not been warned. Treasury Secretary Janet Yellen spoke up about bitcoin and cryptocurrencies on Monday, and I think she was as clear as a bell. You need to understand this. Yellen said on CNBC:

"To the extent that it (Bitcoin) is used I fear its' often for illicit finance. It's an extremely inefficient way of conducting transactions, and the amount of energy that's consumed in processing those transactions is staggering."

How I read that is as a warning shot. Regulation is coming, and perhaps soon. In addition to pointing out the illegal activity (terrorism, drug dealing, money laundering) that anonymous transactions encourage, and in order to make this regulation palatable politically, the fact that cryptocurrency mining leaves an absurdly outsized carbon footprint on the planet will be used to get everyone on the same side. The Treasury Secretary went on:

"Too many Americans don't have access to easy payments systems and banking accounts, and I think this is something that a digital dollar, a central bank digital currency, could help with."

I read that as, not only is a much tighter regulatory regime planned for independent cryptocurrencies, but that there is clear central bank interest (globally) in replacing crypto with a blockchain-supported version of existing reserve currencies. You see, the threat posed by cryptocurrencies is one of decentralized power. Power over monetary or fiscal policy. Power over money supply. Power over taxation. These powers will not be given up without a tremendous fight. Did you really think that a parallel economy would be permitted to exist outside of federal or global control? How foolish if one slows down and thinks about that. This has nothing to do with whether bitcoin is a store of value or can be developed into a medium of exchange. This is about power, and that is all.

After the feds eliminate the competition created through the use of cryptocurrencies, they will come for cash too. Pay a contractor a different rate if you pay cash? Hire a few helping hands for a daily cash rate? All part, as is bitcoin, of an underground, untrackable, un-taxable economy.

The federal government, all sovereign governments, are going to be up against a fiscal wall, post-pandemic. Just how much, from the federal government's point of view, could tax revenues be enhanced once all transactions are taxable? Once all savings accounts bear either a negative nominal interest rate, or a substantially "lower than market" interest rate as a "convenience tax"?

Cryptos and cash are both headed for a real fight. For their own existence. You don't see this coming? Really? That's adorable. 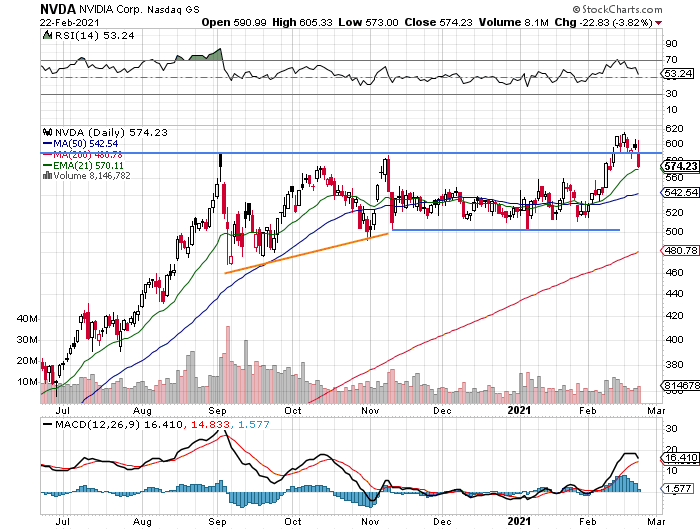 Seems like just about a week ago, I showed you this chart, as I brimmed with exacerbation. Nvidia (NVDA) had broken out of its basing pattern. Onward to $670 it was for me.

A handful of sessions later, NVDA has, with the entire tech sector, lost its mojo. The daily Moving Average Convergence Divergence (MACD) looks awful. There is certainly no concern of NVDA bearing an "overbought" reading for Relative Strength, and more importantly, the name closed on Monday... threatening to lose the 21-day exponential moving average (green line), which will shake out the Glenn Miller fans (swing traders).

I will not add to NVDA until I see what happens next. Failure here almost certainly means a run at the 50-day SMA. That's more than another $30 off and you know how I like a good sale.

(Apple, AMD, Disney and Nvidia are holdings in Jim Cramer's Action Alerts PLUS member club. Want to be alerted before Jim Cramer buys or sells these stocks? Learn more now.)

Get an email alert each time I write an article for Real Money. Click the "+Follow" next to my byline to this article.
TAGS: Earnings | Federal Reserve | Futures | Indexes | Investing | Markets | Stocks | Trading | Cryptocurrency