I'll be honest, I did enjoy the broad boost in positive sentiment that could be felt across equity markets, and quite frankly across the trading floor of the New York Stock Exchange on Thursday afternoon. Now, I can be wrong. You and I both know this. Though I did expect October to be volatile (a very easy thing for financial talking heads to say), I did not expect, and certainly did not call the correction that hit most of us in the rib-cage last month.

However, even though I still see issues down the road regarding the problems that can be caused by both hostile monetary policy and reckless fiscal policy, November sets up as very interesting. The veil of uncertainty over who will control congress -- in particular, the House of Representatives -- will be lifted by Tuesday. This will be a market positive, as long as gains on the left fall short of a veto-proof majority, and nobody sees anything close to that happening. Those tweets though...

Everything Chinese is now suddenly hot. President Trump tweets about a "very good" conversation with President Xi. "The discussions are moving along nicely," as apparently President Trump seems to have asked plans to be drawn up for some kind of trade deal with China ahead of the two men meeting toward the end of the month at the G-20 summit in Buenos Aires. International markets cheered this news across the globe -- from China to Japan to Europe. Safe-haven assets, such as the U.S. dollar and U.S. sovereign debt securities, finally seem to be taking a breather. The softer U.S. dollar alone is a welcome support for our domestic marketplace.

Tough question. Some are mentioning this. Though there is no doubt that both nations have started to feel enough of the strain created by this conflict to motivate negotiation. I don't know President Trump, but I have spoken to his economic adviser Larry Kudlow many times off set as I have followed him on financial TV a number of times. I know him to be careful in his words, and in my opinion... to be very honest. The fact that Mr. Kudlow used the word "thaw" in describing U.S. / China relations after the presidents spoke is, in my opinion, somewhat significant. The danger of course, would be a failure to make progress in Argentina. Both presidents need to be able to present a perception of victory.

One more thing. I guess that many of you have noticed the Commerce Department's indictment of Fujian Jinhua, a mainland Chinese corporation, and Microelectronics Corporation of Taiwan for stealing trade secrets from U.S. memory chip manufacturer Micron Technology (MU) . The fact that three Taiwanese nationals are included in this action might be seen as some kind of olive branch by the Chinese government. Might be.

This might just be the monthly "Jobs Day" that I have been asked about the very least since I have been doing the financial media circuit. It is as if suddenly nobody cares. I think that they better care. The central bank has been overtly hostile toward U.S. economic growth. Though we all see the obvious danger to the yield curve caused by putting upward pressure on short-term interest rates while simultaneously draining potential liquidity, those making these decisions do not. Six years later, the permanent damage done to the yield curve during the "Operation Twist" era has never been addressed, nor even mentioned as an economic condition in need of repair.

That said, instead of buckling down and doing the necessary homework, our central bankers will likely focus solely upon today's wage-growth numbers, as well as the results from next month's BLS results -- when they decide on once again increasing their target for the Fed Funds Rate on December 19, the next meeting that will come complete with the dog and pony show.

Although we already know that today's numbers will be a little lumpy, thanks to the storms that hit the panhandle of Florida and the U.S. southeastern coastal states, we also know that the year-over-year print for wage growth that could hit the tape above 3% is dangerous going forward. Are we rooting against out own labor force? Of course not. We just hope that if the growth is there, that it sticks.

What has become obvious, I think, is that U.S. oil producers as well as international players have been aggressive ahead of U.S. sanctions on Iranian oil. That action will be implemented on Monday. Of particular interest this week, I thought was not the domestic inventory build. That did not surprise all that much. The fact that U.S. production had hit an incredible 11.3 million barrels per day? That's a shocking print. And in my opinion, the primary reason for how sharply crude prices have declined, along with dollar strength.

My thought here runs along the lines of the pre-tariff inventory builds that we have seen across other industries that now impact domestic manufacturing surveys. How long will it take the planet to work through this runup in production from the U.S., from Iran, form the rest of OPEC? It could take months.

In the meantime, I am adding to my exploration and production names on the weakest days for the group. My thought is to inch along in small increments here. For me, those names are British Petroleum (BP) , Royal Dutch Shell (RDS.A) , and ExxonMobil (XOM) , which reports Friday morning. I would add to oil services, but I have been long and wrong that space for a bit. My Schlumberger (SLB) long position is sizable enough, for now. The underlying positive for all of these names is that they are all solid dividend payers, and I feel belong in any well-diversified portfolio. (BP and SLB are holdings of Action Alerts Plus.)

About a mile and a half from where I live, on a main road, there is a little place that sells cheeseburgers, french fries and milkshakes. I mean the food at this place is delicious. Every time I drive past it, my brain really wants to stop there for a meal. It's tempting. This is where having a spouse comes in handy. I will forget my age for a good cheeseburger. My bride will not.

Apparently, we are not the only ones currently driving past Shake Shack (SHAK) locations these days as we go about our business. SHAK reported its third quarter Thursday night. You may have been waiting on Apple's (APPL) results at the time, so perhaps you did not notice. SHAK beat expectations for both EPS and revenue. The bad news? Same-store sales decreased. That's right... -0.7% versus a projected +0.9%. How does consensus miss the mark that badly, unless every one is copying someone else's homework. If this was fifth grade back in the day, the nuns would have had a field day.

The firm has also guided toward a few less new store openings than had previously been planned, but actually raised its corporate outlook for full-year revenue (but still below the questionable industry consensus). Needless to say, investors did not only flee this name overnight, they have been in flight since early Summer. 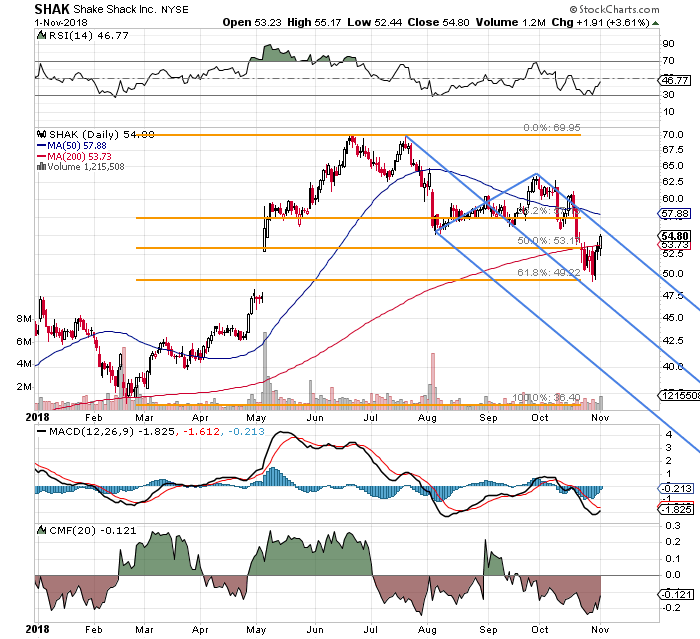 What screams out from this year-to-date chart of SHAK is the strict technical obedience that this stock has shown to both a 61.8% retracement of the February-through-June move higher, and the recent upper chamber of the downward-sloping Pitchfork model.

Given that this name is off more than 5% overnight, it becomes difficult for me to price options' premiums for you in the wee hours of the morning. I will tell you this, however. I think the stock is too expensive in relation to sales. Way, way, way too expensive. I would have loved to have gotten short this name this week, but I'm not that sharp.

SHAK: What The Cheeseburger Kid Can Do

What I can still do, in a risk-controlled way, is get long what is known as a "bear put spread." In a Utopian world, I would like to purchase $50 puts expiring the third week of December, while writing $42.50 puts of the same expiration. If the underlying equity adheres to my Pitchfork, this trade is doable.

The trader would be at risk for the net debit paid on the premiums. That's the worst case. Max revenue on these positions would be $7.50. My thought is if I can put this trade on for $3 or less, for me this becomes worth it in terms of the risk/reward. Otherwise, I'll find something else to do Friday morning.

Get an email alert each time I write an article for Real Money. Click the "+Follow" next to my byline to this article.
TAGS: Investing | Stocks | Food & Drink | Consumer Discretionary