We're Off To Never, Never-land

It took a few minutes. OK, maybe more than a few.

Why not? European Central Bank (ECB) President Christine Lagarde had been on the tube it seemed forever. So boring. Hmm... Baseball Reference... let's see who got traded in 1991. Wait, what was that? "Strategic Review?" "New Policy Mix?" Is that good? The algos that run equity index futures markets could not tell.

Wait, there's more. Chinese President Xi Jinping spoke to a U.S. business delegation in Beijing on Friday: "We want to work for a Phase One agreement on the basis of mutual respect and equality."

OK, that seems fine. "As we always said we don't want to start the trade war, but we are not afraid. When necessary, we will fight back, but we have been working actively to try not to have a trade war." Whoa. Combative? Hmm, no, then yes, then no again. Should have seen S&P 500 futures and the U.S. 10-year note bang around on that one. Gee whiz. You guys miss so much sleeping at night. Hangin' with raccoons.

Big talk? Liu He has invited U.S. negotiators to China for a fresh round of face-to-face talks (guess we're not that close) ahead of the Thanksgiving holiday on this side of the vast expanse. Again, the passage of the Hong Kong bill in both houses of the U.S. legislature was the ethically correct thing to do. Also makes it extremely difficult for both sides to press palms, sign paperwork and smile for the cameras. Say cheese.

The S&P 500 finished the session in the red for a third consecutive day on Thursday, the Nasdaq Composite for a second. Neither sold off extremely hard after seemingly sending weaker signals. Breadth remained rather negative, but trading volume tailed off considerably at both of New York's major exchanges for the day (and I spent time at both of them). The usual buzz seemed just a bit dulled.

I'll tell you what surprised me a little on Thursday. Was the out-performance of the energy sector a shock? Not really. U.S. oil inventories were below expected levels this week, OPEC is talking about further production cuts with or without Russia, and the sector trades at the greatest discount to its five- (29.1) and 10-year (20.4) averages (by far) of any S&P sector in terms of aggregate 12-month forward-looking earnings ratio (17.2). Nor did it surprise that the bond proxies got hit in the teeth with the volatility seen over recent days at the long end of the U.S. Treasury curve.

The thing that caught my eye on Thursday was the overall resilience of the Nasdaq Composite (-0.24%), the Nasdaq 100 (-0.22%), and to some degree, the Technology Select Sector SPDR ETF (XLK) at -0.5% in the wake of the UBS downgrade of Lam Research (LRCX) , Applied Materials (AMAT) and KLA (KLAC) to sell ratings prior to the opening bell. The entire semiconductor equipment sector was just pounded, and this pounding was compounded (like that?) by a downgrade-inspired bout of profit taking in Advanced Micro Devices (AMD) , though it did not spread to broader markets. Heck, the selling did not even spread across the semis after Intel INTC apologized to customers for being unable to keep up with demand.

1) The country music industry is not going to like this.

2) Could help urban cowboys remain undetected by enemy radar should that need arise.

3) I got old much faster than I expected.

4) Did you really think that the windows wouldn't break? C'mon, dude.

It was reported on Thursday the Fed Chairman Jerome Powell wrote in a letter to Rep. French Hill (R-Arkansas) that the U.S. had at this time no plans to launch a digital currency. Powell sees this as something that would be difficult to implement in the U.S. I think I agree.

My thoughts on this are that the U.S. dollar is already as digitized as any given how much the consumer wants or needs it to be. While it is true that a fully digitized currency would aid in law enforcement as well as ensure all taxes are paid, there would also be a reduction in freedom as all transactions at all times form a trackable history for each individual. All good if one is clean as a whistle, and so are those doing the tracking. A lot of trust required. Maybe more trust than the people are willing to offer. It will happen. Sooner or later.

Readers likely noticed the Amgen (AMGN) acquisition of psoriasis treatment Otezla from Celgene as Bristol- Myers Squibb (BMY) closed that deal on Wednesday evening. The issue there was the Federal Trade Commission's concern that Bristol-Myers would end up as provider of both Otezla and Orencia, a treatment for psoriatic arthritis. So, for a cool $13.4 billion, Amgen scoops Otezla ahead of the Bristol deal. 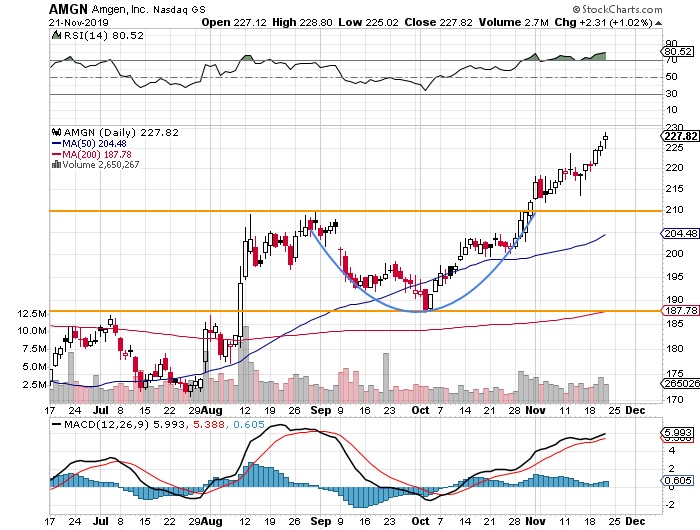 It has been a while since you've seen this chart. I re-drew the orange basing pattern that provided for the current breakout. You have seen it before. Though the stock is now technically overbought, my belief is that we still have some room to the upside, but maybe not as much as some of the other biotech/pharma names as at 14.3x forward earnings this name remains under-valued, but perhaps less so than some others.

Splunk (SPLK) reported third-quarter performance on Thursday evening. Did it ever.

Is it all good? Well, Splunk did increase guidance. Fourth-quarter revenue is expected to land at $780 million versus Wall Street expectations of $768 million. The firm expects full-year sales to end at $2.3 billion to $2.35 billion, up slightly from $2.3 billion.

Great, but that's not what I asked. Is it all good?

The numbers do not stack up against the Rule of 40 (sales growth in percentage terms plus profit margin must equal more than 40). Kind of. I mean, the adjusted numbers do. Growth of 30% plus adjusted operating margin of 16.8% -- woo hoo !! However, playing the game the GAAP way, you still have 30% growth, but operating margin becomes -7.6%. Free cash flow for the quarter landed at $-162 million.

I am long this name and I am celebrating this overnight pop. I am also keeping it real. 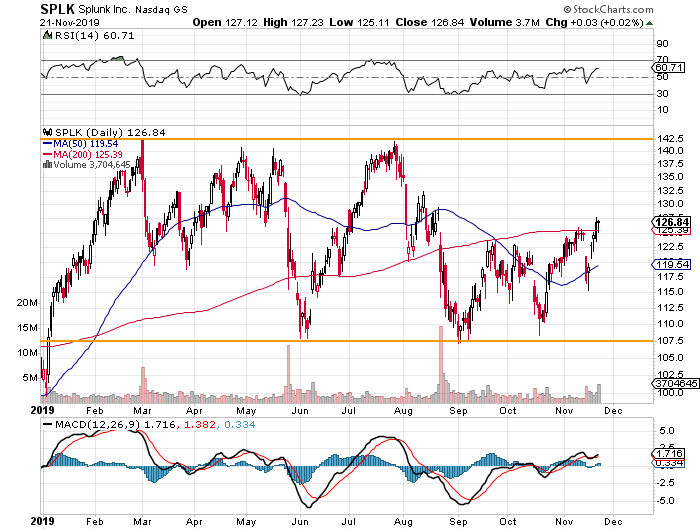 The shares are trading above $135 through the wee hours. Once they calm down, traders will see that SPLK remains range-bound. I will not be changing my posture here on Friday morning.

Add: Not at this time.