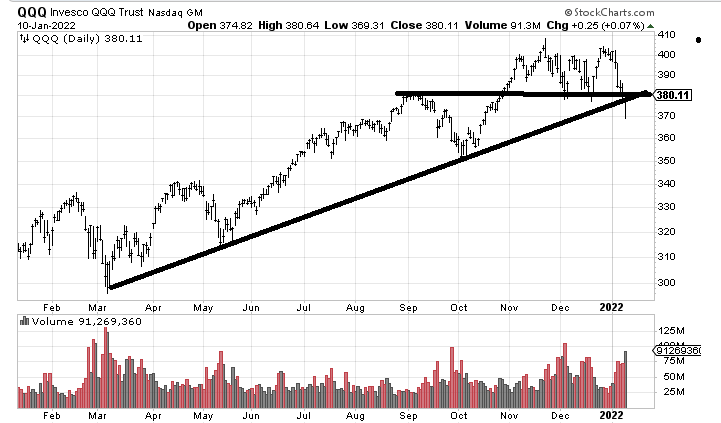 The bad news is that new lows increased. They didn't explode, but whereas there were 710 new lows in early December, there were 740 on Monday. That means no positive divergence. We have, however, come to learn that 700-plus new lows (and new highs) tends to mark a temporary (short term) top or bottom.

Can the Invesco QQQ get back over $380? That is the question. And, if so, the question is how fast will folks get bullish on growth again? I suspect if there is follow through by the end of the week, we'll see sentiment shift.

Monday's put/call ratio was 1.13 at one point during the day (near the lows of the day), but even by the end of the day it was still 1.01, so it remained high for the day. The test is if we get a solid green day does that collapse? Time will tell.

But the market was heading into an oversold condition, so there is time for us to see how that sentiment develops. I think even if we don't have any follow through on Tuesday, we'd still have an oversold Nasdaq market by the latter part of the week. So, I wouldn't fret too much if there is no follow-through. In fact it might be better for sentiment.

Away from that, I was asked about gold, which has done little over the last several months except trade in a range. I see it as something that can rally to the $172-$173 area, but mostly it's trapped in a range. Sentiment isn't even one sided on it. There is no love and there is no hate. The Daily Sentiment Index (DSI) is at 35, which is neutral.