Cirne explained that New Relic collects millions of data points every second from its users to ensure their applications are performing as expected and their users are getting the intended experience.  Among the company's biggest clients is Epic Games, makers of Fortnite.

When asked about competition, Cirne said while others may offer pieces of what New Relic does, no company has a complete application monitoring experience on a single platform. Sounds like good fundamentals so let's complete the picture with charts and indicators.

In the daily bar chart of NEWR, below, we can see a small top-like pattern in June to September and a bottom pattern from October to now. The top-like pattern does not have a lot of height or amplitude and hence prices only decline from above $110 to briefly below $75.

The moving averages have improved with prices now above the slightly rising 50-day line but just a fraction below the slightly rising 200-day line. The trend-following Moving Average Convergence Divergence (MACD) oscillator has given a number of cover shorts signals from early October and now this indicator has crossed the zero line for an outright go long signal.

In the weekly bar chart of NEWR, below, we can see that prices have performed strongly over the past three years. NEWR stayed above the rising 40-week moving average line until last year. Prices are close to closing back above the 40-week line, which is still rising.

The weekly OBV line shows a rise until June of last year and a shallow decline into this year. The OBV line looks like it is turning up again, which would signal that buyers have turned aggressive again. The weekly MACD oscillator is close to a longer-term cover shorts buy signal.

In this Point and Figure chart of NEWR, below, we can see a base or bottom pattern and an upside price target of $101.94 being projected. A trade at $102.38 would be a major upside breakout and could open the way to further gains. 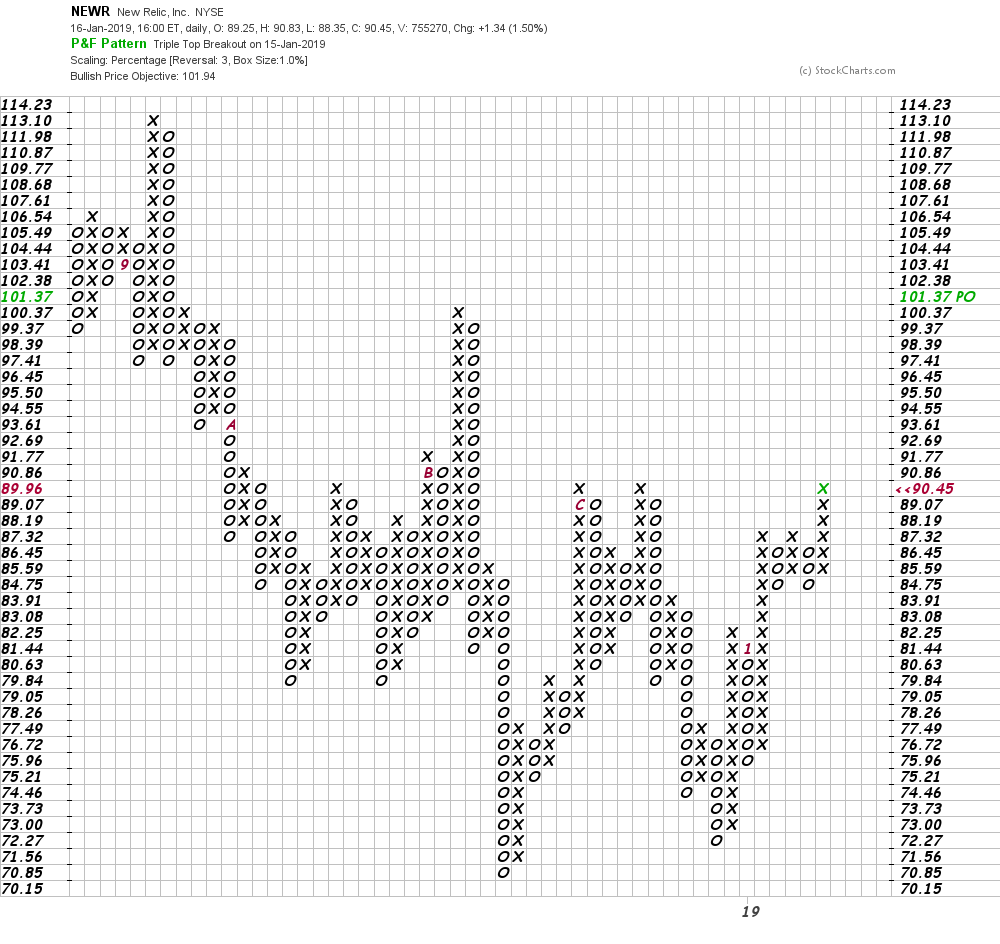 Bottom-line strategy: If you watched Mad Money last night or you recorded it for today you got the fundamental story. The three charts above tell a bullish technical story. Traders who like these two outlooks could go long NEWR at current levels risking below $80. Look for a rally to the $110 area in the next couple of months

Get an email alert each time I write an article for Real Money. Click the "+Follow" next to my byline to this article.
TAGS: Investing | Stocks | Technical Analysis | Technology | Gaming