So much time spent in fear of making mistakes.

Mistakes are how one adapts. Adapting is how one grows, matures, overcomes. To be consciously self aware. To be able to see clearly. To overcome some perverse need to experience penitence. Or to reach for some kind of unearned sanctity of ego.

Tightrope. Walking the straight path as the individual balances or tries to balance the overt responsibility of responsible adulthood with the inner desires of that part of the brain that never grew up.

Why work hard? For it was Roman philosopher Seneca who told us, "Luck is what happens when preparation meets opportunity."

Why carry on? For it was George Washington who told us, "If we can not learn wisdom from experience, it is hard to say where it is to be found."

Why should we help each other? St. Francis of Assisi told us, "Where there is charity and wisdom, there is neither fear nor ignorance."

So, we now come full circle. We prepare so as to be ready. We learn through both success and failure. We then, once confident, must look to our left and to our right, for there can be no forward progress unless we take the hand of the frightened. We move as one. As quickly as the slowest amongst us. Only fear and greed can prevent us all from using our gift (we all have something) to brighten the way for those who still can not see.

"We can easily forgive a child who is afraid of the dark, the real tragedy of life is when men (humankind) are afraid of the light." -- Plato.

Did you hear it? I'm not sure just what I heard either. I thought I heard a siren, a warning if you will. Not here, not in your face, but barely discernible... out in the distance.

What we do know is that breadth was poor on Monday. This is nothing new. The weakness at the headline level was "newish," but the internals have not changed. Nine of 11 sectors went red for the day. Still led by more defensive sectors. Not the Utilities though as they compete directly with yield for your investment dollar.

Growth finished near the bottom again, as it appears over the weekend investors had not changed their minds significantly regarding internet, media, software nor semiconductor-type names. Ahh, the semis. The Philadelphia Semiconductor Index gave up 2.52%, underperforming the Dow Jones U.S. Software Index (-1.1%), the Nasdaq Composite (-0.98%), and the Nasdaq Composite (-0.96%). More on that in a little bit.

Though losers beat winners quite decisively at both of New York's primary equity exchanges, and though declining volume also beat advancing volume at both exchanges, there was indeed no panic, no broad professional distribution, no run for cover. Aggregate trading volume decreased significantly on Monday from Friday for NYSE-listed names, as well as for names subordinate to the S&P 500. Aggregate trading volume also fell slightly for Nasdaq-listed names, as well as for names subordinate to both the Nasdaq Composite as well as the Nasdaq 100.

Traders and investors need to be fully cognizant that not only that Philadelphia Semiconductor Index, but both of our small-cap indices, the S&P 600 and the Russell 2000, saw their respective 21-day exponential moving averages (EMAs) pierced but not exactly broken on Monday.

Here, you'll see the small-caps pressuring their 50-day simple moving average (SMA) even prior to losing that 21-day EMA, while for the semis.

The immediate danger appears greater as the 21-day line can be lost, along with the swing trading crowd, prior to any support that might be found among portfolio managers at our 50-day line.

The Ballad of Nvidia

There's a lesson here. A lesson born of experience. Last Tuesday, I wrote to you in this column that in response to Jensen Huang's investor event, I was holding out for my Nvidia (NVDA) price target of $645. What have I constantly taught? Never all in nor all out, but you act at price targets and panic points, right? You act and then you adjust fire in response to a changing environment.

NVDA peaked above $648 last Thursday, and closed at $614.47 last night. Of course I'm still long. Of course I am long less than I was when I wrote that piece last week.

Always, always, always stick to your rules. Always. This is why we have targets, pivots and panics.

Unlike sell-side analysts who can arbitrarily change price targets without even offering panic points, we have skin in the game, Unlike the community of sell-side analysts, we have more on the line than mere professional reputation, We must eat, and in order to eat we must kill. Shame on those who see their own plan work to their advantage and then fail to act.

Why the ugly day for NVDA, and for more broadly the semiconductor space?

The U.K.'s Department for Digital, Culture, Media, and Sport has ordered that nation's antitrust regulator, the Competition and Markets Authority, to begin a "phase one" investigation to assess Nvidia's acquisition of Cambridge (U.K.) based Arm Holdings from Japan's Softbank Group on grounds that the deal could create national security concerns. For their part, Nvidia has publicly stated an intention to leave the Arm brand independent and based in Cambridge. The deal is under review (which is normal) by the Federal Trade Commission as well in the U.S.. The potential catch here could be that Nvidia competes directly against Qualcomm (QCOM) , Intel (INTC) , and Advanced Micro Devices (AMD) , all of whom are reliant as clients upon Arm Holdings as a key supplier.

I think the kick in the pants for the stock on Monday came from Citigroup analyst Atif Malik who spoke quite bluntly on the complexity of getting this deal through all of the required approvals in the face of both antitrust and national security concerns, plainly saying, "We lower our deal-closing probability to 10% from 25%." Whoa. 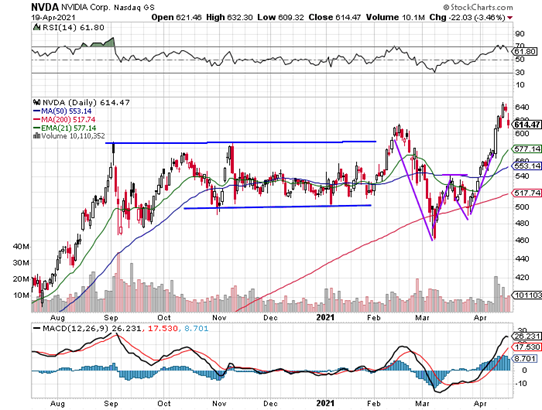 One. Market reactions like this are overreactions due to the wonder of keyword-reading algorithms. Two, The Brits have told us that they'll have something by July. If you have not yet acted at all, there is no reason to panic, but that does not necessarily mean to sit on one's hands.

There are two spots that such a volatile stock could move toward without hitting warp speed. The first would be the $588 level that had been the stock's resistance from September through January. You can see it, above. So can the algos. The next would be the 21-day EMA, currently at $577. Those two may converge by the time the stock gets into the high $580s.

My current plan would be to add the tranche sold at $645 back in that area. Should that spot fail, the shares probably return tio pivot, hence I will plan a "panic" sale (making it anything but) only upon the breakage of the 50-day SMA, currently $553, but likely be higher than that when we need it.

...Starting to build a long position in International Business Machines (IBM) after last night's release and well before the planned spinoff, but not today. Unless of course, the ugly stick shows up for the market more broadly and takes IBM down with it. Then, maybe we start with a Spanish piece of Eight.

(Abbott Labs, Nvidia and AMD are holdings in Jim Cramer's Action Alerts PLUS member club. Want to be alerted before Jim Cramer buys or sells these stocks? Learn more now.)

Get an email alert each time I write an article for Real Money. Click the "+Follow" next to my byline to this article.
TAGS: Earnings | Futures | Indexes | Investing | Markets | Small Cap | Stocks | Trading | Semiconductors & Semiconductor Equipment | U.S. Equity