By STEPHEN GUILFOYLE Jul 18, 2019 | 12:14 PM EDT
Stocks quotes in this article: NFLX, DIS, AMZN, T, AAPL, CMCSA
Netflix ( NFLX) CEO Reed Hastings has a strong history of excellent performance behind him. Time and time again, he and his streaming entertainment giant have managed to only increase relevance as they have together conquered the world, as potential competition in the space had been slow to develop.
The worm, they might say, has finally started to turn. For the firm's fiscal second quarter, Netflix reported earnings per share of 60 cents, which beat expectations, but is still down nearly 30% from the same period last year. Revenue generation printed at $4.92 billion, or year-over-year growth of 26%, yet just barely meeting consensus. The real headlines were in the details however, and the details were less than impressive.

First, Netflix added fewer new global subscribers than projected. Much fewer. The service brought on 2.83 million new customers vs. the 4.8 million that the analyst community was looking for. Even worse, the number of U.S. subscribers actually contracted. That's right, 126,000 Americans called it quits, the first quarterly decline for this metric in eight years.
The firm acknowledges that price hikes may have had something to do with customers leaving the service. Duh. Still, the guidance for the third quarter seems aggressive, at least to me.
For the third quarter, Netflix expects to add 7 million paid memberships, which would be up from 6.1 million for the same period last year. This is despite the fact that for the second quarter of 2018, the firm added 5.5 million subscribers -- nearly double the number for this recent quarter. The firm also expects to generate $5.25 billion in revenue for the third quarter that would produce earnings per share of $1.04. That would be 16.8% earnings growth on 31.3% sales growth.
Can they get there, with Disney ( DIS)  Plus on the way in the fourth quarter, with Hulu noticeably improving the quality of that product, with Apple ( AAPL) , Comcast ( CMCSA) , and AT&T  ( T) all ramping up for a game Amazon ( AMZN) Prime is already in?

Does the slowdown in global subscriber growth, as well as the decline in U.S. subscribers, add fuel to the idea that the firm has less pricing power that it had previously thought? Does this make the entire business -- which up until now had been a lot less competitive than it is going to be -- ripe for greatly reduced margin performance?
Disney is lower on these poor Netflix results. Definitely questions hard to answer right now. Hard to answer if one is long on Netflix, that is. On this matter, CEO Reed Hastings stated: "I think our position is excellent, we're building amazing capacity for content. Our products have never been in better shape. Our rate of investment is extremely high. So if investors believe in internet television, which I think is an easy one to get there, then our position in that market is very strong."
Hmm, OK, Reed, let's look at that rate of investment.
Netflix spent $3 billion on programming in the second quarter. It spent an additional $600 million just marketing these shows. The firm spent $594 million more than it generated. The firm does not accept advertising as a means to pad revenue, and instead relies upon customer satisfaction with the programs.
Yet, popular programs are leaving. It's not just "Friends," and "The Office," but Disney's content over time, as well. Reruns of older shows still add up to more viewing time on Netflix than does the firm's original programming. The latter, however being where the firm will have to rely more so than before.

I am the one who made the bold short call at the start of the year, only to watch the shares run higher in those early weeks. I initiated short positions in NFLX on three occasions, and had to trade my way out of trouble each time, ending up with small net profit. That's because I can trade; the call I made was incorrect. Though I dislike the name generally speaking (I do like the product, I am one of the U.S. subs who did not cancel), I went into Wednesday evening's numbers with a small long position, which I covered at a loss within seconds of the release. The point in this honesty is just full disclosure. I know some of you trust me. I want you to understand that I have not performed well in this name. It may be prudent for you to prejudice your opinion of my analysis with that in mind.
I still believe that Netflix goes lower long-term. Though the shares do clearly benefit from a certain cult-like following as do other seemingly over-valued growth stocks, NFLX does not run with an overly high level of short interest. As of late June, little more than 4% of the entire float was held in short positions. The area around 7% or 8% is where I draw the line, so this one for me, is OK to re-short. But does Netflix still deserve to be valued as a leading growth stock?
Revenue growth still has stayed pretty consistent. This quarter was no different. Walt Disney steps to the plate in November. Disney Plus will be cheaper to the consumer than is Netflix. I am long that name, and I am biased. That service will be a must for many households, especially for those with children. Disney, since taking control of Hulu has already improved that product, and that product will compete head-to-head with Netflix for the U.S. over-18 viewer. I see that gap closing. Then there is Disney's ESPN Plus, for a guy like me, the greatest streaming TV app of all time. I watch it at some point everyday, and I bet many sports fans do.
This Disney package bundled at a discount will be in my opinion far more attractive to family households than will Netflix. The thought is that folks will carry multiple streaming services, and they will. Ultimately, there will be a downturn in the economy, and people will cut costs.
When that happens, many of these folks will desire the Disney bundle, will have relationships with Apple and Amazon that keep them as part of those ecosystems, and some will prefer the HBO or the Comcast offering, because that's where their shows went. The environment for a firm that must raise money to keep producing more and more of its own content will run the business at a lower margin than those with more content that charge less because advertising is part of their plan. Not today, because the air is already out of the balloon, but Netflix will soon once again be one of my best short ideas. 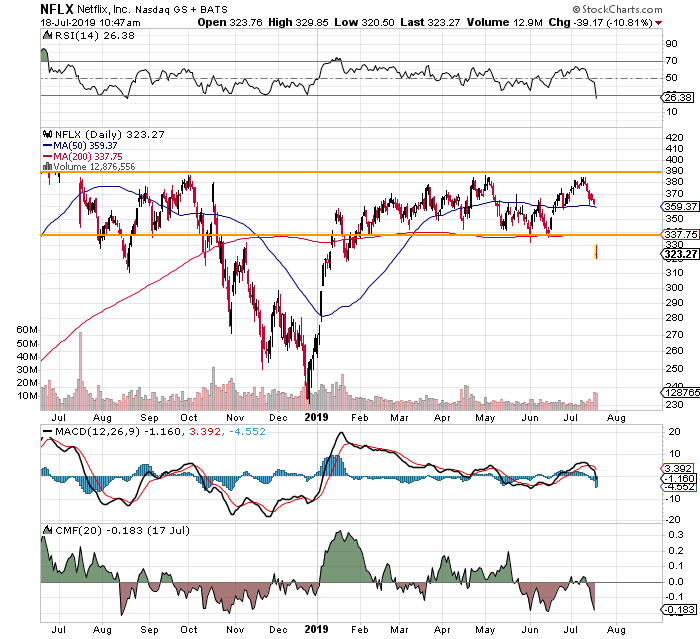 I would expect resistance on any rebound to start showing up at the 200-day simple moving average ($337), which also happens to be the lower bound of the basing that developed after the early January recovery for the name. This is where I would like make a sale. Remember, while we always move in and out of positions incrementally, with short positions I am far less aggressive than with longs. I would say that if one were eventually able to make that sale, that the 50-day line would make for a panic point, while prices below $300 could make for a realistic target.
Com