By STEPHEN GUILFOYLE Jan 06, 2020 | 12:29 PM EST
Stocks quotes in this article: NFLX, DIS, AAPL, AMZN, T, CMCSA, VIAC, SNE
As a consumer, I like Netflix ( NFLX) , but I must admit that when I watch streaming entertainment, which is not that often, Netflix is not my "go to." That would probably be Disney's ( DIS) ESPN+. Even for scripted entertainment, the shows I like at Netflix have dwindled. I find myself at Hulu -- again, a Disney service -- more often than Netflix. No -- I am not currently long on Walt Disney Company, though that firm, along with Apple ( AAPL) , Amazon ( AMZN) , AT&T ( T) , Comcast ( CMCSA) , and ViacomCBS ( VIAC) among others are all integral to future performance at Netflix.
All of these firms either compete for the streaming entertainment dollar, or soon will. That has already -- and likely will further squeeze -- margin going forward. Many of these firms operate a myriad of businesses and are cash flow beasts. This allows these firms to subsidize a growing business at a loss that really is still in the early innings to come out the other side. Not Netflix. This is what they do. Many of these competitors come with large libraries of existing content. Not Netflix. Oh, they are building a nice library of content, but must borrow to do so, and through no fault of their own, just do not have access to decades of legacy content.
Basically, even more so than the competition, Netflix must grow to stay competitive and -- despite price increases that have proven somewhat successful in recent years -- that ship has now sailed. The question is just how large is the pie going forward. The size of the addressable market, I don't think will contract, as the rest of the planet gains access to the internet and as traditional cable television, though still lucrative, declines in popularity.

The Good, the Bad, the Golden Globes

First off, the 2020 Golden Globe Awards apparently took place Sunday night. If that's your cup of tea, terrific, but I haven't watched an awards show since I was a wee lad knee high to a grasshopper, and if you happened to get famous after the 1980s -- unless you're an economist of a baseball player -- I have probably never heard of you.
Back to these awards that have made the news cycle on Monday: Netflix was able to boast 17 nominations, the most of any single studio, but only brought home two trophies. That's less than the six awards won by either HBO, or Warner Brothers, both properties of AT&T ( T) . Disney and Sony ( SNE) , and ViacomCBS also came home with more hardware than did Netflix. Amazon ( AMZN) Prime brought home just as many -- two. Despite landing four films in two different categories for "Best Picture," Netflix landed neither award.
The awards show, which is both and good and bad for Netflix, caps a month or so of ups and downs for the firm that generally saw the stock rise in value throughout. The firm has experienced both impressive growth in global subscriptions, and lagging domestic results in the U.S. This resulted in a downgrade in mid-December from Needham, as well as eye-popping success in growing the Asia-Pacific market.
Netflix lost its second-most streamed television show (according to 2018 data) at year's end when AT&T brought "Friends" home for the expected launch of HBO Max late this spring. Then, on Friday, according to a report from SimilarWeb, daily active users of the Netflix app among Android users dropped 5.8% domestically, and 3.1% internationally, in just the fourth quarter, as the impact of Disney+ and Apple TV+ competed for viewers.

The Numbers to Roll in Soon

Netflix will report the firm's fourth quarter financials in about two weeks. Consensus is for earnings per share of 52 cents, comparable to 30 cents for fourth quarter 2018, on revenue of $5.45 billion vs. $4.19 billion a year ago. These numbers, if realized look awesome. Still the stock trades at 59-times forward looking earnings. Operating margin has been solid at 18.7%, but as I said, I would think this comes under increased pressure. As of the end of the third quarter, the firm ran with a cash position of $4.44 billion, and total debt of more than $13.5 billion. Operating Cash Flow remains a negative. The firm's Current Ratio comes in at an anemic 0.73, and the Quick Ratio at 0.68. We really don't like to see these ratios print below 1.00. 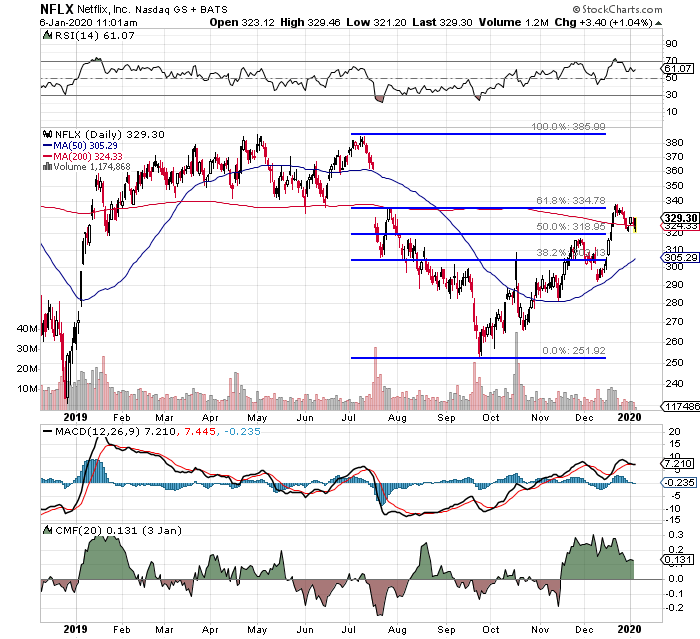 As readers will see, Money Flow, and Relative Strength both look good. But the daily Moving Average Convergence Divergence has turned gnarly, as the shares ran into a buzz saw at the 61.8% Fibonacci retracement level of the July through September sell-off. These shares also seem to be struggling with deciding which side of the 200-day simple moving average, now $324, they want to live on. Early this morning, that line has offered support.
I stand by what I told Katherine Ross in our interview at TheStreet last week. At this level, this is a tough name to choose a side on. I would rather just not trade the equity, and either play a direction, or simply volatility in the name through the options market.

Bear Put Spread
- Purchase one NFLX Jan. 24 $330 put for roughly $15.45.
- Sell (write) one NFLX Jan. 24 $320 put for roughly $10.70.
Net Debit: $4.75
Best case: NFLX trades below $320 at expiration, the trader wins back $1,000, a profit of $525.
Worst case: NFLX trades above $330 at expiration, the traders loses the whole $475.
Note: For bullish traders, this strategy would work as a bull-call spread the same way.
(DIS, AAPL, AMZN, VIAC and CMSA are holdings in Jim Cramer's Action Alerts PLUS member club. Want to be alerted before Jim Cramer buys or sells them? Learn more now.)
Get an email alert each time I write an article for Real Money. Click the "+Follow" next to my byline to this article.
TAGS: Entertainment | Investing | Stocks | Digital Entertainment | Stock of the Day | Earnings Preview