Netflix (NFLX)  is set to report second-quarter financial results Tuesday, after the closing bell. For several days now, ahead of that release, the firm has been busy releasing a literal blizzard of news that has moved the stock significantly.

It started earlier this week, when Netflix reportedly landed a multiyear agreement to the exclusive rights to stream animated films from Camcasts's (CMCSA)  Universal Filmed Entertainment Group. Supposedly, Netflix has been working on streaming live events, as well, including an upcoming "Bridgerton" ball this fall. Apparently, "Bridgerton" is a popular Netflix show. I wouldn't know.

The next day came news that Netflix is planning to make a run at streaming video games on the service, and hired former Zynga (ZNGA)  CEO Mike Verdu to head the effort. In addition to his work at Zynga, Verdu is a veteran of Electronic Arts (EA) , where he worked on tiles in the "Sims," "Plants vs. Zombies," and "Star Wars" series. Verdu also worked as a vice president working with developers in bringing content to Facebook's (FB)  Oculus virtual reality product.

The idea here is to offer video games within a calendar year concurrent with and alongside the firm's current entertainment choices on the same platform. The idea more broadly is to drive growth. Plain and simple. The firm has beaten revenue estimates for six consecutive quarters, but has missed consensus projections for earnings per share (profitability) for four of the past five, while for the most recent quarter, adding considerably fewer subscribers than the street was looking for.

A Long Story With New Characters

While Netflix remains well ahead of the competition in terms of market-share, only a couple of years back, there was hardly any competition at all, and relatively speaking. Netflix is more expensive for consumers than the competition. Netflix competes with the Walt Disney Company (DIS) , AT&T (T) , Amazon (AMZN) , Comcast, ViacomCBS (VIAC) , Apple (AAPL)  and a host of others for streaming eyeballs. All as with the grace of a merciful God and a little bit of luck... the "stay at home" economy of the pandemic morphs back into the "experiential" economy. Gaming would differentiate Netflix from all of the above with the exception of Apple. The others, however not to be outdone, all offer live sports.

Just a reality check. By entering the realm of gaming, Netflix also must compete with an entirely different set of players, and more of them are going to fight for their turf. Netflix will have to carve space out of an industry dominated by Microsoft (MSFT) , Sony (SNE) , Activision Blizzard (ATVI) , the already mentioned EA, Take-Two Interactive (TTWO)  and others. In fact, Ross Gerber, co-founder and CEO of Gerber Kawasaki Wealth & Investment Management tweeted earlier today that such a foray might prove unsuccessful without an acquisition. Good Point.

What do Disney, Amazon, Apple, AT&T, ViacomCBS and Comcast all have in common? Strong cash flow positive businesses that can subsidize their streaming entertainment operations for as long as possible. That is something that Netflix does not have. Same for Microsoft and Sony when it comes to defending their gaming empires. This may be doable, but to be honest, in my home, there are four of us. Only one even watches Netflix, ever. Everyone else in the house watches Disney+, Hulu, and Amazon Prime.

Thirty-four sell-side analysts follow Netflix. Expectations for EPS are running at $3.15 with a range of $3.01 to $3.27. For the one-year-ago period, NFLX posted EPS of $1.59, so the earnings growth is obvious. As for revenue generation, Wall Street is looking for $7.32 billion, which would be up 20% year-over-year, and that would be a deceleration and the slowest pace of growth in memory. In fact for the year, Wall Street sees revenue growth of less than 19% and just barely more than 15% for next year (2022). Hence, why Netflix is getting aggressive.

Don't misunderstand me. The company is not in trouble. At last check, Netflix had 208 million subscribers. The shares currently trade at 52-times forward looking earnings, and have always been valued as a growth stock. But "growth" stocks grow sales faster than 15% to 20% a year. That would mean that Netflix could eventually be assigned a valuation more in line with the S&P 500 (21 times), or the broader tech sector (27 times).

For the stock to continue higher after Tuesday (especially after this run), the firm is going to have to post impressive subscription growth numbers both at home in the US and abroad. The firm has also maintained an intention to go cash flow positive in 2021, and that probably makes the idea of an acquisition unlikely.

The Good, the Bad & the Ugly

You're not going to believe this. Three sell-side analysts have opined on NFLX on Thursday morning. All three are rated at five stars by TipRanks. One, Eric Sheridan of UBS, reiterated his "buy" rating on NFLX and increased his price target to $620 from $600. Sheridan is looking for 1.9 million net adds to the roles of subscribers. Remember, the firm had guided to one million net adds back in April after slightly less than 4 million was seen as a disappointment for the first quarter.

Two, Rosenblatt's Mark Zgutowicz maintained his "hold" rating without venturing a target price. Can that be considered covering a name? Why maintain a "hold"? Three, Wedbush's Michael Pachter sees the firm at close to saturation levels in the U.S., and casts doubt on the firm's ability to get cash flow positive this year, unless it cuts back on spending on new content. Pachter reiterated his "underperform" rating and his price target of $342, which would be a 37% haircut.

Readers should see a few things here. The stock has been mired in a basing pattern spanning a rough $100 for more than a year now. Everytime, the stock's RSI (relative strength) hits 70, or gets close, the stock sells off. There are four gaps visible on this chart, the last two are yet to fill. I know, I know, gaps don't always fill,  but you and I both know.. they almost always do. That means that should Tuesday not turn out so hot for NFLX, there is a magnet in the $520 to $525 range created back in late June, and the more ominous gap created back on April 21st with a low end of just $503. 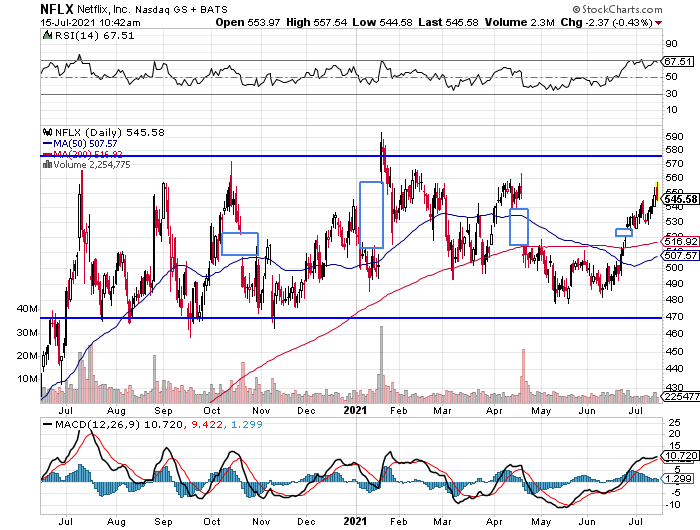 Every time I get negative on Netflix, I short the stock, and then work my tail off for a month making the position work. I think I can probably turn anything into a winner if my life depended on it, but why risk going through all that again. I am thinking a simple bear put spread is the way to go here. Let's have a look.

(FB, AMZN, AAPL and MSFT are holdings in Jim Cramer's Action Alerts PLUS member club. Want to be alerted before Jim Cramer buys or sells these stocks? Learn more now.)

Get an email alert each time I write an article for Real Money. Click the "+Follow" next to my byline to this article.
TAGS: Investing | Stocks | Digital Entertainment | Earnings Preview

I Certainty Wouldn't Invest in Target Right Now, But I Would Trade It

I really am stunned by the hits to the quality of the balance sheet that both Target and Walmart have suffered.