As August begins, a seasonally weak period for the markets, the charts of the major equity indices are a mix of bullish, neutral and bearish near-term trends.

Let's take a close look at the charts and data. 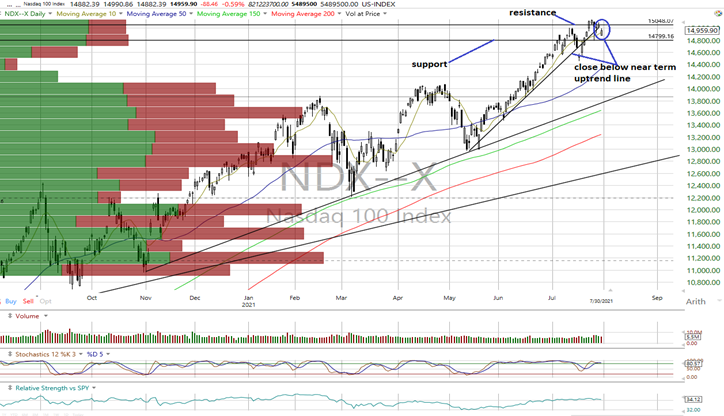 The only technical events of importance were the Nasdaq 100 (see above) closing below its near-term uptrend line, shifting its trend to neutral from positive. Also, the Value Line Arithmetic Index closed below its 50-day moving average but remains in an uptrend.

No violations of support were generated, leaving the Nasdaq Composite, MidCap 400 and Value Line index in uptrends with the S&P 500, DJIA, Nasdaq 100 and Russell 2000 neutral and the Dow Jones Transports negative.

Cumulative market breadth was unchanged with the NYSE A/D positive and the All Exchange and Nasdaq neutral.

While the Rydex Ratio (contrarian indicator), measuring the action of the leveraged ETF traders, moved deeper into cautionary territory at 1.45, the Open Insider Buy/Sell Ratio rose to 50.8 as insiders continued their buying activity that has seen a notable change of heart on their part of late as they had been largely absent over the prior several weeks. We continue to see their recent action as a positive.

Last week's contrarian AAII bear/bull ratio (27.3/35.67) and Investors Intelligence Bear/Bull Ratio at 16.7/53.1 (contrary indicator) improved, both seeing a drop in bulls and rise in in bears as the crowd became more fearful. Their new data will be released Tuesday.

We are maintaining our current "neutral/positive" macro-outlook for equities.
Get an email alert each time I write an article for Real Money. Click the "+Follow" next to my byline to this article.
TAGS: Indexes | Investing | Markets | Stocks | Technical Analysis | Treasury Bonds | U.S. Equity