By STEPHEN GUILFOYLE Oct 12, 2021 | 11:00 AM EDT
Stocks quotes in this article: HD, WMT, COST, TGT, MATX
How do we proceed?
We Understand, we Identify, we Adapt, we Overcome, and we Maintain. Ever hear of SMEAC? Situation, Mission, Execution, Administration & Logistics, Command & Signal? The first is the investor/trader version of the standard military five-paragraph order. This is how we organize. It's how we lay the basis for a thoughtful, well-developed outcome.
What does every trader/investor need to have in place for every position? Every position, every time? That's right. Price targets and panic points. You can have more than one price target (up 20% to 25%), you can have more than one panic point (down 7% to 8%).
These spots are adjustable, but not on a whim. I'd like you to have a pivot point produced by a technical pattern that the trader understands, but I do get that that is not always possible.
These levels produce discipline. Discipline drives performance. Relax. You're at ease.

Just Monday, in your daily Market Recon column, we covered the overwhelming demand for Pacific Ocean-focused maritime transport. We mentioned the fact that Home Depot ( HD) , Walmart ( WMT) , Costco ( COST) and Target ( TGT) had taken to chartering their own fleets of smaller cargo ships in order to avoid competing for space aboard the larger carriers and at overused ports on the West Coast of the United States. These retailers are adapting to a changed environment.
Going back two weeks, on Sept. 30, I appeared on "The Claman Countdown" at Fox Business. Cheryl Casone was in for Liz Claman. I was asked what I was buying going into the quarter's end. I mentioned that I had just bought Matson Inc. ( MATX) , among a few other names. I mentioned the need for investors to have exposure to Pacific Ocean-focused maritime transport. I was adapting to a changed environment.
Frightened by headline-level inflation? Increased exposure to energy-focused commodities and energy sector stocks would appear to be the hedge. Rising costs associated with constrained trade routes between the U.S. and China? I think it makes sense to own a piece of whomever is driving, or parking those big ships off of the port of Los Angeles as well as everywhere else.
Matson is set to report its third-quarter results on Nov. 3. On Monday night, Matson warned. To the upside.

Matson disclosed late Monday that increased demand for shipping services is leading to far greater profits in the quarter than had been projected.
The company now expects third-quarter operating profit for its Ocean Transportation division to land in between $358M and $363M. Consensus (only two analysts cover MATX) had been for operating profit of $269M for the entire company. Matson now projects net income of $277.3M to $285.5M, or earnings of $6.39 to $6.58 per share. Expectations were for EPS of $4.39.
To try to alleviate the pressure, Matson added a second shipping route from China to Southern California in May 2020, and this year, a third route, this time to Northern California. Holiday season bottleneck? Not so fast. Literally, not so fast.
Matson CEO Matt Cox said, "Currently, supply-chain congestion continues in the Transpacific trade lane, with the combination of inventory restocking, peak season and ongoing elevated consumption trends. We expect these conditions to remain largely in place at least through mid-year 2022."
Cox also said "Continued strong demand for the China service was the primary driver of the increase in consolidated operating income year over year."

Matson has an improving, but still not very solid balance sheet, in my opinion. Current liabilities run larger than current assets. Total assets, supported by property and equipment, are still quite a bit larger than total liabilities minus equity.
There has been an effort made to reduce long-term debt, and get rid of pension obligations. That said, at last check, despite recently positive cash flows, the company's current and quick ratios are, in my view, awful.
What am I saying? I am telling you that this is a trade made in response to market conditions and not a long-term investment. 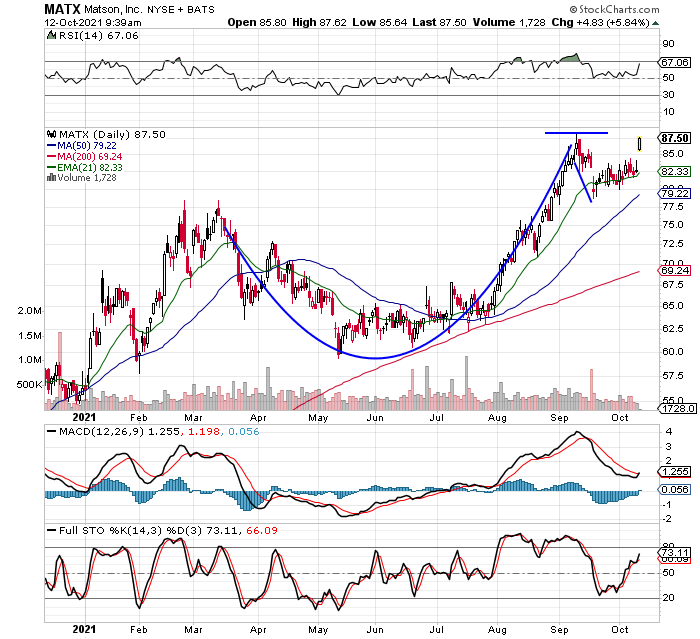 MATX is trying to break out of an $88 pivot created by a six-month cup that produced a handle and one month recovery. The 21-day exponential moving average (EMA) has guided the stock as it came away from said handle.
The daily Moving Average Convergence Divergence (MACD) is set up well. Both the Relative Strength Index (RSI) and Full Stochastics Oscillator (FSO) are trending positively, without being textbook overbought. The short-term negative would be the newly created gap.