As the major equity indexes continue to make new closing highs and remain in uptrends, keep your eyes on the Nasdaq indexes.

As discussed below, both the Nasdaq Composite and Nasdaq 100 have reached their "return lines" that have presaged some digestion of gains four times since the March lows of this year. In our view, they suggest some tempering of enthusiasm may be appropriate for the near-term. 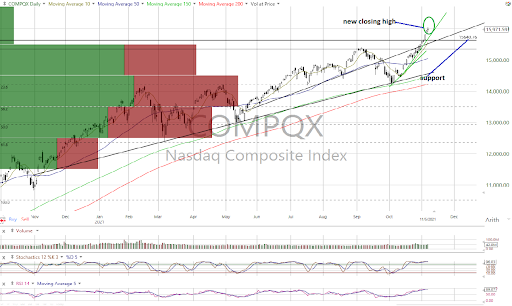 The major equity indexes closed higher Friday with positive internals on both the NYSE and Nasdaq.

Only the Dow Jones Transports was unable to post a new closing high.

All the indexes remain in near-term uptrends.

However, a closer look at the Nasadaq Composite (see above) and Nasdaq 100 (see below) shows both having reached their "return lines" that, since March, have been followed by periods of digestion of gains as noted on the Nasdaq 100 chart. In our opinion, the fact that said return lines have been consistent pullback levels over the past several months suggests some better buying opportunities may lie ahead as tests of uptrend lines may be forthcoming.

Cumulative market breadth remains positive on the All Exchange, NYSE and Nasdaq.

No stochastic signals were generated as of the close on Friday. 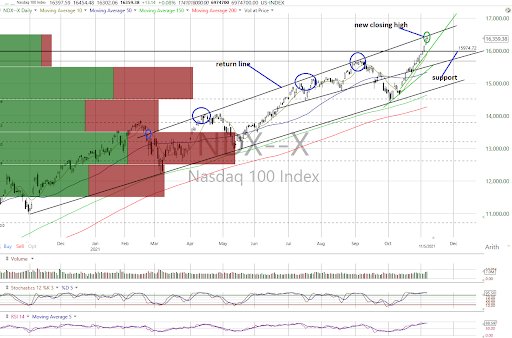 The data find the McClellan 1-Day Overbought/Oversold still in overbought territory for the Nasdaq only as the others remain neutral (All Exchange: +49.82 NYSE: +49.11 Nasdaq: +52.09).

The detrended Rydex Ratio (contrarian indicator), measuring the action of the leveraged ETF traders, dipped to 1.16 but remains in bearish territory as they continue their leveraged long exposure.

The Open Insider Buy/Sell Ratio dipped to 35.7 as insiders did a bit of selling but remains neutral.

We remain "neutral" in our near-term macro-outlook for equities as the Nasdaq Composite and Nasdaq 100 charts suggest some retracement of recent gains is becoming more likely post the recent rally.