Nasdaq and the growth stocks finally played catch-up and rallied. And they did it on a day bonds were down and rates were up. And while we're at it, bonds were down, rates up, and banks didn't rally.

Some correlations don't last forever. Or, maybe, it was simply the end of the quarter.

For the first time in more than a week, I forgot to write the same line I have written here almost every single day, and my inbox was full. So let me apologize for not saying that I still expect us to rally into early April and I still expect it will be more in fits and starts than it will be straight up, the way it was at the two prior lows this year.

Let's start with Wednesday's statistics, because they weren't very good. Breadth put in another poor showing. In fact Tuesday saw the S&P down 12, with net breadth on the New York Stock Exchange at positive 830 issues. Wednesday saw the S&P add 14 points with net breadth at positive 300. You do not need to be a math wiz to know that is not inspiring.

At the two prior oversold lows this year, the breadth was the leader. Now we have the S&P at a new high and breadth lagging.

If we look at volume, the picture is even grimmer. The upside volume on the New York Stock Exchange on Tuesday was 66%. Wednesday, it was 46%. That's right, there was more volume in down stocks than up stocks on Wednesday. Perhaps it was the quarter end, but that would be rationalizing some poor statistics.

Needless to say, we have the S&P at a new high and the McClellan Summation Index still heading down. It needs a net differential of positive 500 advancers minus decliners just to halt the decline and more to turn it upward.

A few weeks ago the number of stocks making new highs on the NYSE was more than 500. Wednesday's new high in the S&P brought us 188 new highs.

But what about Nasdaq? Surely Naz was better. Well, Tuesday saw Nasdaq lose 14 points on the day and up volume was 67% of the total. Wednesday saw a rise of just over 200 points and up volume was 65%. You do not need to be a mathematician to know 65 is less than 67. Maybe it was the quarter end, but for now I take it as proof the rally is different than the prior two.

On the sentiment front, at least, the Investors Intelligence bulls slipped back to 54%. But the bears slipped a point as well and they are now at 17.5%. 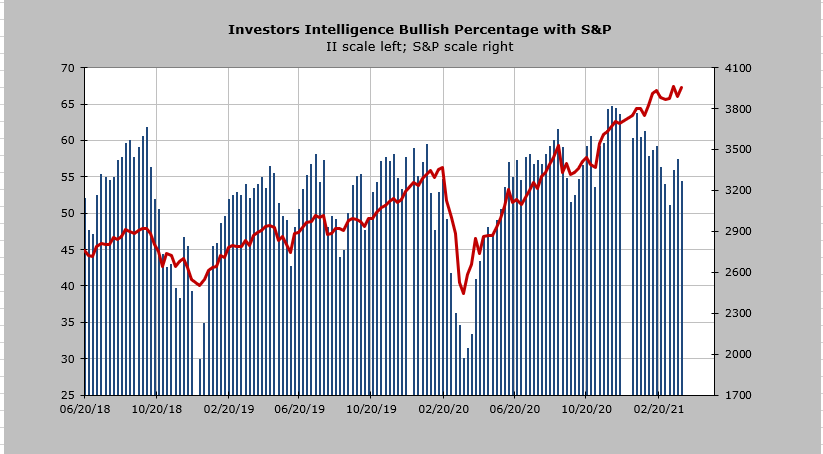 Finally there is the Daily Sentiment Index (DSI) for the Volatility Index, which is unmoved at 13. I do think this will become a problem for stocks if it slips to single digits. It's another reason I think this rally is different than the prior two.

I would not be surprised to see hesitation on Thursday, as folks square up before Friday's day off in stocks, bonds open and an employment number release. I don't yet have a spot for when we will be overbought again. But you will see that Wednesday's rally barely registered on the Oscillator. That's what happens when breadth lags.