Tuesday's mixed market action for the major equity indices resulted in one new closing high while two others saw their short-term trends turn negative as cumulative breadth saw some weakness as well.

With that said, the fact that the OTC indexes saw strong buying near the close that lifted them to the mid-points of their intraday ranges inclines us to believe the weak action may prove to be a correction as opposed to a more dire outlook. 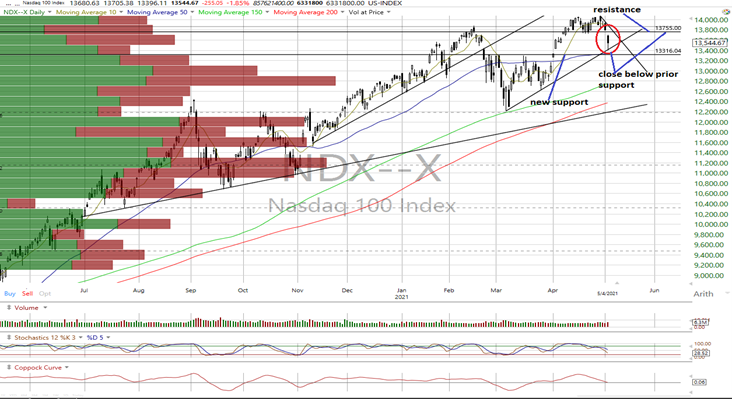 The DJIA and Dow Jones Transports closed higher with the Transports posting another new closing high.

The S&P 500 closed below support and its near-term uptrend line and is now neutral.

So, the DJIA and Dow Transports are positive, the Nasdaq Composite and Nasdaq 100 negative with the rest neutral.

Cumulative breadth weakened with the advance/decline lines for the All Exchange and Nasdaq negative with the NYSE's positive.

Sentiment indicators were little changed and remain at cautionary levels. The Rydex Ratio (contrarian indicator) measuring the action of the leveraged ETF traders is still in bearish territory at 1.4.

This week's Investors Intelligence Bear/Bull Ratio (contrary indicator) saw a drop in bullish sentiment at 16.5/59.2 as did the AAII bear/bull ratio at 23.6/49.7. However, both of those sentiment contrarian indicators remain in bearish territory.

The Open Insider Buy/Sell Ratio remains neutral at 26.7 as insiders have slightly decreased their buying activity.

Valuation still appears extended with the forward 12-month consensus earnings estimate for the S&P 500 from Bloomberg rising to $188.29 per share. This leaves the S&P's forward P/E multiple at 22.1x, its lowest reading in several weeks, while the "rule of 20" finds fair value at 18.4x. The valuation spread has been consistently wide over the past several months while the forward estimates have risen rather consistently.

Tuesday's action, while volatile, was not sufficient to alter our near-term "neutral/positive" macro-outlook for equities.