Several of the major equity indices are seeing further technical improvement while market breadth remains positive. Despite Wednesday's sizable gains, the one-day McClellan Overbought/Oversold Oscillators remain neutral, as does the bulk of the data dashboard.

Let's take a deep dive into the charts and data. 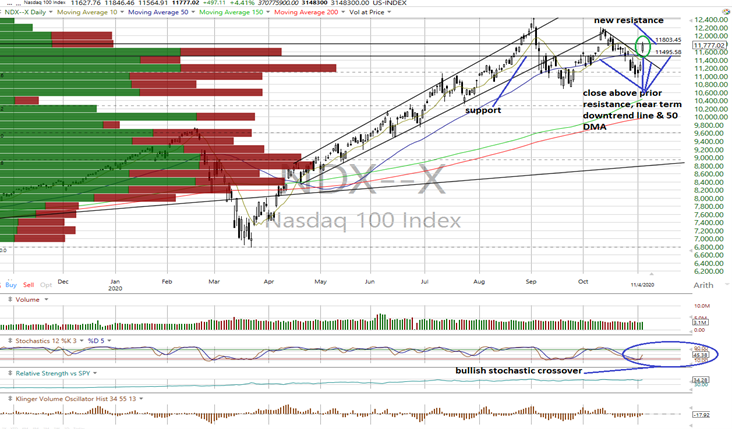 The bulk of the equity indices closed higher Thursday with positive breadth on the NYSE and Nasdaq although the NYSE saw negative up/down volume.

The only two posting declines were the Dow Jones Transports, which closed below its 50-day moving average and the Value Line Arithmetic Index.

However, positive events occurred on the Nasdaq Composite and Nasdaq 100 (see above), both of which closed above resistance, their 50 DMAs, near-term downtrend lines while generating bullish stochastic crossover signals and are now in neutral near-term trends.

The S&P 500 closed above resistance, its 50 DMA and near-term downtrend line and is now neutral.

The DJIA closed above resistance but remains in a near-term downtrend.

So, all the charts are now neutral except the DJIA and Dow Transports, which remain near-term negative.

Breadth remains positive with the All Exchange, NYSE and Nasdaq cumulative advance/decline lines positive and above their 5DMAs.

Surprisingly, the one-day McClellan Overbought/Oversold Oscillators remain neutral despite Wednesday's strength (All Exchange: +14.96 NYSE: +17.58 Nasdaq: +13.32) and have yet to reach overbought levels.

The Open Insider Buy/Sell Ratio dipped to 62.2. That is the first dip in that data point over the past several sessions as insiders have done more buying than selling.

The Rydex Ratio, (contrarian indicator) is unchanged at a neutral 0.59 as the leveraged ETF traders have recently lightened up on their leveraged long exposure.

The valuation gap is back to overvalued levels with the S&P 500 trading at a P/E multiple of 21.8x consensus forward 12-month earnings estimates from Bloomberg of $157.63 per share, while the "rule of 20" finds fair value at 19.2x. Forward estimates have been moving north over the past few months rather consistently.

For the reasons stated above, we are maintaining our near-term outlook for the equity markets at "neutral/positive."

A Day for Resets

I'm more inclined to do strategic buying in this sort of market action rather than more aggressive selling.