Two of the major equity indices made new closing highs Tuesday while another violated resistance on a closing basis, leaving all but the Russell 2000 in near-term uptrends.

Even with the sentiment data shift to a more cautionary tone, the charts have yet to generate sell signals while the McClellan OB/OS are not what we would consider "threatening." 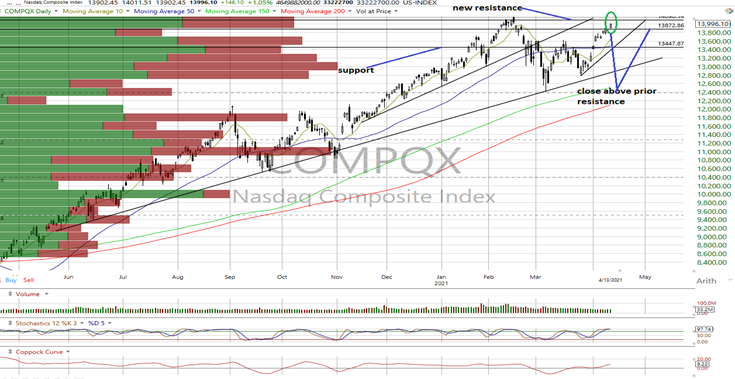 The S&P 500, Nasdaq Composite and Nasdaq 100 closed higher Tuesday as the rest of the major indices declined.

Internals were negative on the NYSE and mixed on the Nasdaq.

The S&P 500 and Nasdaq 100 posted new all-time closing highs while the Nasdaq Composite (see above) managed to close above near-term resistance.

All the indices remain in near-term uptrends and lacking sell signals except for the Russell 2000 remaining neutral.

Cumulative market breadth remains positive on the All Exchange and NYSE. However, the Nasdaq cumulative A/D is still in a short-term downtrend and below its 50-day moving average.

Stochastic levels remain overbought on all the charts but have as yet to generate bearish crossover signals.

As such, we believe the chart trends should continue to be respected until proven otherwise.

The data remain generally neutral, although the sentiment indicators have turned a bit more cautionary.

Looking at sentiment, the Rydex Ratio (contrarian indicator), measuring the action of the leveraged ETF traders, moved deeper in bearish territory to 1.36 as the traders extended their leveraged long exposure.

This week's Investors Intelligence Bear/Bull Ratio (contrary indicator) was unchanged at a bearish 17.5/54.4 with the AAII a bearish 21.4/52.2 as bullish sentiment increased.

Of note, the Open Insider Buy/Sell Ratio turned bearish, dropping to 18.1 as insiders have recently stepped up their selling activity.

Valuation still appears extended with the forward 12-month consensus earnings estimate for the S&P 500 from Bloomberg rising to $181.93 per share. This leaves the S&P's forward P/E multiple at 22.8x while the "rule of 20" finds fair value at 18.4x. We reiterate the valuation spread has been consistently wide over the past several months while the forward estimates have risen rather consistently.

The 10-year Treasury yield has dipped to 1.62% and closed below its short-term uptrend line. This may imply a pause in the recent rise in the 10-year's yield. Resistance is 1.75% with support at 1.55%.

For reasons stated above, we are maintaining our near-term "neutral/positive" macro-outlook for equities.