Over recent days, New York, or at least my neck of the woods in New York, finally ran into winter. After what had been a rather mild autumn to date, temperatures measured in Fahrenheit dropped into the mid-20s with wind chills threatening to move into the teens. I know some readers will laugh at this out in the northern Midwest, but off in New York City's eastern suburbs, surrounded by salt air as we are, this is cold. I even managed to slip (not fall) on some ice on my first walk of the morning on Thursday because like a 21st century dunce I was looking at my smartphone. How I used to mock the corporate zombies who all slowed to check their phones as they climbed the stairs out of the subway. Those were the days, my friend. I thought they'd never end...

The sun did come out on Thursday, and after a little while it did warm the soul. Temps are now up in the 40s at zero dark-thirty Friday morning, and probably heading into the high 50s. Certainly thoughts of baseball and maskless days at the beach will enter my mind as the sun rises and then matures into something we on planet Earth call "afternoon." Equity markets enjoyed the sunshine on Thursday, after a couple shaky (at least at the headline level) days. Truth be told, equity markets have moved sideways on decent breadth now for two weeks, at least since finding satisfaction in the outcome of the election. Even though the presidential race is now in the courts and the Senate remains in doubt. I do not think that what we see at this time will likely change when it comes to the outcomes of the election, though investors do need to be cognizant that this is a lurking risk, and perhaps that is why markets have stayed put as they have.

On Thursday, the sun most certainly did shine more brightly on one side of the street than the other. While the S&P 500 and Dow Jones Industrials did manage to close green for the day, neither did so very impressively. It becomes more obvious almost every day; on Thursday, it was the rising weekly Initial Jobless Claims that gave cause for consternation. The reopening trade separated. The Dow Transports essentially closed unchanged while small to mid-caps still managed to add onto weekly gains.

This all took place while investors shaken by the apparently relentless spread of the SARS-CoV-2 virus and its impact on regional policy as well as human interaction moved back into Tech stocks and Internet names. The Nasdaq Composite and Nasdaq 100 enjoyed the most support across the large-cap space as the "rotation," as Wall Street has called it, or the "broadening" as I have referred to it here, moved in the other direction. Nothing really traded lower, so again, we really cannot call what we saw on Thursday an unwind of a rotation that never really took place. With certainty, we can say that there was a broadening of the rally over the first half of November and at least some kind of narrowing of that condition over the past 24 hours.

Take note that downtown, at the friendly confines of 11 Wall Street, winners beat losers by less than two to one while advancing volume beat declining volume by just better than two to one. However, aggregate trading volume in New York Stock Exchange (NYSE) listed names declined significantly on Thursday from Wednesday, and that does take some shine off of any positive takeaway. Now, we hop on the "2" train and head up to Times Square. We walk the two blocks up to "Father Duffy" Square, which is a small section of the larger, more famous "Square," to pay our respects to the "Fighting Chaplain" and head on into the Nasdaq Market Site.

At the Nasdaq, winners did beat losers by almost five to two while advancing volume obliterated declining volume by a rough six to one on significantly rising aggregate trading volume from the day prior. This lends credence to the idea of a shift back into what has worked during the pandemic economy by professional managers despite some apparent signs of distribution earlier this week.

Equity index futures markets had quite the ride overnight. Though a serious sell-off has abated as the hours have passed, I still need to wonder just what the heck is going on. Maybe it's me. Maybe I just don't get it.

On the one hand, from a statistical point of view, the world looks a little scarier. The virus spreads. Record Covid-related hospitalizations. The numbers of those now filing for state unemployment benefits on the rise. Seems like the perfect time for the Senate to go into recess. Seems like the perfect time for the U.S. Treasury to allow the majority of the emergency lending programs born of the CARES Act and collaborated on with the Federal Reserve Bank to expire and ask for a return of thus-far unused funds.

Among the programs permitted to expire will be the Municipal Liquidity Facility, the Main Street Lending Program, and the Term Asset-Backed Securities Loan Facility. At least several programs, such as the Paycheck Protection Program Liquidity Facility (PPP), the Primary Dealer Credit Facility, the Money-Market Mutual Fund Liquidity Facility and the Commercial Paper Funding Facility, will be extended for another 90 days beyond year's end, so this is not a complete abandonment, but it is easy to see these moves as somewhat hostile unless there is something that we just don't know yet. That's the road that I think we must choose at this time, as Secretary Steven Mnuchin and Federal Reserve Chairman Jerome Powell have appeared in the past to work very well together.

Without allowing for some other shoe to drop, it would be difficult to understand the motive. Is the Treasury trying to force the legislature into more serious negotiation over fiscal policy? Is the Treasury trying to provoke the Fed into more aggressive action regarding its asset purchasing programs? I find it hard to believe two things that are bouncing around talk radio early this morning.

One, that this Treasury would be trying to burn down the economy ahead of a transition in power at the executive level. That, hopefully, would be absurd. Why would Secretary Mnuchin damage his own reputation like that when most folks from both sides of the aisle see him as having done a very good job at a time of crisis. Surely, the secretary would be quite aware that the economy is headed into a season of mitigation and that the time to take off the training wheels is not yet upon us. I must... no, I choose to believe that Secretary Mnuchin knows something or is trying to force something that has not yet come to light. Otherwise, this is clearly an economic as well as a market negative that is not even close to having been priced in.

News broke Thursday night that Pfizer (PFE) on Friday intends to file with the Food and Drug Administration (FDA) an application for emergency use of its Covid-19 vaccine candidate. Meanwhile, Moderna (MRNA) is thought to be just days behind. I don't know how many of you watched the "Task Force" press conference on Thursday evening, but I did. Secretary of Health and Human Services Alex Azar indicated that between these two vaccines there should be a rough 40 million doses, or enough to immunize 20 million people available by year's end. Oh, and just an add on: How impressive is this General Perna, the U.S. Army logistics expert on this task force? Wow. Certainly seems like the right guy for a difficult and complex mission.

On that note, Bloomberg is reporting that these two candidates could also receive conditional approval in the European Union by the second half of December. The EU appears ready to spend the equivalent of $10 billion to purchase hundreds of millions of doses after already pre-ordering up to 1.2 billion doses from a number of vaccine manufacturers that also includes AstraZeneca (AZN) , Sanofi (SNY) , GlaxoSmithKline (GSK) and Johnson & Johnson (JNJ) .

You may have noticed earlier this week that Carnival Corp. (CCL) canceled a number of planned cruises globally out into March 2021. Then, late Thursday, more news. Apparently Carnival will tap debt markets, seeking to borrow as much as $1.6 billion across North American and European markets in unsecured securities. Not backed by property, not backed by ships, not backed by any collateral at all. Starving? The firm, for capital? Sounds like it. No revenue for longer. Bond market investors for yield? Definitely.

You say you would not touch these bonds with a 10-foot pole. Be honest. You are in bond funds, probably several of them, and you have no idea what those who are managing these funds will do for yield. I don't know what you're in, but I am willing to bet that some of you would scoff at the idea of chasing unsecured corporate debt for yield while your dollars do just that. I, who scoffed at the idea myself, will be looking over my bond portfolios today, for I am among you.

We have two Sarge faves -- one longer term, Advanced Micro Devices (AMD) , and the other more medium term, Tesla (TSLA) -- working on breaking out from double-bottom patterns near the top of their respective charts. Let's take a look. 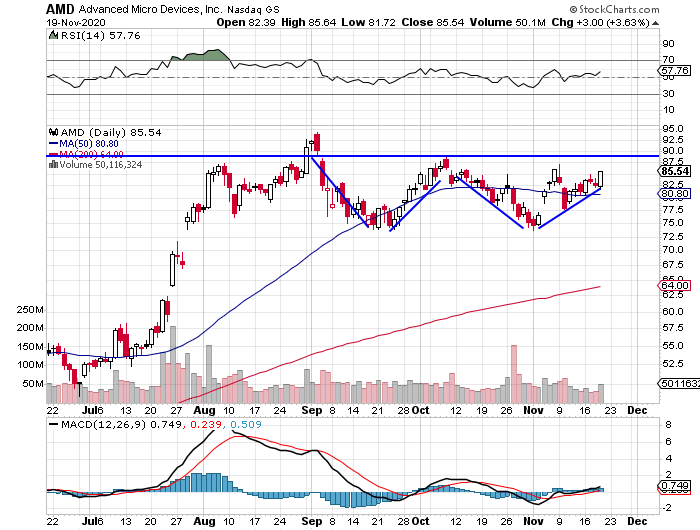 Advanced Micro Devices, which is a holding of Jim Cramer's Action Alerts PLUS charitable trust, has not yet broken out, but does appear to be approaching an $88 pivot point. Not there yet, but the pattern is clean. I don't see any fuzz around the edges that concerns me as of yet. Should AMD take and hold pivot, I see a target price that would need to be adjusted up to $105 while dragging the panic point up to $81 in the process. 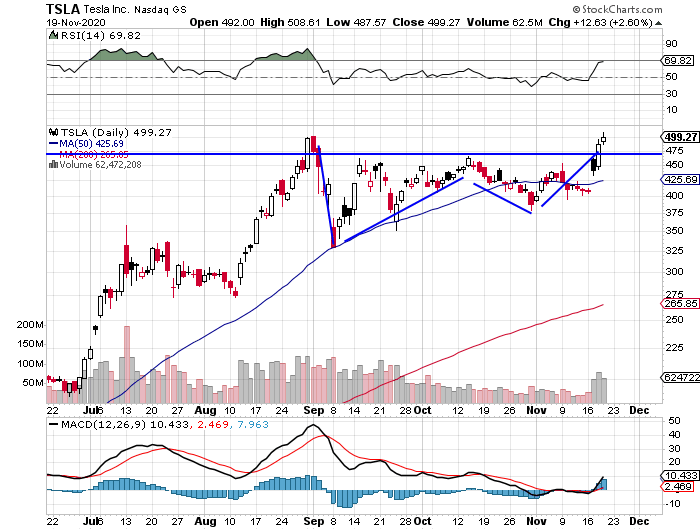 Tesla is trickier, because there really are three troughs visible since early September and this could present as an ascending triangle as well. As a double bottom, which is how I am seeing it right now, the breakout has already been triggered with the pivot taken at $466 and held. This would make my price target $559, and my panic point an even$430. The catch here would be that if this is an ascending triangle the pivot would be $502, which was pierced Thursday, but not held. Food for thought.