The news has been coming in at a furious pace. Covid-19 vaccine news, that is.

The headline that broke Tuesday night was heartbreaking, at least for me. The action taken is considered routine, and I understand that. AstraZeneca (AZN) had paused its late-stage clinical trials for what has been considered to be one of the leading Covid-19 vaccine candidates due to an unexplained illness in one of the trial participants in the U.K.

AstraZeneca has been collaborating with the University of Oxford on developing this recombinant viral vector vaccine, which is different from the vaccine under development at Moderna (MRNA) and the collaborative vaccine candidate that Pfizer (PFE) and BioNTech (BNTX) are developing. Those two candidates use messenger RNA technology. The AstraZeneca candidate uses a weakened version of a chimpanzee virus that encodes instructions for making proteins from this novel coronavirus to create immunity.

Is the pause a big deal? We don't know. Events like this are not uncommon in Phase Three testing.

The New York Times reported that the individual who became ill had received a diagnosis of transverse myelitis, an inflammatory disease impacting the spinal cord. It is unknown at this time if this diagnosis is related to the vaccine.

That hit home for me. You see, folks, the reason you have not seen me on television in while and the reason I have assumed a much lower public profile of late is because I became ill with Covid-19 last spring. March into April. Toughed it out at home, afraid to go to the ER. Pretty sure it was touch and go there in early to mid-April. That's when I finally sought medical help. I did not present with a cough, and my lungs were clean. Thus, I could not be tested at the time. Tests were in short supply. I had plenty of other symptoms that we now know are part of this virus.

It's September. I have not been well since late March. I am still working with a neurologist, a gastroenterologist and a urologist. I have also had to work with a cardiologist.

The thing I have had to deal with is referred to as Post-Covid Inflammatory Syndrome. The people afflicted are referred to as "long-haulers." Nobody knows how long it lasts.

The last thing we need is a reaction to a vaccine that creates something like this in people who have never been exposed to the virus in the first place. That's why this scares the heck out of me. This is also why I have harped on mask wearing and social distancing. Just because you don't die does not mean you get your life back.

I lost 44 pounds top to bottom. Lost almost all muscle mass. Have not run in months, though I am lucky. I can walk, and I do every day. I have been able to put nine pounds back on, but keeping it on is an intense effort.

Think Covid is another flu? The flu is a nice afternoon in the park compared to Covid. Use your head, folks.

AZN sold off here on Wednesday morning in European trading, but came off of the lows as trading moved across the Atlantic Ocean.

First off, Pfizer and BioNTech announced that preliminary results for the second of their two, or really four, candidates -- this one known as BNT162b2 -- showed efficacy in inducing neutralizing antibodies as well as viral antigen-specific CD4+ and CD8+ T cells in rhesus macaques. The candidate also generated B cell and T cell immune responses in a model based on mice. Remember, this is the second candidate. The first, BNT162b1, is already in human Phase 2/3 testing, after enrolling 25,000 of a planned 30,000 participants.

Messenger RNA, for those unfamiliar with it, is an RNA molecule, complementary to the DNA strands of a gene that leaves the cell nucleus, moving to the cytoplasm where proteins are made. The genetic code is then used to translate or change the body's instructions in response to the virus. That's the short course.

Considering that we are still dealing with proteins, and ultimately amino acids, could there also be an inflammatory response? Let's hope not. Indeed, let's hope the case in the U.K. is not related to that vaccine and is instead an isolated case. 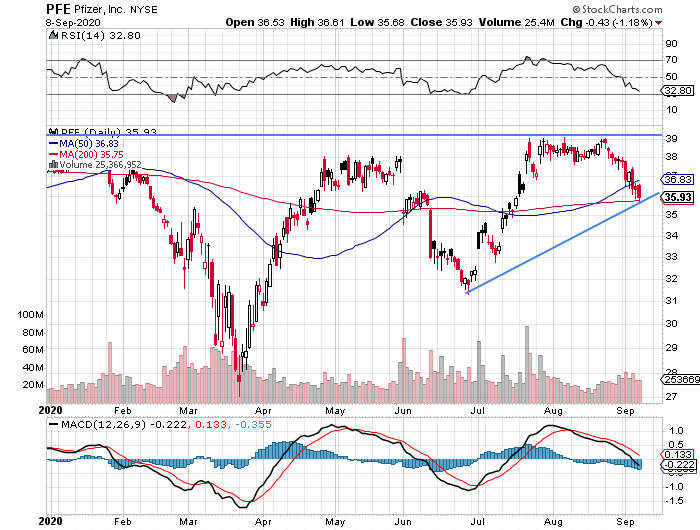 While the PFE chart shows a failed cup with handle pattern if one goes back to March, the chart now says that we may have an ascending triangle on our hands, supported by the 200-day simple moving average (SMA). While this position has not been wildly successful, for me it is in the green, and it does pay shareholders. The current dividend yield is 4.23%.

Pfizer earnings are not due until Oct. 30, so there will be plenty of Pfizer news out around that time if the company and the politicians have their way. Putting it bluntly, I will add to this long here on Wednesday, after this piece publishes.

Get an email alert each time I write an article for Real Money. Click the "+Follow" next to my byline to this article.
TAGS: Investing | Stocks | Healthcare | Pharmaceuticals | Real Money | Coronavirus