My focus is primarily on momentum stocks with strong technical patterns. However, occasionally a "value" play will catch my eye.

There are always good values out there but what they often are missing is some sort of catalyst to unlock the value. I don't like to let capital sit idle for too long, which is why I often avoid this approach.

I recently stumbled on a name in the oil sector, Penn Virginia Corp. (PVAC) , which explores for and develops oil primarily in the Eagle Ford area of Texas. PVAC earned $9.19 per share in 2018 and is expected to earn $10.36 in 2019. It trades with a trailing P/E of just 5.

Penn Virginia was set to be taken over last year by Denbury Resources (DNR) at an initial valuation of over $80 per share but the shareholders hated the deal because it was mostly cash and it was felt that it was too low. Activist fund manager, Mangrove Partners, which owns more than 10% of PVAC, fought the deal and it eventually fell apart with help from the very poor action in the fourth quarter of 2018.

The stock is now trading at a little more than half the price that many shareholders thought was too low last year. Nothing appears to have changed operationally and there is likely to be some comments from management in that regard before the earnings report in the next 30 days.

Chevron's (CVX) planned acquisition of Anadarko Petroleum (APC) illustrates that there is potential for deals in the sector. Management has indicated a desire for a deal and there is a major shareholder pushing for one. Even if there is no deal in the near term, the stock is trading as if the business is struggling which does not appear to be the case.

I have a position in PVAC and will be looking to add further as the stock develops. 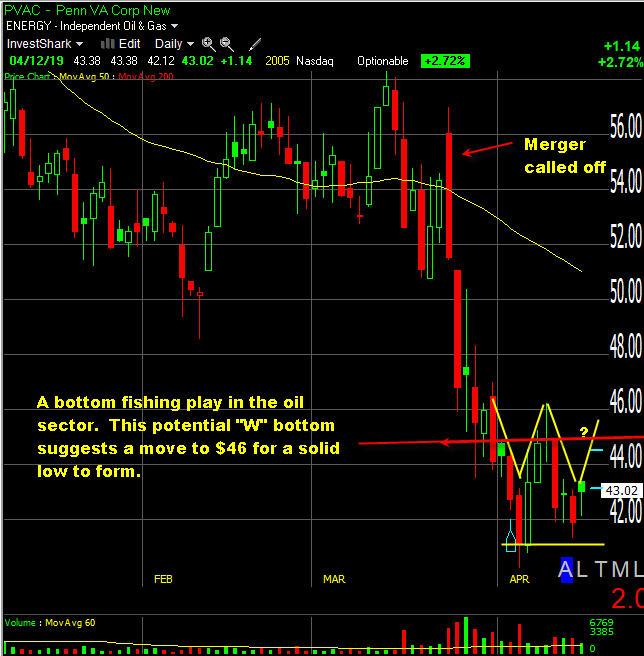 Get an email alert each time I write an article for Real Money. Click the "+Follow" next to my byline to this article.
TAGS: Fundamental Analysis | Investing | Stocks | Trading | Value Investing