The first sign that stocks are holding for me is always how many stocks are making new lows. Nasdaq has, at times in the last few weeks, given us a day here or a day there where we see fewer new lows than the day prior, but then a few days later that number increases yet again.

As of this writing, the number of stocks making new lows for Nasdaq has a peak reading of 732 on Friday. Monday's rally day chimed in at 657, so it's still a bit touch-and-go iffy in Nasdaq-land.

The New York Stock Exchange is a bit different as of now. It doesn't mean it will stay that way, but for the time being, the number of stocks making new lows on the NYSE peaked on Nov. 30, one week ago. There were 280 new lows and on Monday there were about half that at 137. That means that during the late in the week rout, we saw last week the new lows began contracting. It also means that it is possible that the 10-day moving average of NYSE lows could peak this week. 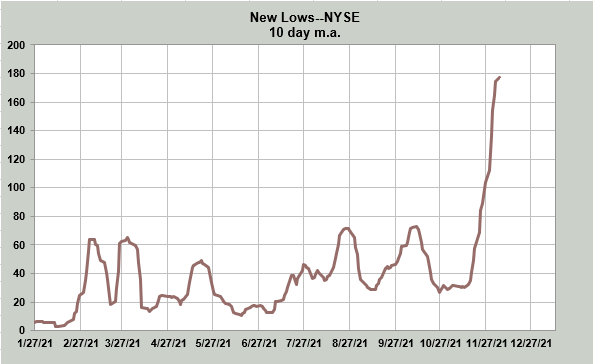 The number of stocks making new highs is still pathetic, but the NYSE saw 53 new highs on Monday, which is the most it has seen since just before Thanksgiving. 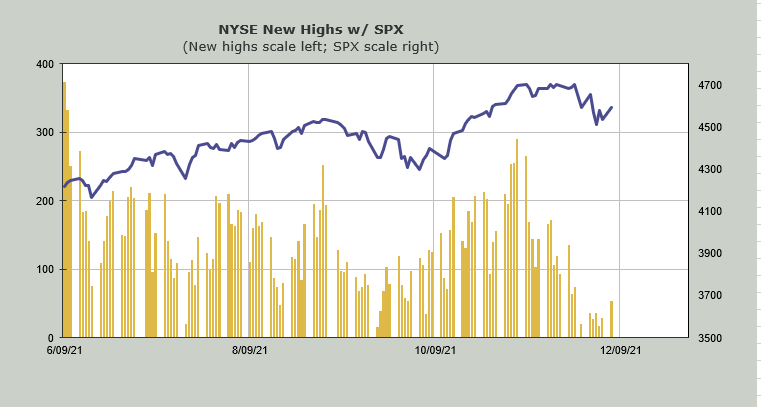 Earlier I noted that the Overbought/Oversold Oscillator had actually ticked up on Friday and explained that this was the oversold condition in the market at work. Now you can look at the Oscillator and actually see Monday's rally. Even if the market is down on Tuesday, we'll still be oversold. It's hard to say when we would be overbought, or no longer oversold, but suffice to say it will take more than one day of rallying.

There was one other minor change in the indicators on Monday. The McClellan Summation Index, which is still heading down now requires a net differential of positive 1,700 advancers minus decliners to halt the decline. That is the smallest number it's needed in four weeks. And considering the net breadth on the NYSE was positive 1,665 on Monday you can see what I mean when I note the minor change.

Finally Monday once again saw a high put/call ratio, this time it was 1.02, which makes it the third-straight day with a reading over 1.0 and it brings the 10-day moving average of this metric up to .95. Not quite two weeks ago it was in the low 80s so that's a shift. The peak at the September/October lows was .98.

It's hard to imagine volatility will magically disappear, but at least there are some positives we can talk about now. Even if the individual stock charts don't show it.