By STEPHEN GUILFOYLE Jul 27, 2022 | 11:23 AM EDT
Stocks quotes in this article: SNAP, GOOGL, GOOG, MNDT
When is pretty good... good enough?
Answer: When so-so performance (relatively speaking) comes after investors have already braced for the worst.
It's also always good to let Snap ( SNAP) lead things off for the group.
On Tuesday evening, Alphabet ( GOOGL)   ( GOOG) released its second-quarter financial results. For the period ending June 30, Alphabet posted GAAP earnings of $1.21 per share on revenue of $69.685B. While these top and bottom-line results both fell short of expectations, the revenue print was good enough for year-over-year growth of 12.6% or 16% in constant currency.
Operating income amounted to $19.453B (short of expectations), produced by an operating margin of 28%. This was down from 31% for the year-earlier period.
Net income dropped to $16.002B from $18.525B (-13.6%) for second-quarter 2021, which produced the above EPS print. That was down from $1.36.

Alphabet drove operating cash flow of $19.422B. After subtracting for purchases of property and equipment, the company was left with free cash flow of $12.594B. Both numbers were well below expectations.
TAC (Traffic Acquisition Costs) amounted to $12.21B, which was a beat. By the time we get to the balance sheet, Alphabet stands with a net cash position of $124.997B and current assets of $172.371B. Both of those numbers are down about $15B over six months.
Current liabilities amount to $61.354B. This too was lower, but only by about $3B. This leaves it with a current ratio of 2.81, which is healthy and beyond.
Total assets add up to $355.185B, including $25.326B in "goodwill" and other intangibles. Certainly not abusive. Total liabilities less equity come to $99.766B, including $14.734B in long-term debt.
This balance sheet, though gigantic across almost every metric, is simply in pristine condition.

Without really giving much in the way of specifics, CFO Ruth Porat went over a number of ongoing conditions impacting Alphabet's performance and what the company is doing about them. Porat first acknowledges the tough comps that Alphabet will face for the rest of the year. She then notes that "pullbacks in spending by some advertisers in the second quarter reflects uncertainty." Alphabet expects "an ongoing headwind from the fee changes and the slowdown in buyers spend that impacted results in the second quarter."
After acknowledging a 3.7% revenue headwind related to exchange rates for Q2, Porat goes on to tell investors to expect greater negative impact for foreign exchange going forward. Porat also mentions that hiring will slow down, that the company expects to close on the Mandiant ( MNDT) deal this year, and that CapEx will increase in 2022 versus last year with the bulk of investment in global technical infrastructure.

I have found 15 sell-side analysts that have opined on Alphabet since these earnings were released and are also rated by TipRanks at either four or five stars. Every analyst rated below four stars has been weeded out. Of the 15 analysts, all have rated Alphabet at either a "buy" or their firm's buy equivalent.
The average price target across these 15 analysts is $141.07, with a high of $160 (Brian Fitzgerald of Wells Fargo), and a low of $125, twice (Justin Post of Bank of America and Justin Patterson of KeyBanc). When omitting both that high and one of those lows, the average price target across the other 13 is $140.08.

I don't love this report. Of course it's solid, but Alphabet is having trouble meeting expectations in spots. I certainly don't love the outlook. How could you? At least it is an honest, if uncertain and pragmatic look at the short-term future.
I came in long some equity (GOOGL). I paid an average of $104.82 for the shares on Tuesday afternoon ahead of the digits. I also got myself long a $100/$109 strangle expiring this Friday for a net outlay of $3.90 just in case we had a runner.
The shares are up, but not running. 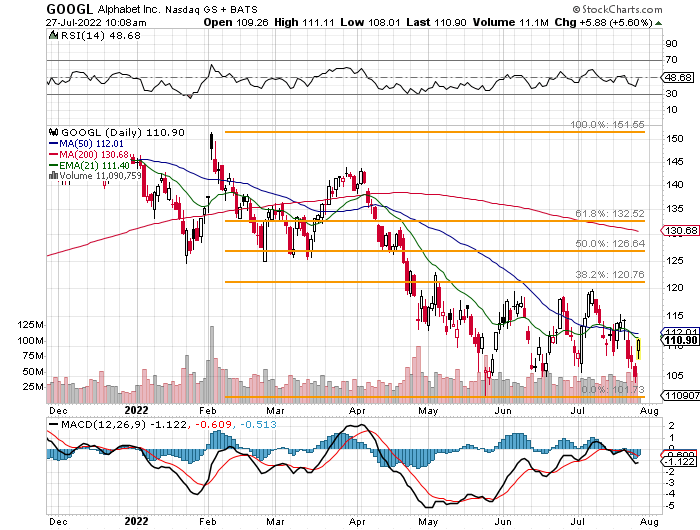 Readers will see that GOOGL peaked in early January and sold off through late May. The stock has repeatedly hit resistance at nearly a perfect 38.2% retracement of that move. There is now an established base for this stock between $101 and $120, having survived multiple tests on both ends of the range.
The stock appears to have failed to recapture its 50-day SMA this morning. We will have to watch to see if that line takes on new life as resistance. It has not in the past. Relative Strength (RSI) is just neutral, while the daily Moving Average Convergence Divergence (MACD) looks almost bearish in nature.

For me, this was just a trade. With the shares trading close to $111, I will be taking profits on the equity Wednesday morning. With my strangle now only worth about $3, I will be taking a small loss on the options side of my trade.
If I were interested in getting and staying long GOOGL, I would need to see a take and hold of both the 21-day exponential average (EMA) and 50-day SMA, as well as an improved RSI reading.
Get an email alert each time I write an article for Real Money. Click the "+Follow" next to my byline to this article.
TAGS: Earnings | Fundamental Analysis | Investing | Markets | Stocks | Trading | U.S. Equity

There are reasons to be optimistic about Hims & Hers Health and OptiNose Inc.