By STEPHEN GUILFOYLE Jul 06, 2022 | 01:00 PM EDT
Stocks quotes in this article: DIS, NFLX, AAPL, AMZN, T
The Walt Disney Company ( DIS)  -- either you love it, or you hate it. Or, you love to hate it.
Or, just maybe, you hate to love Disney. I think that's where I am. In late December, some of you will recall that the Walt Disney Company was my stock pick of the year. A lot of other financial talking heads who picked real clunkers for 2022 are likely writing half-way follow-ups for their readers. Only kidding.
I have been thinking about DIS a lot lately. The stock closed at $154.89 on Dec. 31. I see it trading with a $96 handle Wednesday morning, down year to date 37.6%. I sold the last of my shares in April at $134 and change. Not because I am some kind of genius, but because after some efforts taken in the name of risk management, that's when my net loss exceeded 8%. You know me and my 8% rule. Here is one example where it worked as intended.
Last week, I appeared on "The Claman Countdown" at the Fox Business Network, and Liz Claman asked me if I would rather own Netflix ( NFLX) or Disney. I answered instinctively: I would rather own Disney. So, let's think. The market has, for all intents and purposes, burned down around us this year. The U.S. and global economies are headed for either a recession or something very, very close to one. Inflation is way too high. The dollar is probably too strong. What does this mean? In addition, is it indeed time to revisit Disney. Not the Grand Floridian. The stock.

The political feud between the firm and the state of Florida appears to have finally vacated the headlines. Last week, the company's board unanimously extended CEO Bob Chapek for another three years. Chapek succeeded the legendary Bob Iger and desired the immediate success of a growing, but still money-draining streaming business, almost all of the firm's other businesses relied upon the aggregation of customers for the intention of providing mass entertainment.
The pandemic severely hampered all of those businesses. The theme parks and hotels were empty, the ships were not sailing, and the movies were not showing. The cash flow machine was not flowing. All things considered, although I hear complaints regarding price and or politics, Chapek guided this firm through something most other leaders or firms probably couldn't get through standing up. All told, how does Disney not give Chapek at least a few more innings?
While all of this is going one, we have another competition: Disney, Apple ( AAPL) and Amazon ( AMZN) have all placed bids for the high profile (and awfully expensive) NFL Sunday Ticket package. DirecTV, still 70% owned by AT&T ( T) paid $1.5 billion per year for the existing rights. That deal expires after the upcoming season. The attraction for these three firms will be in the subscriptions to the services that the package is known to drive and then the additional (not cheap) fee for the games themselves.

Disney is not expected to report its fiscal third-quarter until Aug. 5. Currently, Wall Street sees adjusted earnings per share of $1.00 (range of $0.76 to $1.29) on revenue of 20.5 billion (range of $19.4 billion to $21.2 billion). At consensus, these numbers would be good enough for earnings growth of 25% on revenue growth of 20.6%.
Readers and especially investors will recall that for the second quarter, Disney posted adjusted earnings per share of $1.08 on revenue of $19.24 billion. Both numbers fell short of Wall Street's expectations. The firm did add 7.9 million Disney+ subscribers for that period, though, and that was better than expected. Disney ended that quarter with 137.7 million Disney+ subs, 45.6 million Hulu subs, and 22.3 million ESPN+ subs. I subscribe to all three. The Disney bundle is the best deal in streaming. Just my unsolicited opinion.

Fundamentals Get a Passing Grade

As the underlying businesses have reopened everywhere now that the Chinese parks are open, the firm's fundamentals have been making up lost ground, often testing imposed capacity restrictions. For that April quarter, Disney drove free cash flow of $0.38 per share, returning free cash flow to positive territory after having gone negative the quarter prior. This left a net cash position of $13.272 billion on the balance sheet and current assets of $31.427 billion, including inventories of $3.224 billion. Current liabilities added up to $29.601 billion, leaving the firm with a current ratio of 1.06. In my book, while not great, that is acceptable, especially considering what this firm has been through. Omitting inventories, the quick ratio comes to 0.96. We don't love that quick ratio, but given at least a piece of the business is retail focused, the quick ratio is not necessarily required for a passing grade, and this one is close.
Total assets amount to $202.453 billion, including $93.894 billion in "goodwill" and other intangibles. Now, I usually harp on balance sheets that show 46% of all assets as intangible, and I don't love it here. That said, if any firm in our corporate universe is entitled to claim intangible assets more so than Disney, I have never heard of them. The brand, the characters, the content, the ideas? They're all worth real, but unquantifiable (unless actually sold) money. Total liabilities less equity totals $98.44 billion including $46.624 billion in long-term debt (of which $3.536 billion is considered current).
The balance sheet passes, not by flying colors, but it passes, as long as there is consistent effort to improve its quality. The debt-load is higher than I would like. It was a necessary pandemic era build. I get that, but it needs to be worked lower and I am impressed to say that the long-term debt-load has shrunk in size for four consecutive quarters and for seven of the past eight.

Readers will note that the current downtrend really accelerated in September 2021 and with the exception of some late winter volatility, really has never let up since. The 21-day exponential moving average (EMA) has provided consistent resistance really since March 2022. The stock now trades at a 6.8% discount to its 50-day simple moving average (SMA) and an incredible 30.7% discount to its 200-day SMA. 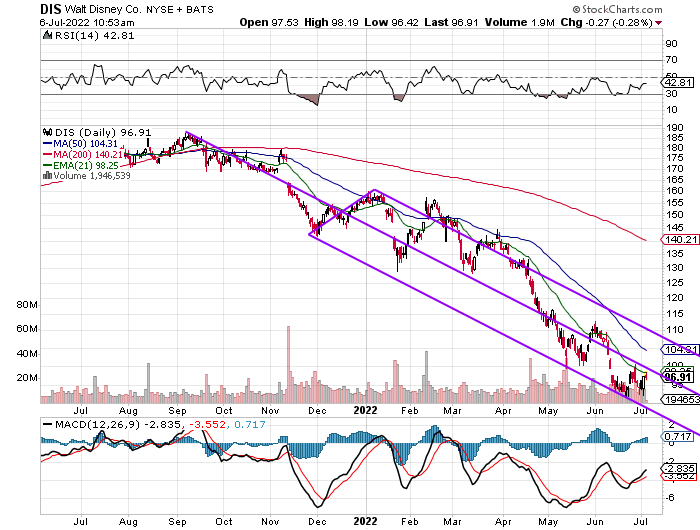 That said, the shares bottomed most recently at $92.01 on June 22, but has been trading in a fairly tight range since June 10. Since that time, Daily Relative Strength has improved to near-neutral, the daily Moving Average Convergence Divergence (MACD) oscillator has seen a bullish crossover of the 26-day EMA by the 12-day EMA. While both of those averages are still headline negative, the 9 day-EMA has gone positive. 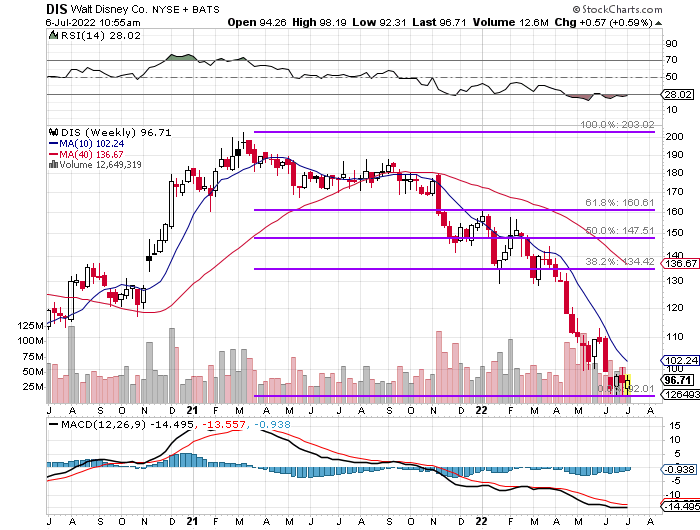 This could be an attempt to base the stock here. We already saw a false bottom  at $100, and that line failed, so this is a second  attempt to bottom.
Readers will also note that the stock is feeling around for support in the same area for a fourth week in a row this week. Volume has increased as this battle has intensified. One negative note here, the weekly MACD does not show a bullish crossover and all three moving averages remain negative. Relative Strength on the weekly chart remains technically oversold. I would note that a 38.2% Fibonacci retracement of the entire March 2021 through to the present would have the stock retake the 10-week SMA and end up approaching the 40-week SMA (which would probably be lower by then).

My Thoughts: Let's Try to Have Fun

The fundamentals are slowly improving. The technicals are also slowly improving, although probably a little quicker than the fundamentals.
There are headwinds. A recession will curtail consumer sending and ultimately travel. A stronger dollar will slow foreign visitation to the U.S. parks and on the cruise ships. The stock is officially inexpensive at just 17-times forward looking earnings after having been relatively expensive for years.
Given the valuation, and the cash flow, despite some obvious headwinds, I think that if one were to start building or rebuilding a long position in DIS, that perhaps the time is now to wet the beak. Now, I was wrong in December, so take what I'm saying with that in mind.

I am already in a series of $100 and $105 DIS calls across a number of explorations.
Net Basis: $91.70
The idea here is to get long some equity and to sell a covered call against the position to reduce net basis. The investor is also going to buy a less expensive call with a higher strike price and the same expiration just in case the shares have taken off by then. The investor also sells discounted equity risk well below the current last sale in order to further reduce net basis at a strike where the trade is comfortable increasing position size.
Best Case: Investor ends up long 100 shares in September with shares trading above $115.
Good Case: Investor is called away in September above $105 for 14.5% profit.
Worst Case: Investor ends up long 200 shares in September at a net basis of $88.35 and DIS trading below $85.
Get an email alert each time I write an article for Real Money. Click the "+Follow" next to my byline to this article.
TAGS: Luxury Travel | Investing | Entertainment | Stocks | Digital Entertainment