It's December and this is the time of year that Wall Street likes to promote their annual forecasts.

Some of these prognostications are delphic and the reader has no clear idea of whether they are bullish or bearish.
Other forecasts are all rosy and bullish with upside price targets but no risk parameters if they turn out to be wrong.
Some forecasters see the market and life as "half empty" and they quickly get labeled as "gloom and doomers" and are told to stand in the corner. Bears are really not welcomed on Wall Street -- they are bad for business and are soundly discouraged by their bosses. Bears are also not welcomed in social settings today even if fully vaccinated and double masked.
After nearly 50 years "in the business" I try to put aside the distractions and ignore pressures to conform and genuinely give readers my best advice.
First, let's cover a number of topics that go into my thinking.
Forecast for calendar year 2022 and beyond - the recent November-December pullback/correction/slump caught many, I believe, by surprise. I spend the vast majority of my time working for Real Money by looking at individual stocks and a growing number of them were showing "wear and tear" this fall.  Some stocks were extended or overbought and thus more vulnerable to any disappointment in earnings or weakness in guidance. Many market observers will blame the weakness on Covid or the Federal Reserve talking about tapering or some current headline while they miss the discounting of the risk that the economy could be slowing in the months ahead.
I look for the S&P 500 to decline to the 3000 area and make a low in the late second quarter or early third quarter of 2022. With the S&P 500 trading around 4700, this represents a loss of around 36%. We can label it a bear market if you want but a flexible strategy is more important than a label.
The major averages are quickly rebounding now and may even go on to make slight new highs in the weeks ahead but a strategy of taking profits into available strength the next two months is going to be my guidance. There should be some recovery in late 2022 into 2023 and a new high could be seen in early 2024. This, however, does not mean one should ride the market down and back up again. Leadership is always changing and the leaders in the last rally are probably not going to be the leaders in the next advance. The averages could recover but not your stocks and that can be very frustrating.
My bearish views are more subjective than anything else. I have been seeing more and more stocks that have had big run-ups and have traded a lot of volume in the top end of the move. They then break below a support line or neckline, where holders get trapped on any lower prices. This process is now happening in many stocks.
Another way of looking at the charts is to look at the bases and consolidation patterns. Since the secular low in early 2009 I have been seeing a progression of smaller and smaller upper-level bases. Smaller bases tell me that there are fewer and fewer buyers involved in the advance and thus the advance is becoming old and fragile.
In this weekly chart of Eli Lilly ( LLY) , below, we can see how prices made a three-year consolidation from the middle of 2015 to the middle of 2018. The consolidation in 2019 lasted about one year and the consolidations in 2021 have been even shorter in duration. I do not consider this a healthy long-term development.

The Advance-Decline Line is a technical tool that dates back to the 1920s with research done by Colonel Leonard P. Ayres. Ayres was the founder of a company called Standard Statistics, which eventually merged with a company called Poor's Publishing -- still around today as Standard & Poor's.
A market advance is healthy and durable if a broad list of stocks participate in the rally. A shrinking or declining list of companies participating in the rally tells us that beneath the surface and away from the indexes the market is weakening.
In this daily chart of the Nasdaq Composite, below, we can see that prices have trended higher but the advance-decline for this index has trended lower. This is not a positive development. 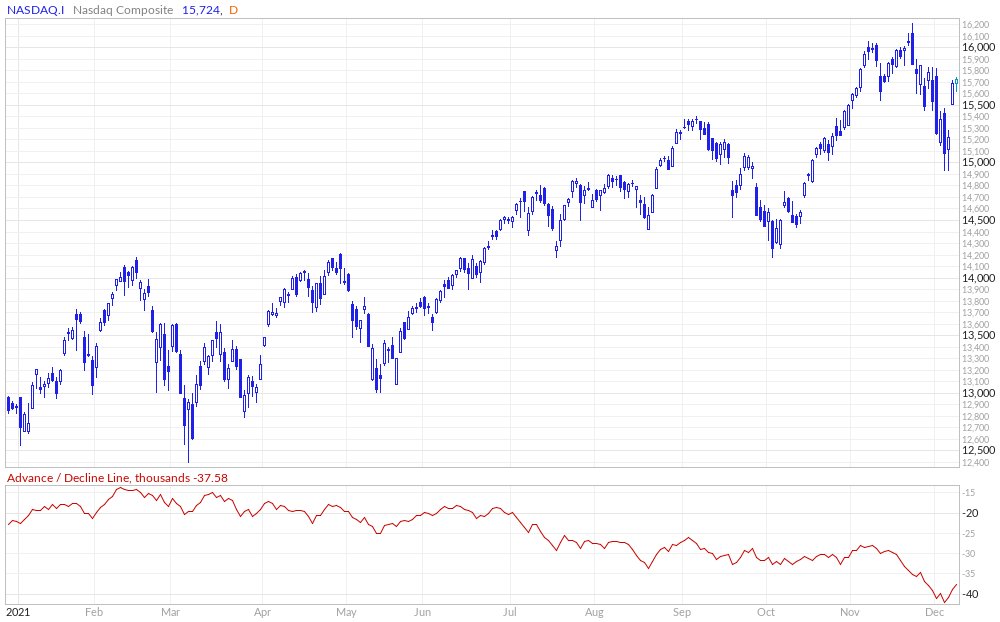 In this daily chart of the S&P 500, below, we can see that prices have traded higher but the advance-decline has been stalled the past three months. New highs in the S&P in the weeks ahead with fewer and fewer advancing stocks will be a sign that the rally is more vulnerable to a downside reversal. 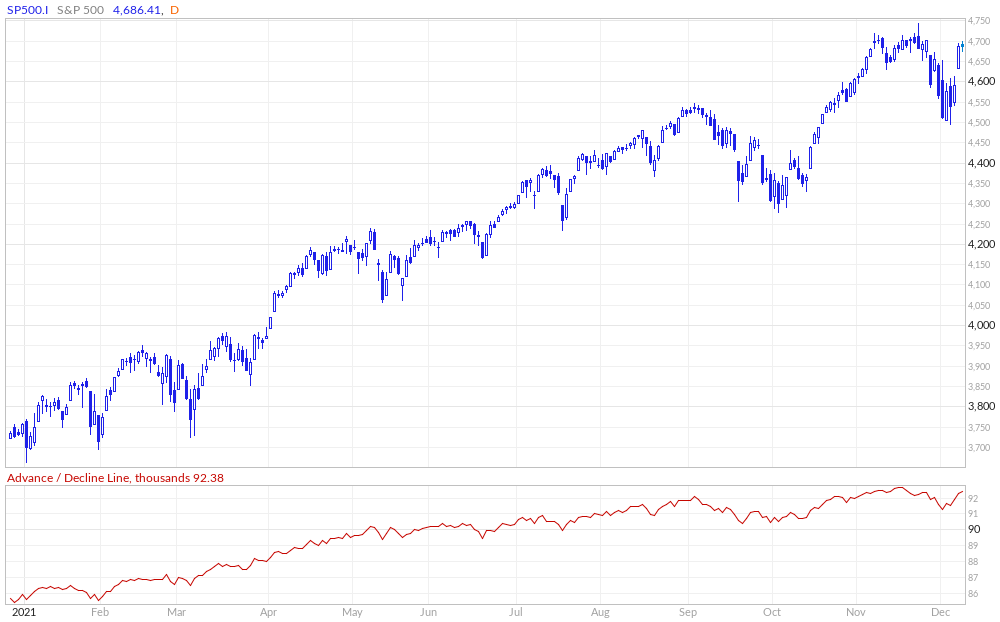 In this quarterly chart of the S&P 500, below, we can see seven record highs. Seven quarters where prices have rallied. The first quarter of 2022 will be the eighth quarter, in my view, and we should be on guard looking for a top reversal pattern keeping in mind the 8-10 record high pattern.
I have seen this pattern work on daily, weekly and monthly charts but I never found it on a quarterly chart. My early technical mentor Ralph Acampora, CMT used to remind me that the longer a trend goes on the more important it becomes and the more we need to pay attention to it when it changes.

Many market watchers like to selectively use the direction of copper prices as a short-hand for the economy. In this monthly candlestick chart of the nearby copper future (below) we can see some large upper shadows after prices more than doubled in the past two years. Copper futures look more likely to trade sideways for several months suggesting a balance between supply and demand.

The U.S. dollar (chart below) looks like it can recover further as it attempts to gain back the ground it lost in 2020. Upside momentum is not particularly strong so I do not expect the dollar to climb much further.

Eventually the U.S. dollar is likely to resume its decline and that should, when it develops, lift commodity prices.

I don't have hard numbers but I think that too many new people are jumping into the stock market, especially in the past two years when they have been stuck at home. Some of them are making money but they have also shown to me that they are unable to handle risk. You do not find this at a market bottom.
For me, sentiment is divided into three parts: What people are doing with their money. What people are saying on TV or in print or at cocktail parties. Lastly, anecdotal stories.
Here is an anecdotal story.
I am on the Executive Board of my synagogue. Some members have passed away in the past year and left some of their estate to the synagogue. An endowment has been set up and guidelines are being written.
I got a significant amount of "push back" when I proposed that the balance of the account be checked monthly and that the treasurer ask questions of the money manager when the balance declines 5% from a high. Members of the board believed that only a quarterly check on the account was more than sufficient.
Has the bull market gone on so long that we really don't need to watch our investments? Has 2007-2008 been erased from our collective memories?
Maybe we might want to print out these words from a hymn and keep them near our computer monitor as we move into 2022.

Near the cross! I'll watch and wait,
Hoping, trusting ever,
Till I reach the golden strand,
Just beyond the river.
In the cross, in the cross
Be my glory ever,
Till my raptur'd soul shall find
Rest beyond the river.
Get an email alert each time I write an article for Real Money. Click the "+Follow" next to my byline to this article.
TAGS: Commodities | Currencies | Economy | Indexes | Investing | Markets | Stocks | Technical Analysis | U.S. Equity