"Nobody ever told me, I found out for myself

You gotta believe in foolish miracles

It's not how you play the game, it's if you win or lose

... is why nearly every financial media outlet thought it necessary to cover Thursday's virtual House Financial Services Committee Hearing all day long. Don't get me wrong. Holding the hearings is a great idea, but televising the event for hours upon hours for an audience that has these channels on all day because they run "the tape" for free and not so much for the content? Really? I mean, how many (or how few) guests are there where you "unmute" the TV? For me, there are only a few. The large trading floors all have their TVs on mute. I mean, at least they did back before almost all of Wall Street was working from home.

As for those of us working remotely, we all made some (or lost some) cash from the events of late January and moved on. Why? Because we are mercenaries in our heart. We are opportunistic by design, As opportunity passed by, so did we.

On Thursday, I nearly dozed off at work more than once. I had to stand up and walk around in order to stay alert. Of course I have always been against payment for order flow. Of course I think the very concept is contradictory to values that I hold dear, values that anyone interested in the purest form of well-developed price discovery would hold dear. It takes no genius to figure out that off-exchange trading is less transparent than trading in public. Duh. I have been fighting that fight for probably a decade and a half. The good guys lost that fight. Your word is -- I mean, you word was -- your bond. Now, we have quote blur. Real nice.

Retail traders, know this: Once again, it became painfully obvious that many of those elected who hold positions on the Financial Services Committee are painfully ignorant in an area that they obviously should have made more of an effort to learn something about. It became painfully obvious that several of those questioned were highly intelligent individuals with businesses to defend. It also became painfully obvious that among these intelligent individuals, the one known as "Roaring Kitty" was just a little bit smarter than everyone else. I did have to wonder just why Gabe Plotkin of Melvin Capital was there. This is the multi-decade Wall Street veteran running a "hedge fund" who apparently never learned anything about risk management on the way up. The word "hedge" is in the term "hedge fund." I don't know... maybe look it up in the dictionary if you have to. Guess he was lucky all this time. Or backed by the right people.

For added enjoyment, play Ozzy Osbourne's "I Don't Know" on YouTube while you read, and just listen to the nearly incomparable Randy Rhoads on lead guitar. That's magic.

On Thursday morning the stage was set. Weekly Initial Jobless Claims hit the tape much higher than expected. So did Continuing Claims. Housing Starts badly disappointed. Import and Export prices for January were hot as heck, just a couple days after domestic producer prices for January simply sizzled. Equity markets opened significantly lower on Thursday and kept going lower for about another hour. Throw up a five-minute chart of Wednesday and you'll see the same pattern that you saw on Thursday, just with Thursday half a peg lower than Wednesday. Oh, algorithmic traders, you don't even know enough to hide your intentions. Why should I complain? You don't even know that we are out here, playing you like a Stradivarius. I know. Laughing at 12-year-olds falling off of skateboards on YouTube is way more interesting than preventing pattern recognition. This is who you gave our market to? Amateurs.

Very interestingly, losers beat winners at the New York Stock Exchange (NYSE) by 2 to 1 and at the Nasdaq Market Site by 5 to 2. Declining volume trounced advancing volume at both exchanges. Energy finally caught a beat-down, as did Materials and the Financials. Those three groups were soft for good reason, though. The Saudis are looking at higher oil prices as a wolf looks at a stray calf, the U.S. dollar rallied midday (it's weaker now), and the 10-year note rallied midday (contracting yields that have expanded overnight).

What does it all mean? I think it means that Mr. Market wants to sell off a bit, but is too frightened to do so in front of a potentially very large stimulus bill, in front of a candy-cane-fueled surge in both consumer-level inflation and government-enforced economic growth. The Atlanta Fed's GDPNow model, even after Thursday's report for January Housing Starts, still shows first-quarter GDP growing at 9.5% quarter over quarter, seasonally adjusted and then annualized. Just keep in mind that the model is not a prediction, but more of a real-time snapshot of already gathered data, so it only reads fourth-quarter data to this point.

Remember what I have told you about 21-day EMAs (exponential moving averages)? Portfolio managers, or at least enough of them, and their risk managers pay a lot of attention to 50- and 200-day SMAs, which is why I talk about them so much, but short- to medium-term traders and swing traders often follow that 21-day EMA just as closely if not more so. Check this out....

Golly, Sergeant. Looks like the Nasdaq Composite has ridden this pony all the way from early November to the present, and for a fifth time since then was tested at just about 10:30 ET on Thursday morning after all of that "iffy" data hit the tape. Midday turnaround at a key short-term technical level on reduced trading volume. Hmm.... Survey says -- and I have only asked the man in the blackened window -- that one person was asked if the market will try to rally on Friday morning, and 100% of those surveyed said, "Yes. I think it will."

When to "Unmute" the TV

When Jim Cramer is on? Of course. When Sarge is on? Turn it up to 10 and DVR the segment. That guy's cool (and charming). There are several others. Treasury Secretary Janet Yellen, all kidding aside, leads the list. Yellen appeared on CNBC late on Thursday afternoon.

Yellen also scared the living spit out of my inner economist (who happens to be of the Austrian school and a fiscal hawk at heart) when she said, "Inflation has been very low for over a decade, and you know it's a risk, but it's a risk that the Federal Reserve and others have tools to address."

I feel so conflicted. As a trader, I say let's turn on the juice, baby. As an economist, I have been around long enough to know that the Federal Reserve craves inflation overshoot, and their idea of problematic inflation is probably not the same as yours and mine.

Nvidia (NVDA) is releasing four dedicated cryptocurrrency mining processors that will be available in the first and second quarters of this year, while limiting the hash rate of the GeForce RTX 3060 GPUs to 50% of its actual rate in order to make high-end graphics cards less attractive to miners. Does this do something to alleviate the broader chip shortage? Probably. Will this streamline production? Yes. Will this make Nvidia some dough? I'm going with certainly. I reiterate my price target of $670 for Nvidia, which happens to be a holding of Jim Cramer's Action Alerts PLUS charitable trust.

Palantir Technologies (PLTR) saw its lockup period expire on Thursday (yes, in a previous note I did tell you Friday). Trading volume spiked as the shares sold off. Soros Fund Management, at one time long 18.46 million shares, has made plain its intention to get out of the stock. No idea how much progress has been made since Thursday.

Do I have an interest? Sure I do. The stock has wobbled coming out of earnings and heading into this period of increased supply. Still, projected revenue remains strong, at least for the current quarter, and most of Wall Street seems to think that Palantir can have a profitable year. You'll recall that Goldman Sachs upgraded the name to a "buy" and increased its target to $34 from $13 after earnings based on the order backlog and the collaboration with IBM (IBM) .

What I see are a couple of gaps that could very well fill for this software platform/defense contractor. Check it out... 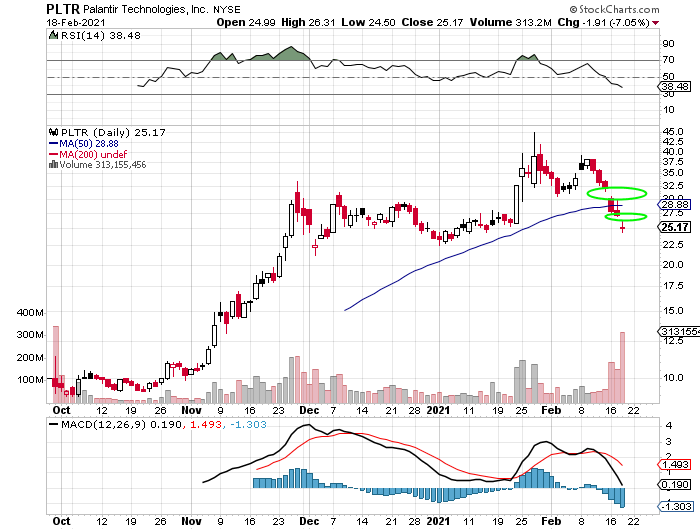 Nearly oversold, too. This stock is going back to at least $31 in my opinion. My plan is to leg in slowly. The sellers are probably not done, but you have no idea when they will be.

Get an email alert each time I write an article for Real Money. Click the "+Follow" next to my byline to this article.
TAGS: Economy | Indexes | Investing | Markets | Stocks | Semiconductors & Semiconductor Equipment | Software & Services | Real Money | Cryptocurrency