All the charts of the major equity indices suffered some form of technical damage Thursday. Indeed, all but one violated its near-term support level. Cumulative market breadth deteriorated further as well.

Still, indicators say markets are now significantly oversold, despite a lack of bottoming signals within a weakening structure. 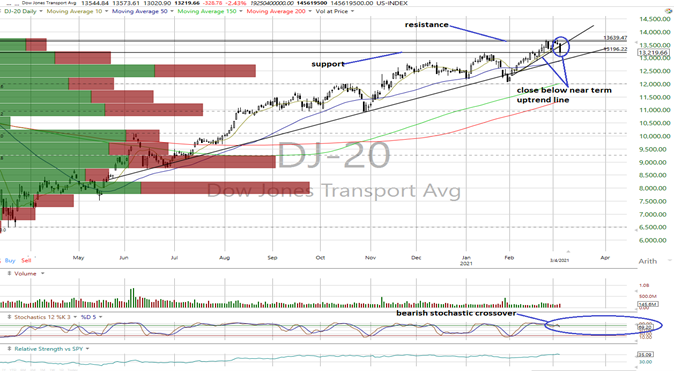 All the major equity indices closed lower Thursday with very negative internals and heavy trading volume on the NYSE and Nasdaq as all closed near the mid-points of their intraday ranges.

Every index, with the exception of the Dow Jones Transports (see above), closed below its near-term support level while the S&P 500 and DJIA closed below their 50-day moving averages.

Trends broke as well, with the S&P, Nasdaq Composite, Nasdaq 100 and Russell 2000 in downtrends.

The Dow Transports closed below its uptrend line and is now neutral while also flashing a bearish stochastic crossover signal.

The DJIA and MidCap 400 are neutral with the Value Line Arithmetic Index still positive.

Cumulative breadth worsened as it remains negative on the All Exchange, NYSE and Nasdaq but all are now below their 50 DMAs.

We have yet to discover technical bottoming signals being registered.

The McClellan one-day Overbought/Oversold Oscillators are deeply oversold on the All Exchange and Nasdaq (All Exchange: -116.13 NYSE: -85.87 Nasdaq: -140.26). In fact, the Nasdaq OB/OS is near levels seen in March of last year near the market lows. However, their recent oversold signals have failed to produce positive results.

The Open Insider Buy/Sell Ratio at 20.7 shows a small increase in insider buying but remains in bearish territory as they have yet to see current prices as worthy of purchase on their part.

The leveraged ETF traders measured by the detrended Rydex Ratio (contrarian indicator) rose to 0.88 and remains neutral as they bought with expectations of a bounce. They would produce a bottom signal when leveraged short, which is not the current case.

This week's Investors Intelligence Bear/Bull Ratio (contrary indicator) was little changed at a bearish 18.5/56.3 suggesting too much optimism exists on the part of investment advisors.

Valuation still appears extended but a little less so.

The forward 12-month consensus earnings estimate for the S&P 500 from Bloomberg of $173.63 per share leaves the S&P's forward P/E multiple at 21.7x, while the "rule of 20" finds fair value at 18.5x. We reiterate that the valuation spread has been consistently wide over the past several months while the forward estimates have continued to rise consistently.

We remain near-term "neutral/negative" in our outlook for the reasons discussed above.