On Tuesday evening, after equity markets had sold off fairly hard all day long, big data platform provider MongoDB (MDB) released the firm's fiscal third quarter financial results. The stock that had given up 2.71% during the regular trading session on Tuesday, ran as much as 28% higher overnight.

GAAP net income/loss came to $-84.841M, down from $-81.293M a year ago. Adjusted net income/loss increased to $19.759M from $6.288M. Make no mistake. MongoDB did beat expectations and did so decisively. That said, tearing the numbers apart does open some eyes.

Total assets come to $2.467B. Goodwill of $57.8M only makes up a small fraction of that. Total liabilities less equity comes to $1.783B. This includes $1.139B in convertible senior notes.

This balance sheet is obviously in great shape. The firm can burn cash almost forever and still be okay at the current pace based on this.

I tried to stick to sell-side analysts rated at four stars or better, but I have only found four such individuals who have opined on MDB since last night, and one of those did not even provide a target price. Just an FYI, of those four, there were two "buys" or buy-equivalent ratings and two "holds" or hold-equivalent ratings.

Once I let everyone in the pool, and included all analysts of all ratings at TipRanks, I got nine opinions. After going over the nine analysts who have mentioned the stock since these earnings were released, we have six "buy" or buy-equivalent ratings and three "hold" or hold-equivalent ratings. We have eight target prices.

I like this growth. I love the quality of the balance sheet. I definitely do not like the level that stock based expense is running at. The stock came in with almost 7% of the entire float held in short positions. That's not gigantic, but it is large in my opinion. At least part of this overnight run to destiny is probably some of those shorts capitulating. Don't feel sorry for them. This stock traded at $590 little more than a year ago. Some of them are ringing the register this morning. 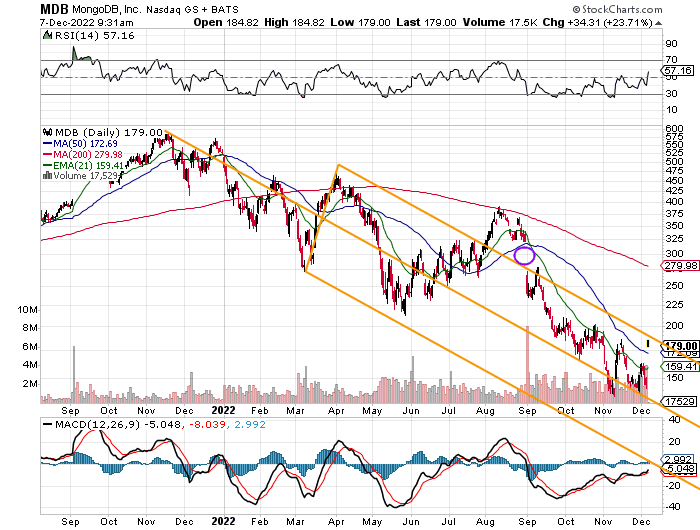 The stock will attempt to pierce the upper trendline of this Pitchfork on Wednesday. Note that it's not really a trendline in this case, I am using it more as a guideline. MDB broke out in August and then created an unfilled gap between $321 and $263 when it broke back down. That gap is what the bulls see. 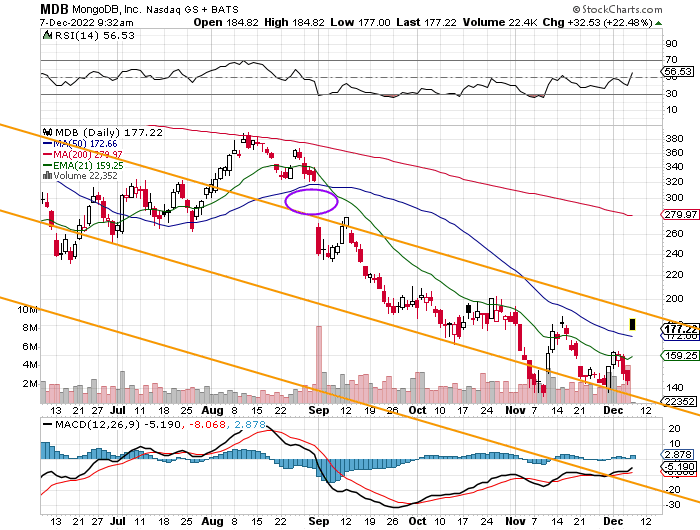 The real test will be if for the short-term, MDB can hold the 50-day SMA at $173. Doing so for the day would be crucial as I would expect any short squeeze to have largely washed out by then. Support here would have to come from new money.

I am more inclined to short MDB myself at some point today for a trade, rather than purchase equity for either a trade or an investment after the horses have left the barn. I believe that for now, the horses are gone. This company is not yet profitable and does not produce positive cash flow. That will cost it just as dearly down the road as it already has. I believe anything in the $180's is ripe for careful shorting or profit taking for those already long.

Get an email alert each time I write an article for Real Money. Click the "+Follow" next to my byline to this article.
TAGS: Short-selling | Earnings | Investing | Stocks | Technical Analysis | Trading | Software & Services | Technology