On the first "Executive Decision" segment of Mad Money Tuesday night, Jim Cramer sat down with Dirk Van de Put, chairman and CEO of Mondelez International Inc. (MDLZ) . Van de Put has "revolutionized" this company, which had a great earnings report in late April and is doing fantastic, Cramer reasoned.

We don't take a one-size-fits-all approach to our global markets and listen to what consumers in each region want and try to adapt to their preferences, Van de Put said. Brands need support when it comes to food, and we're willing to spend, he added, but the company is also focused on cost control too. The global consumer is "doing pretty" good, but it's clear that there's unease among the global middle and lower classes. Consumers are eating more on the go and indulging with more snacks.

Van De Put also said the company is looking at CBD options. While they won't be the biggest players in the market, it's something to be prepared for, he said. Let's check and see what options the charts show us today.

In the daily bar chart of MDLZ, below, we can see a mixed technical picture. Prices staged a strong rally from late December to the middle of May but now some signs of caution have come to the fore. MDLZ was down sharply Tuesday and could test and maybe break the rising 50-day moving average line Wednesday.

The daily volume pattern shows declining volume into April but heavier volume in May suggesting that there was selling into the recent highs. The daily On-Balance-Volume (OBV) line was bullish from late December but it looks to have "topped out" and broken its uptrend. A declining OBV line signals a turn to more aggressive selling.

In the lower panel of this first chart is the 12-day price momentum study, which shows weakening momentum peaks from February to May despite prices making higher highs. This is a bearish divergence and tells us that the pace of the advance has slowed which can foreshadow a correction or decline.

In the weekly bar chart of MDLZ, below, we can see that this year prices broke out on the upside from a long consolidation pattern. MDLZ is above the rising 40-week moving average line but that is not the only indicator we watch.

The weekly OBV line lagged the price action and only broke out to new highs in April and it looks weak in May.

The weekly Moving Average Convergence Divergence (MACD) oscillator is above the zero line and rising, which is bullish. However, the two moving averages that make up this indicator have been narrowing and they could cross to the downside for a take profits sell signal.

In this Point and Figure chart of MDLZ, below, we can see a potential upside price target of $66 but a decline to $50.51 will weaken the picture in the short term. 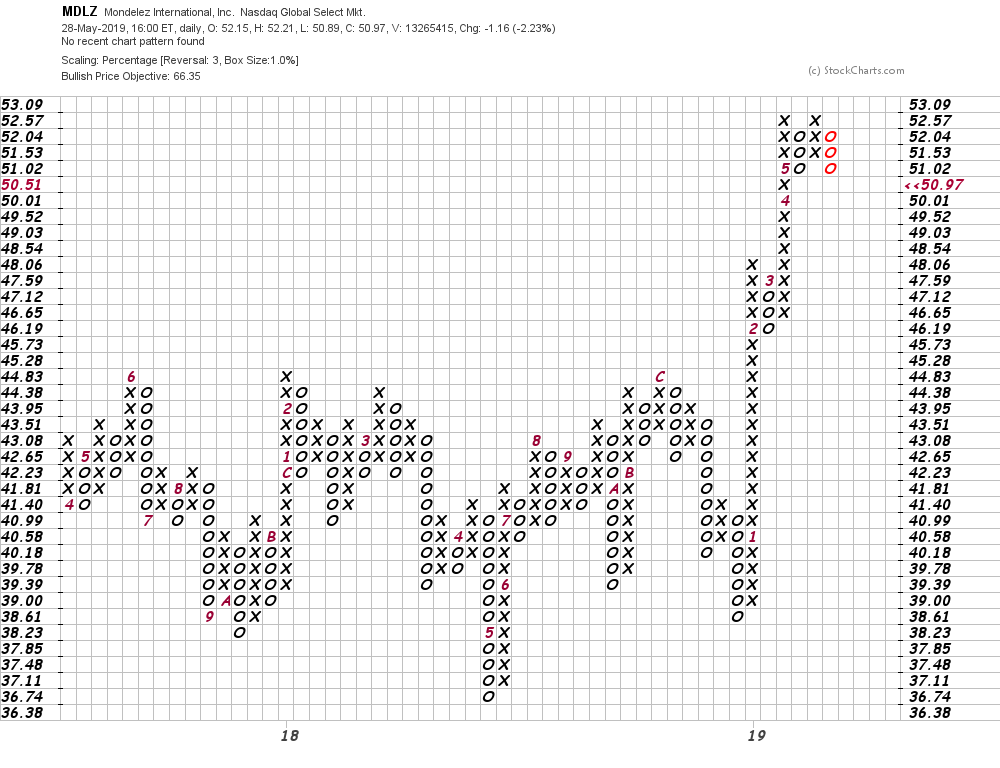 Bottom-line strategy: It looks like MDLZ can weaken with the broader market. Longs should be prepared for a correction or pullback at least into the $49-$48 area.

Get an email alert each time I write an article for Real Money. Click the "+Follow" next to my byline to this article.
TAGS: Investing | Stocks | Technical Analysis | Food & Drink | Mad Money | Executive Interview

These four names provide a way to stay in the game -- from a safe distance -- and grow some green.

In a Stock-Picker's Market, the Results May Surprise You

Returns can be robust if the conditions are favorable, but it won't always be so fruitful.

Walmart Remains in an Uptrend, Continue to Trade It From the Long Side

It generally pays to stay with the trend in force and to focus more on closing prices than opening prices.

SPCE is about commercial spaceflight, the future, and possibly a radical shift in some commercial airline travel as well.