Jim Cramer told his Mad Money audience that the market should've bounced Thursday, with interest rates taking a breather, but instead the volatility continued. That's why he told his viewers they must never stop looking for opportunities, because there are plenty of stocks that can handle an economic slowdown.

One of those stocks is Molson Coors (TAP) , which is why Cramer checked in with president and CEO Gavin Hattersley, to learn how the company is faring.

Hattersley said sales of their core beer brands, like Miller Lite and Coors Lite, continue to be strong and are still growing in the market. Molson also has a stable of other strong brands that are all exceeding expectations.

Molson has also partnered with Coca-Cola (KO)  to bring Simply Spiked Lemonade to the market and Hattersley confirmed that sales will kick off next month and orders are already very strong. In the spiked seltzer category, Topo Chico remains at the top of its game, as does Zoa energy drinks.

While Molson Coors is not immune to inflation, Hattersley said the company is well hedged against excessive cost inflation. Even in a recession, Molson Coors is positioned for success, he said.

Let's check out the charts of TAP.

In this daily bar chart of TAP, below, we can see that the shares have made a low or bottom in November/December and have climbed higher into April/May. A great performance compared to the broader market averages. The shares are trading above the rising 50-day moving average line and the bottoming 200-day line.

The On-Balance-Volume (OBV) line shows improvement from late October telling us that buyers of TAP have been more aggressive. The Moving Average Convergence Divergence (MACD) oscillator moved above the zero line early this year but it has had a choppy path.

In the weekly Japanese candlestick chart of TAP, below, we see a mixed picture. Prices are in an intermediate-term uptrend and trade above the rising 40-week moving average line.

The weekly OBV line has diverged from the price action for months and is potentially bearish as volume is not confirming the price action. The MACD oscillator has narrowed and is close to a downside crossover and take profit sell signal.

In this daily Point and Figure chart of TAP, below, we can see that the software is projecting a possible downside price target in the $48 area. 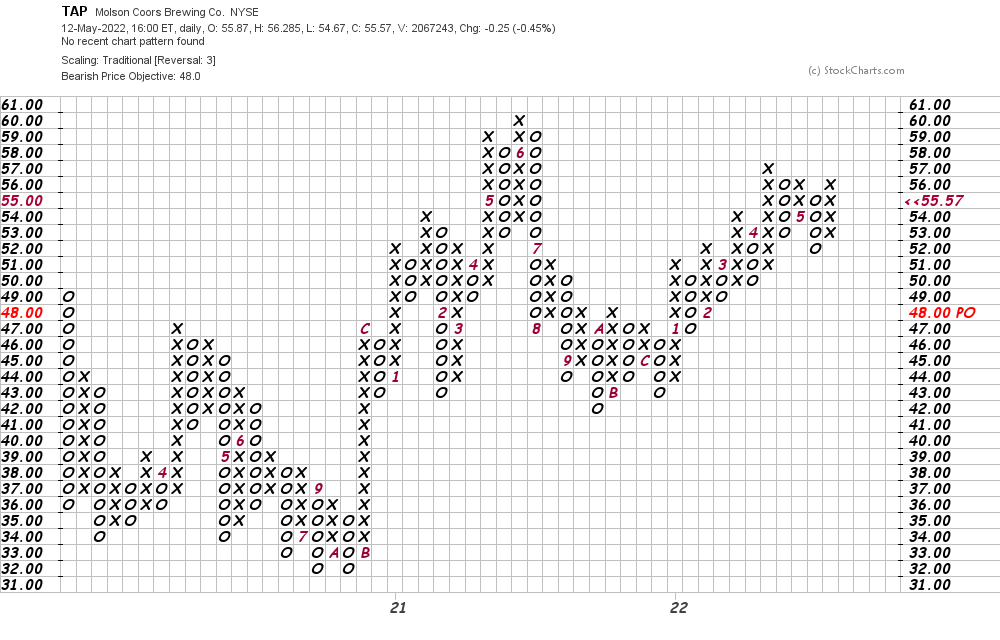 In this weekly Point and Figure chart of TAP, below, we can see an upside price target in the $67 area. 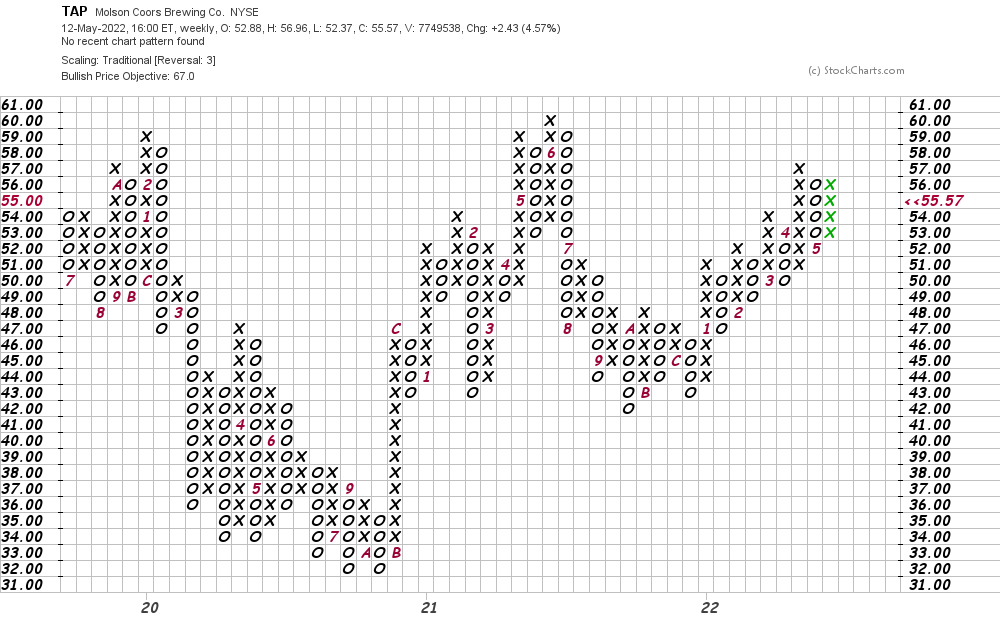 Bottom-line strategy: I have enjoyed a few bottles of Molson over the years but that does not sway me when I look at a chart of TAP. The charts and indicators are just "okay" with a downside price target on the daily Point and Figure chart. In a strong bull market I may say buy but in this environment I am not in a rush to purchase TAP just yet.

Get an email alert each time I write an article for Real Money. Click the "+Follow" next to my byline to this article.
TAGS: Investing | Stocks | Technical Analysis | Beverages | Food & Drink | Mad Money