We heard a lot on Thursday about the Dow Theory -- I even saw several folks say that we had a "Dow Theory Buy Signal."

Let me start by noting the Dow Theory, technically speaking, doesn't really have signals, buy or sell. It was written as a series of editorials by Charles Dow, as an economic theory.

It states that if the industrials are doing well, then the transportation stocks should be doing well too. If one is not confirming the other, then something is amiss in the economy. Over the years I have heard, when the industrials do not confirm the transports, many tell me that with the Internet, transports are not as important. To which I ask: And how do you receive your orders you place over the Internet? It remains important. At least to me it does.

But here's the thing. The transports did not make a higher high on Thursday. They went higher intraday than they did in April, but there's those highs from last October still looming about 5% overhead. Thus, there is still a Dow Theory non-confirmation in place.

As for Thursday's market, I'm sure there are those who thought it traded just hunky-dory. I am not one of them. While the breadth numbers are not solidly red, we now have had three-straight days of red breadth. To put that in perspective, it has been three months since we saw three consecutive days of red breadth. And to have red breadth on a day the S&P 500 is up 8 is simply not bullish. You can see the very minor divergence on the chart of the cumulative advance/decline line. The blue line has gone down, while the brown one, the S&P, has gone up.

The McClellan Summation Index has stopped going up. I would say it has turned down, but it's difficult to see the turn down. It now needs a net differential of positive 600 advancers minus decliners to turn up again. The last time we had positive 600 for the advance/decline line was Monday.

Yet sentiment continues to move into the giddy camp. This week's American Association of Individual Investors saw the bulls move up to 40%, the highest reading since July. 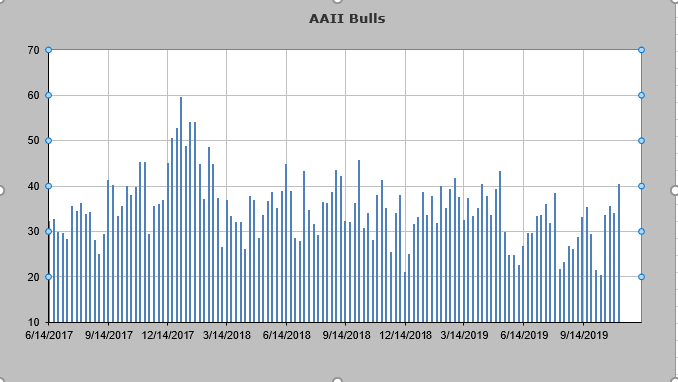 The bears moved down, to the lowest since July. I prefer to use the four week moving average of bears. They are currently where they were in July, but they were lower at the April high. Either way, you cannot say folks are not bullish, can you? 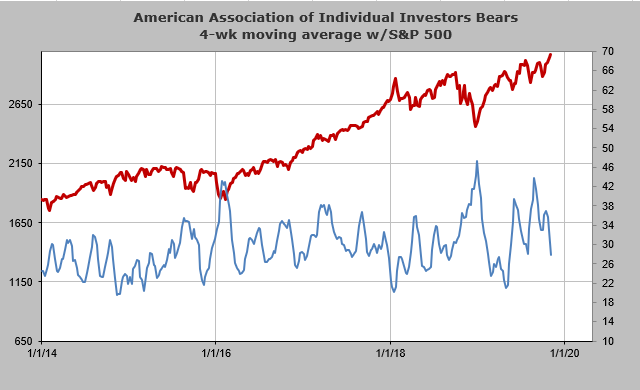 Bausch Health Looks a Little Blurry Ahead of Earnings

Let's check out the charts of this Canada-based company.

Apple Stock: What Matters Most Is What Happens Wednesday

Here's how to play it after the tech giant's coronavirus warning.

These four names provide a way to stay in the game -- from a safe distance -- and grow some green.

Jim Cramer: Know How to Invest Amid Coronavirus, but Don't Forget its Victims

The human cost of the virus is real, so don't overlook that, but also know the companies who are in a position to benefit.