On the surface? Almost nothing. Unfortunately, that's how much of the financial media covered what transpired on Thursday.

Pop the hood, though. Take a look. There is a tale to be told here. Unlike Wednesday, when the broader U.S. equity indices tried to rally only to suffer from a bout of late-day selling pressure, on Thursday stocks generally tried to sell off only to rally into the close.

Though almost flat from one day to the next, one close occurred at the bottom of the day's trading range while the next at the very top of the range. All this on nearly identical trading volume that would be considered less than remarkable relative to levels seen just over the past two weeks. For the most part, growth has been favored over value, but not as law.

Yes, energy stocks were back in vogue as crude oil futures markets traded higher. Away from energy, though, for traders flows moved back toward software. However, allocations earmarked for the Communications Services sector moved toward telecom, not the Internet, a nod perhaps toward expected national spending on 5G infrastructure spending.

Something else I thought to be notable. Though losers beat winners by a narrow margin at both of New York's primary exchanges and the spread between declining volume and advancing down at 11 Wall Street (New York Stock Exchange) did reflect this condition, up at Times Square (Nasdaq Market site) advancing volume beat declining volume by roughly two to one. Does that make Thursday's final hour more significant for the Information Technology sector than it might otherwise going into Friday's "quadruple witching" of expiration events? Food for thought.

Heck, I'm not sure. I do think that I saw something that did not quite fit on Thursday. Opportunity? Could be. One only sees these things if one is paying attention, so let's dig into this complex story.

Equity markets more or less rallied into the close. The media may not have been all that focused on the meeting between U.S. Secretary of State Mike Pompeo and China's top diplomat Yang Jiechi in Hawaii. Pompeo, if one is unaware, is the smartest person in the room, most any time that he is in a room. No politics here. Like him or hate him, this guy is as sharp as a tack.

Now, the official statements as well as comments made around the event from both sides make clear what each side needs to see. China wants the U.S. to stay out of what the Communist Party considers to be their domestic affairs. This refers not only to the goings on in Hong Kong but also the autonomous island of Taiwan. The U.S. side needs Chinese cooperation on all matters involving commercial and national security as well as increased transparency around the Covid-19 pandemic. However, as news started breaking around these meetings, markets in the U.S. started showing life.

Friday morning. Bloomberg News reports that Beijing has asked state-owned agricultural buyers to prioritize meeting the Phase One trade agreement. In plain English, this means that China will likely ramp up purchases of U.S. soybeans, corn and ethanol in order to try to improve relations with the U.S. in hopes that pressure may be relieved elsewhere. Do I know anything? No. Just my opinion, but I have already told you my opinion regarding this Sec of State. He's no fool.

This Is Where It Gets Interesting

It appears that at least for the moment that tensions between the planet's two largest economies are off of their worst levels. I know, the president says and tweets a lot of things. What U.S. Trade Representative Robert Lighthizer says as well as what occurred just after the Pompeo meeting conveys action.

Equity markets may have shown some relief in response to this week's developments in Hawaii, but the Industrials by measure of either the Dow Jones Industrial Average (DJIA) or the Industrial Select Sector SPDR ETF (XLI) did not. The Industrials as a sector finished the day in 10th place, which is second to last. Breaking down the sector by industry groupings, only delivery services and trucking saw green arrows for the day. Defense closed the day at the very bottom. -- 16th out of the 16 industries that comprise the industrials as a sector.

Does that fit? Maybe if the U.S. and China are going to decide to get along better for the time being. Still, there was no mention of the growing tension between the Koreas, or of the skirmishes along the Chinese border with India in the Himalayas. See where I'm going here?

Should tensions on that border worsen, is India ready for China? Readers may not know this, but India's prime minister has been high on a "Made in India" initiative. The fact is that the fighter aircraft in use by the Indian Air Force are comprised largely of outdated "cold war" relics. The Indian Air Force flies a mix of Soviet era MiG-29s and MiG-21s as well the more modern, but not really modern Sukhoi-30s. They also have a few Mirage-2000s (French) and even still have some Jaguar-2000s (developed in 1968) in service.

You'll recall that earlier this week there was a skirmish at that border that was fought without firearms yet still cost each side tens of soldiers, which is incredible. That's basically a giant gang war on top of a mountain. India had recently announced the need to source 114 new fighter aircraft and to do so in country.

In response, this week, the Indian Air Force has proposed acquiring up to 33 additional Russian fighters (Sukhoi-30s and MiG-29s). If you think like me, you're seeing the opportunity apparent for both Lockheed Martin (LMT) as well as Boeing (BA) . Lockheed's F-21, which is really a modernized F-16 with fifth-generation technological add-ons, and Boeing's F/A-18 Hornet could fit the need for a bulk order probably as effectively as could anyone else.

Earlier this week, news broke that NBA players would wear these rings made by Oura, a Finnish firm that manufactures "smart rings" that track body temperature, heart rate, heart rate volatility, and respiratory rate. Also this week, Las Vegas Sands (LVS) (owner of the Venetian and Palazzo resorts) announced the purchase of 1,000 of these rings for their employees. What gives? These rings provide for the wearer a "readiness score" that appears with significant accuracy to warn pre-symptomatic individuals that something is wrong, such as an infection by the virus that causes Covid-19, as many as two or three days prior to that individual actually feeling ill.

If truly accurate, how soon before the Apple (AAPL) Watch or Fitbit (FIT) adapt in order to compete? Is this the key to controlling spread? This may be a key.

I must admit, given the job creation that the Bureau of Labor Statistics had reported for the month of May and the pace of recovery nationwide in Retail Sales also in May, I expected better. Usually nothing really surprises me, not when it comes to economics, but Thursday's seasonally adjusted reports for Initial Jobless Claims as well as for Continuing Claims, while showing improvement, did not show the improvement that I had hoped for. Not only did the numbers miss consensus view, they missed by quite a margin.

The traffic jams are back in New York after a lengthy respite. Is it that so many folks have come back to work, or is it simply that those who have come back are afraid to return to mass transit? Maybe a bit of both.

On that note, and in support of the "reverse square root symbol" recovery that only Danny Blanchflower espoused and now would seem quite obvious to any first-year economics student, The Wall Street Journal reported some startling news on Thursday. Apparently, the number of accounts (student, auto, other debt) that had to enroll in some kind of deferment or forbearance through the end of May from March 1 had now risen to 106 million. This is three times the number of accounts that had reached out for relief as of the end of April. Of the 106 million accounts now seeking relief, 79 million or so are student loans, which is telling. What shape recovery for younger folks, folks yet to build any kind of resume? 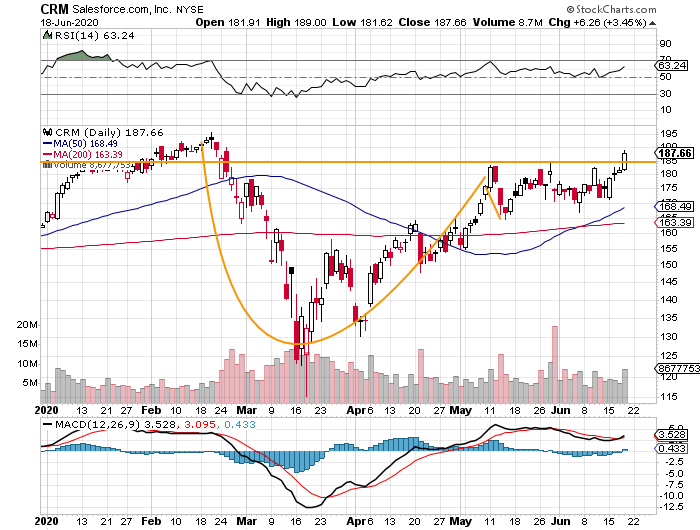 Remember this chart? Salesforce.com (CRM) finally broke through pivot on Thursday, which was the stock's fourth attempt at the level. Price Target: $200. 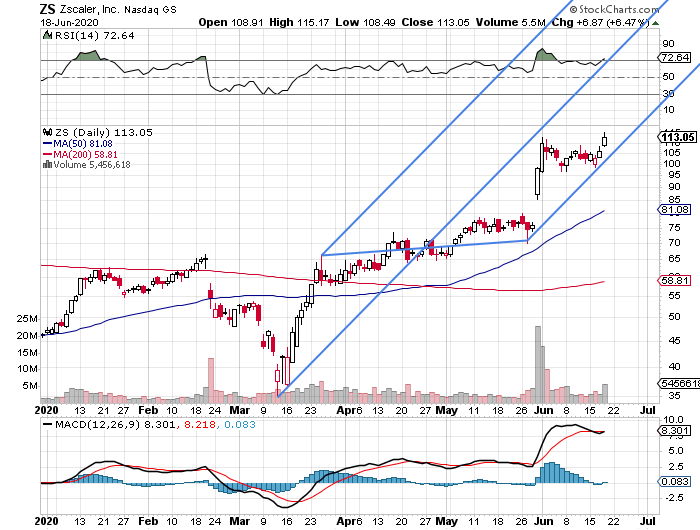 Given the likely unsustainable trajectory of the Pitchfork model created by Zscaler (ZS) since the pandemic bottom, I do think that I am likely to sell a few shares. That in no way means that I think Zscaler stops scaling new heights. That just means I am a trader and I have something to protect going into the weekend. Should the shares sell off just a bit here, there will be an established level of resistance. That potentially could put in play the gap created in late May and never filed, though a long way off at this point.

Get an email alert each time I write an article for Real Money. Click the "+Follow" next to my byline to this article.
TAGS: Distress Indicator | Investing | Markets | Politics | Stocks | Defense | Software & Services | Technology | China | India | Real Money | Coronavirus