A fledgling nation. Forged of both the innocent and as well as the impure. Out of necessity. To stand against empire. They met. Nov. 10, 1775 -- 247 years ago today. Tun Tavern. Philadelphia, Pennsylvania. A committee of the Continental Congress would draft a resolution calling for two battalions of Marines able to fight for independence both at sea and on shore. A Commandant was named. The owner of the tavern was installed as both a captain and as chief recruiter.

By early 1776, these newly formed Marines made their first amphibious assault under fire. The rest, we shall say, is history. Our flag has unfurled to every breeze from dawn to setting sun. In the snow of far-off foreign northern lands and in sunny tropic scenes. In the air, on land and sea. First to fight for right and freedom. They have earned a title held precious across their generations. They are unique. They are United States Marines. Happy Birthday, Devil Dogs. Honor clean.

Investors fled risk assets for the perceived safety of cash on Wednesday. Equities as well as certain hard commodities were exchanged for greenbacks at an accelerated pace as the session wore on. What was it that caused the S&P 500 to easily surrender both its 21-day exponential moving average (EMA) and 50-day simple moving average (SMA), two moving lines that had just been retaken a day earlier... on the third day of a three-day rally? What was it that forced the Nasdaq Composite to retreat from its 21-day EMA as if having been fired from a cannon? What was it that by day's end had left nearly every single equity index that I follow down 2% or more? What was it that left all 11 S&P sector-select SPDR ETFs in the red for the day, with Energy (XLE) down almost 5% and all four "defensive" sectors in the top four slots on the daily performance tables?

What wasn't it? This might be the better question. Many saw the poor performance by the Republican Party in the midterms as a downside catalyst. For many, it was the further collapse of Bitcoin and cryptocurrencies in general as Binance ultimately chose not to rescue FTX. Others thought that perhaps markets were front-running Thursday (this) morning's October CPI data.

That's not all. There were more catalysts -- too many to list without really thinking about it. There was the earnings-related meltdown for The Walt Disney Company (DIS) , there is the rising caseloads of Covid in China, there was the hawkish Fed speak dished out by Richmond's Tom Barkin, and last -- but certainly not least -- there was the truly pitiful auction of $35 billion of 10-Year Notes by the US Treasury Department.

Investors had a bevy of downside catalysts to choose from. The question now is what happens at 08:30 ET when the Bureau of Labor Statistics puts those October CPI numbers to the tape? Consensus appears to be for month-over-month growth of 0.6% at the headline and 0.5% at the core. On a year-over-year basis, which tends to get more focus, the general expectation is for headline growth of 8.0% and core growth of 6.5%. Readers will see below that I am at 8.0% and 6.6% on these metrics. The Cleveland Fed's CPI Nowcast model, which is highly followed up and down Wall Street, for October stands at month-over-month growth of 0.8% and 0.4%, and year-over-year growth of 8.1% and 6.6%. For what it's worth, Cleveland's model does show some headline cooling of inflation month to date for November.

Say It Ain't So

After a review of FTX and that firm's finances on Wednesday, Binance decided to reverse itself and not go through with the "non-binding" offer made earlier. According to "people familiar with the matter," The Wall Street Journal reported that FTX faces a shortfall of as much as $8 billion. FTX has told investors that it hopes to raise $4 billion in equity, though I don't know how realistic that is. Peripherally, Securities and Exchange Commission Chairman Gary Gensler compared broader cryptocurrency markets to the game of building blocks known as "Jenga" that seems to weaken with every failure.

On Wednesday afternoon, the US Treasury Department raffled off $35 billion of 10-year paper. A high yield of 4.14% was awarded, tailing the "when issued' by 3.4 basis points at the time. This was the largest tail for a 10-Year Note auction since at least 2016. Bid to cover landed at 2.23, the lowest for a 10-year auction in more than two years. Indirect bidders (foreign accounts, often central banks) took down a mere 57.5% of the issue, well below the six-month moving average of 64.8% coming in. Direct bidders took down 18.1%, leaving Primary Dealers with 24.4% of the issue, or more than $8.5 billion. Remember, there is no longer a central bank enhanced bid side in this market. These dealers may have a time of it trying to dish these securities out.

It's All About Expectations...

... expectations that seem to be well-anchored, in my opinion. On Wednesday, speaking before the Virginia Chamber of Commerce, Richmond Fed President Tom Barkin said, "The Fed can't let inflation fester and expectations rise. If we back off for fear of a downturn, inflation comes back even stronger and requires even more restraint. That's why the Fed is not waiting around for things to settle on their own time. We know inflation is painful and everyone hates it."

Hmm, well, I guess "fear of a downturn" isn't going to be enough. For those about to ask, Richmond does not vote on policy again until 2024. At least we have that. Also because you were going to ask, at the end of the year St. Louis, Boston, Kansas City and Cleveland all rotate off the committee and Chicago, Philadelphia, Dallas and Minneapolis all rotate on. New York, for the new kids, has a permanent vote and does not rotate.

If the slope of the Treasury yield curve has anything to say about it, Barkin will get his downturn in the not-too-distant future. As happened in October, support has once again come in for the US 10-Year Note. Even now, less than a day since the Treasury took $35 billion of such paper to market at 4.14%, the secondary markets are pricing the US 10-Year at a yield of 4.1%. This has forced the yield spread between that US 10-Year and the US Three-Month T-Bill into an inverted (negative) relationship, which is the most accurate predictor of serious contraction in economic activity that we have. The spread went out on Wednesday about as negative as it has been since February 2020.

Just look at the speed with which this has happened.... 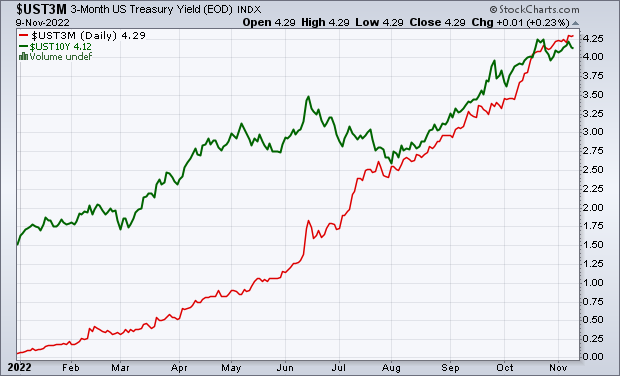 This spread looked downright healthy until late July. Then the two yields ran together, but in positive territory until mid to late October. That's when things got messier. The two lines even kissed in early November only to be sharply repelled as they did.

Right now, fed funds futures trading in Chicago are pricing in a 52% probability for a 50-basis-point rate hike on Dec. 14 and a 48% probability for a 75-basis-point rate hike. Either way, the central bank is going to exert more upward pressure on the short end of the yield curve, while buyers in the secondary market seem to like the sweet spot for the US 10-Year that is the 4.25% to 4.35% range. Unless one or the other of these market dynamics changes, and it's OK if those secondary buyers move out on the yield spectrum just a bit, then the US outlook for growth gets worse, not better. 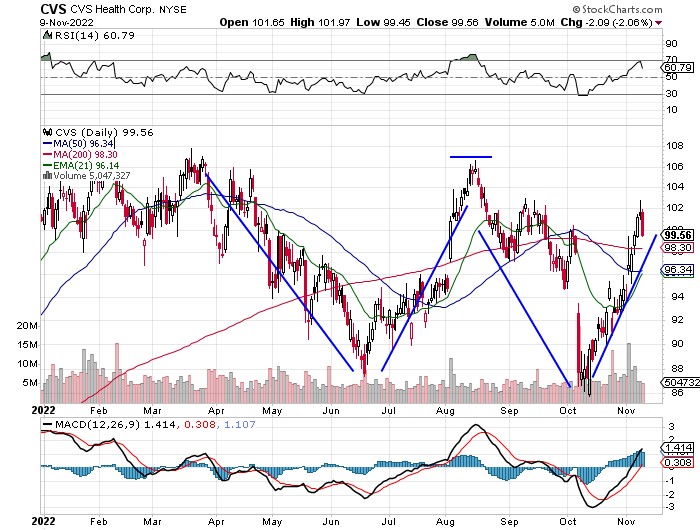 CVS Health (CVS) is coming off a double-bottom formation and is working its way toward a pivot of $107 on improved relative strength and a solid-looking daily moving average convergence divergence (MACD). I am not long this name. I actually sold it lower than this. That was a mistake. 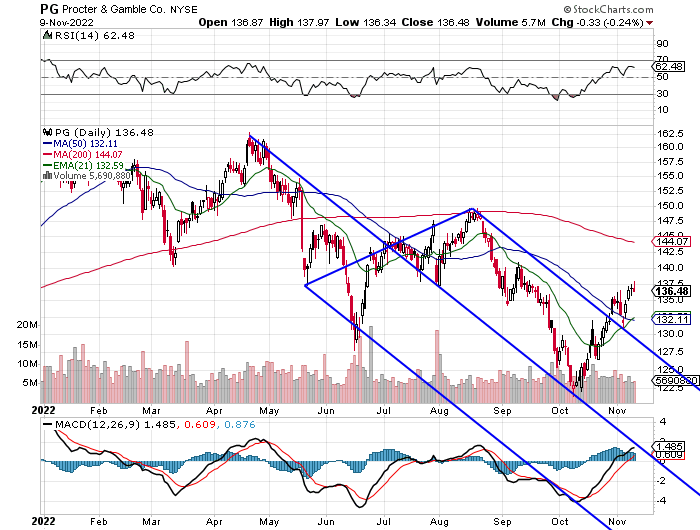 Procter & Gamble (PG) appears to be breaking out of its downward-sloping Pitchfork model and has retaken both its 21-day EMA and 50-day SMA, pulling more portfolio managers on board. Here, relative strength has also improved as has the daily MACD, all while that 21-day EMA crosses over the 50-day SMA in a mini or "swing traders'" golden cross. 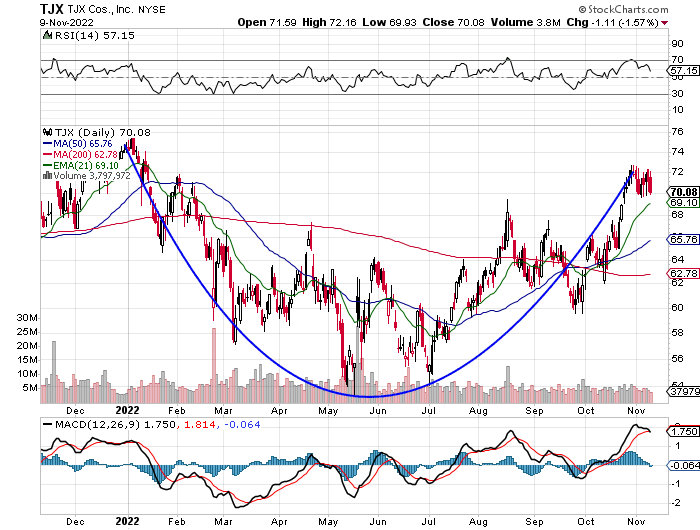 TJX (TJX) reports on Nov. 16, so tread carefully. This stock appears to be completing a cup or perhaps a saucer pattern with a pivot of $77. The stock now seems to be consolidating and building a support base at $70. Relative strength is softening a little as an already extended daily MACD looks like it could roll over here. Should a handle be attached to this pattern, the pivot will move from the left side of the cup/saucer to the right, reducing said pivot to $72 in the process as the handle presents a potential opportunity.