Let's look at sector performance. All eleven S&P 500 sectors traded lower for the session. Those that declined the least? The top four were the REITs, Utilities, Staples (all defensive) and Energy. Energy? What the? Was it not a complete collapse in oil markets that forced this shift in perception upon traders/investors to begin with?

Hmm... We do understand that commodity prices in energy markets are as much about demand as anything else. The dwindling of available storage is merely a symptom of a global/domestic economy that has been turned off. Some U.S. states -- Georgia comes to mind, though there are others -- look to ease back on this shut-down, while we all brace for what headlines might follow this easing of social restrictions in order to allow for some natural transaction to take place. Don't think folks are scared?

You have seen what has happened to the longer end of the U.S. Treasury yield curve this week, have you not? They're scared. Scared that what we now see in oil markets becomes emblematic of an elongated, less-robust economic recovery. Who can blame them? The uncertainty, and there is really nothing but, will lead to the choppiest, most volatile market environment of our lifetimes. This I believe.

Wear a helmet if you have to. But be forewarned. These markets are headline driven. The underlying news is destabilizing enough on its own. Then headlines are written to intentionally draw more attention. To figure out what the bigger money is doing, I do what I always do. Just follow the trail to see what I can see.

Again, I see small-to-mid-caps outperforming large-caps. Large-caps have led this equity market rebound. That implies profit taking. The Information Technology sector finished in last place on Tuesday, led lower by both the semiconductors and software names that have been hot. Profit taking. The Health Care sector also underperformed broader markets on Tuesday, as did big Pharma and the Biotechs within. Again, profit taking.
Trading volume? Lower on Tuesday from Monday, after being lower on Monday from Friday. Does not matter whether you use New York Stock Exchange trading volume or numbers published at the Nasdaq Market Site. It does not matter whether you use the S&P 500 or the Nasdaq Composite. Less shares traded hands.
This tells me that portfolio managers are yet to jump ship on the recent uptrend. In other words, we do not yet have broad distribution. At this point. That does not mean that the bough does not break today, but at least for me, it does mean that the bough has not yet broken. How long can monetary and fiscal authorities try to simulate a $22 trillion economy? What's left of that economy on the other end? These are answers that we just cannot have at the ready, and will not for some time. I just know (actually nobody knows, I simply think) that if we go anywhere north of here, that we will indeed be led there by tech.

Tuesday evening. After negotiations that involved the Trump administration as well as majority and minority leadership from both of our legislative bodies, the U.S. Senate passed a $484 billion bill meant to pad a number of existing programs -- such as the small business "Paycheck Protection Program" that had run out of funding, as well as increase aid to hospitals and health care providers and funding for testing of the virus at the state level.
The bill goes to the House for a vote by Thursday at the latest. We hope. What the small business program will see is another $320 billion in new loans/grants meant to help in keeping payrolls at pre-crisis levels. I know too many folks who have lost their jobs since that money ran out, so fingers crossed. But I don't know. There will also be $75 billion added to the $100 billion already provided for hospitals and providers in last month's Phase 3 fiscal package. There is also an outlay of $25 billion meant for the purchasing and manufacture of tests for this virus, as well as funding to the states to help with the administering of those tests as well as contact tracing.
One thing that is obviously missing from this deal is outright aid to states and municipalities whose budgets have been blown out trying to manage a ground-level response to this health care crisis at the local level. This will now have to be left to a next round of fiscal support. Whether this help comes in the form of Treasury Department support or direct large-scale purchasing of state and municipal debt by the central bank, the monetary base for the medium-term future will simply appear to be a spinning meter, like the one used to measure energy usage on the exterior of a building. There is no other way. Fiscal discipline should have been yesterday's concern and will have to be tomorrow's. It just cannot be today's.

England. Apparently, there are two teams in England working on rapidly developing a vaccine for use in the fight against Covid-19. The British government will provide funding to teams working at both Oxford University as well as Imperial College. The team at Oxford opened recruitment for clinical trials back in March for healthy adults between the ages of 18 and 55, and that team is ready to enter into human trials as early as Thursday (tomorrow). This is the same team that had already expressed their goal of producing one million doses of a vaccine by this September.
Is the speed of progress made by the Oxford team too hopeful? Maybe, but it is just that. Hopeful. Now add this progress being made in England to the work that started in China, the work being done at Moderna ( MRNA) , Inovio Pharma ( INO) or Johnson & Johnson ( JNJ) , among others, and the progress of modern science is undeniable.
There probably will not be comfort across a global or domestic public until there is a belief that when one feels ill, one can make an appointment at their regular doctor's office and be treated, and not think that every time they cough that they either have allergies or five days to live. That said, the sun will come out, again. You will feel joy again. I promise.
The VA (Veterans Administration) released the results of a study on the impacts of the malaria drug Hydroxychloroquine. Needless to say, these results were not encouraging. All eyes now turn in the direction of Gilead's ( GILD) Remdesivir as we await more data regarding that drug's efficacy in treating both mild to moderate cases of Covid-19, as well as severe cases.

I am long both names, so "no skin off my nose", really. You kids notice Atif Malik of Citigroup ( C) , who is about as highly rated an analyst as there is, moved around two of his "Buy" rated semiconductor stocks. On Tuesday morning, Malik moved Marvell Technology ( MRVL) up to number one among his "chip" picks, due to his expectation that as economies emerge, so will demand for 5G networking.
Malik lowered Nvidia ( NVDA) from the top spot to second place, thinking that maybe tailwinds for the name ebb somewhat as the need to work remotely are reduced once economic conditions start to normalize. Hmm. Malik has a $31 price target on MRVL , which also happens to be my price target for that name, just in case readers care about that. Malik has a $315 price target on NVDA. My target for that name is $330. 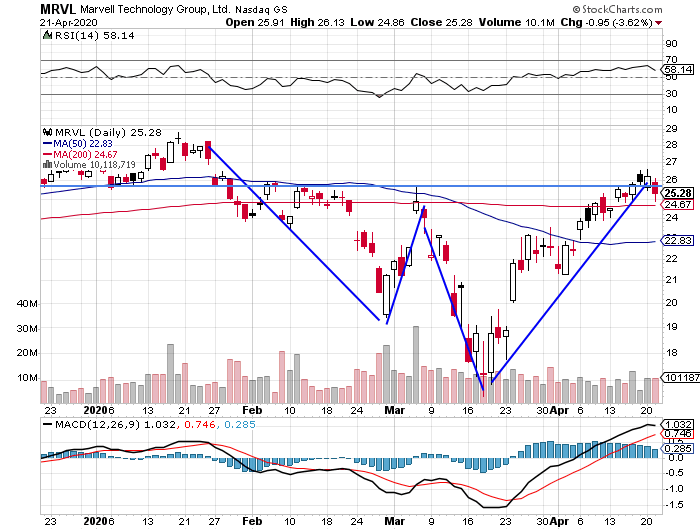 See a "double bottom"? Not quite? I do. Bottoms do not have to be equal for the pattern to exist. This double bottom puts the pivot just below $26 (more like $25.75), meaning that these shares have tried to break out at pivot over the past three days and have met resistance. Where do I panic, should this breakout not happen? The plan, and we all know that everyone has a plan... until something actually happens, is to sell a portion at $24 and buy it back at the 50-day simple moving average (currently $22.83). We'll see.

The level of courage that it would take for a healthy 18-to-55 year old to enlist in the human trials for the earliest stages of clinical trials for a vaccine such as the one at Oxford. Not only are they going to try an unproven vaccine on you, but then they have to try to give you this terrible disease. I know that I'm not that brave.

Get an email alert each time I write an article for Real Money. Click the "+Follow" next to my byline to this article.
TAGS: Economy | Indexes | Investing | Markets | Stocks | Technical Analysis | Trading | U.S. Equity | Global Equity | Coronavirus