Amazon (AMZN) is still atop the table in terms of cloud customers, but judging by Microsoft's (MSFT) gangbusters gains with Azure in recent years, it could have a competent contender.

Shares of Microsoft have shifted upwards on Friday, encouraged by a blockbuster beat on top and bottom lines in its earnings release and continued - although tempered - growth in cloud infrastructure.

"Customer commitment to our cloud platform continues to grow," CFO Amy Hood pointed out. "In FY19, we closed a record number of multi-million dollar commercial cloud agreements, with material growth in the number of $10 million plus Azure agreements. Commercial bookings growth was significantly ahead of expectations, increasing 22% and 25% in constant currency, driven by strong renewal execution and an increase in the number of larger, long-term Azure contracts."

She added that Azure revenue increased 68% year over year, marking a significantly faster growth rate than some of its peers. While it does come from a lower base of revenue than Amazon and its pace does appear to be paring down, the still stunning rate is encouraging for overall market share among larger clients. 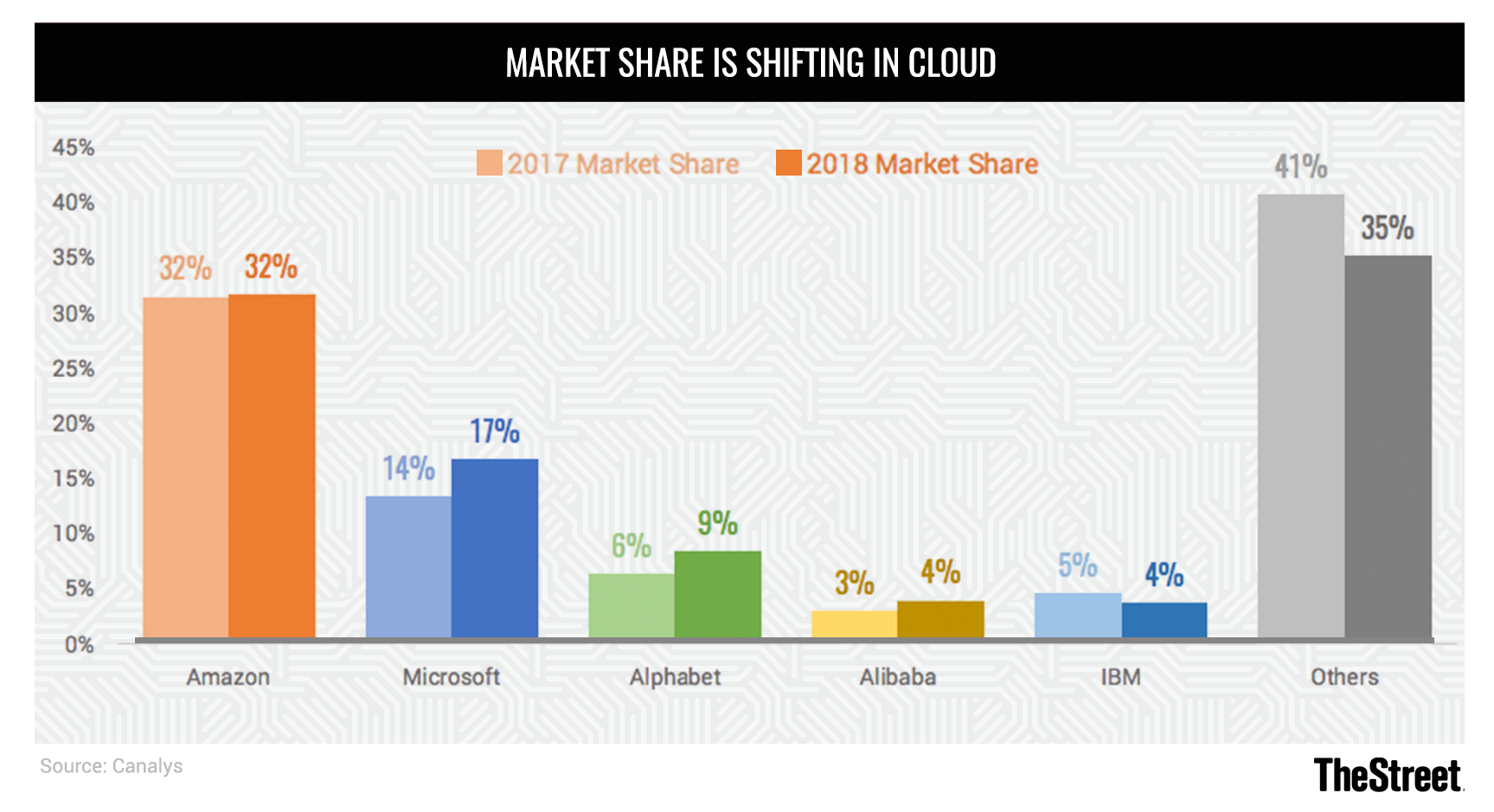 While Alphabet (GOOGL) and Amazon have yet to report their second quarter results, the overall revenue growth of Azure remains among the industry's best given a revenue base nearly twice the size of Google Cloud and continues to gain on Amazon.

"We think Azure growth will be in the mid-50% range y/y CC range in FY20, due to a larger revenue base and tough comps," BMO Capital Markets analyst Keith Bachman noted. "We believe that Azure remains well positioned due to higher consumption of premium services and new customer adds. We note that Azure is growing much faster than AWS at similar quarterly revenue levels." 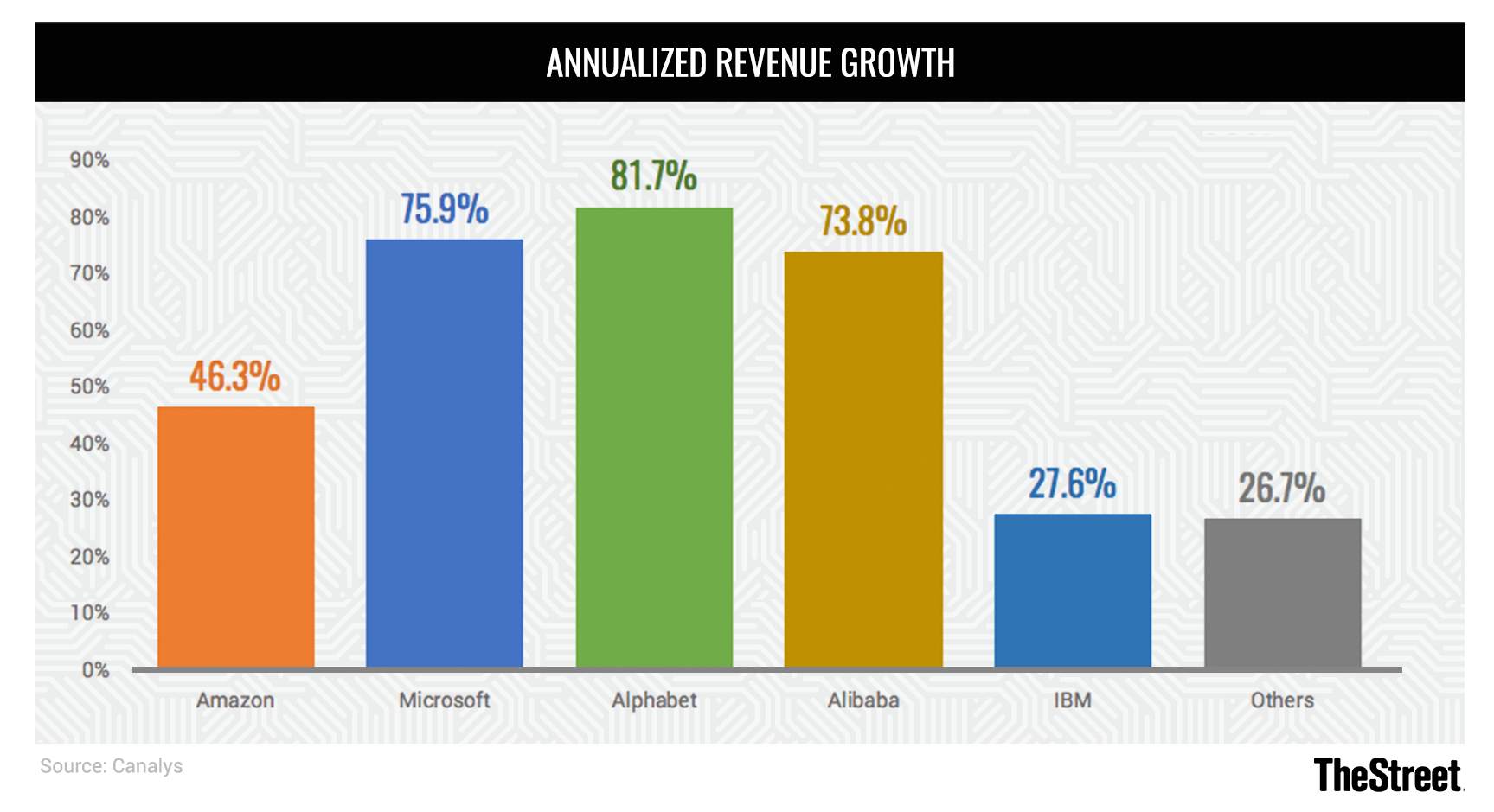 "Azure is the most open cloud, and in this quarter, we expanded our partnerships with Oracle (ORCL) , Red Hat (RH) , and VMware (VMW) , to make the technologies and tools customers already have first class on Azure," CEO Satya Nadella added, highlighting the high profile customer wins for the product. "Just yesterday AT&T (T) chose our cloud in one of the largest cloud commitments to date."

This agreement alone is rumored to be worth about $2 billion.

Given the secular trends, analysts have joined in the adulation, touting valuations on Amazon well north of $1 trillion based on the booming cloud business.

"Microsoft enjoys a broad portfolio of strategic products, sits at the intersection of digital transformations and cloud adoption, and CIOs view it as the most critical and indispensable IT mega-vendor," J.P. Morgan analyst Mark Murphy stated. "While MSFT shares are valued at a premium on a PE basis, we believe this premium is warranted based upon faster recent organic revenue growth, a relatively stronger position within the enterprise, and our belief that Microsoft has pulled ahead of the pack with a state-of-the-art cloud platform."

The state-of-the-art nature of its cloud services hinge on its hybrid capabilities, which essentially means that the cloud can be accessed both on-premises and accessed through public cloud resources and tweaked as needed. The focus on hybrid cloud separates it from Amazon's long-held focus on public cloud infrastructure. In the view of many analysts, the nature of the Azure cloud makes it more essential to corporate IT spend.

"Ultimately, Microsoft remains the best positioned name in tech for the emerging Hybrid Cloud architecture, with improving margins sustaining a durable mid-teens total return profile," Morgan Stanley analyst Keith Weiss said. "We are taking our MSFT price target to $155, based on a 27X multiple - a premium to the broader market."

Get an email alert each time I write an article for Real Money. Click the "+Follow" next to my byline to this article.
TAGS: Earnings | Investing | Markets | Stocks | Software & Services | Technology | Analyst Actions | U.S. Equity | Stock of the Day