Microsoft Corp. (MSFT) is the Stock of the Day at Real Money Thursday after its board approved a $40 billion stock buyback plan and increased the quarterly dividend by 11%. The stock, which is a holding of Jim Cramer's Action Alerts PLUS charitable trust, is up a bit on the news. Let's check out the charts.

In this daily bar chart of MSFT, below, we can see two trends. First is the uptrend from late December to late July. The second trend starts in June as prices turn sideways and form a possible triangle formation. MSFT has crossed back and forth around the flattening 50-day moving average line since early August. The 200-day simple moving average line has a positive slope and was last tested back in late January and early February. MSFT does not look extended versus the 200-day line.

The On-Balance-Volume (OBV) line has moved up with the price action and turned flat in late July, telling us that buyers and sellers of MSFT were in balance. The Moving Average Convergence Divergence (MACD) oscillator has been hugging the zero line recently, which is another display of the balanced price action.

In this weekly bar chart of MSFT, below, we can see that a long position in MSFT the past three years has been rewarding. Prices have stayed above the rising 40-week moving average line except for a few months in late 2018. The weekly OBV line is bullish, but I would like to see it make a new high soon. The MACD oscillator crossed to the downside in July for a take profits sell signal. 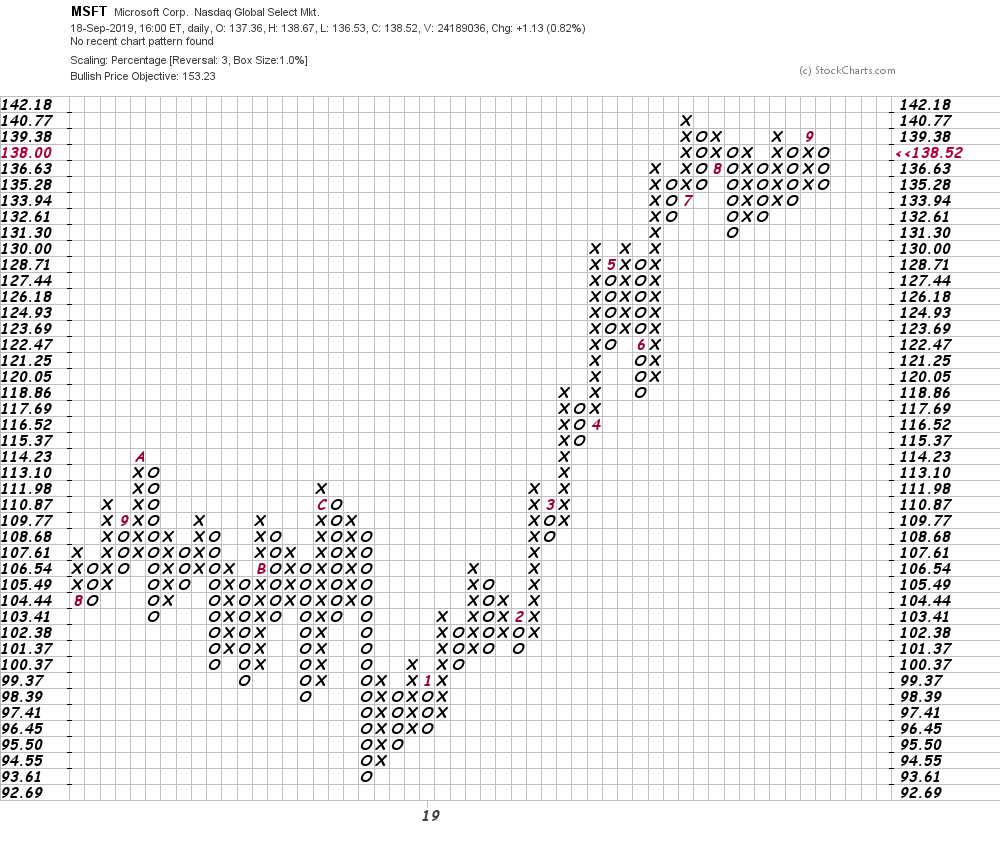 Bottom line strategy: Investors and traders should operate from the long side above $140. The $155 area is the first price target. Risk a close below $131.

Get an email alert each time I write an article for Real Money. Click the "+Follow" next to my byline to this article.
TAGS: Dividends | Investing | Stocks | Technical Analysis | Software & Services | Technology | Technology Hardware & Equipment | Real Money | Stock of the Day

How to Navigate a Market Correction in 7 Steps

They include not focusing on predicting an exact low and watching for failed bounces.

The result has been a technical breakdown in risk-asset pricing -- and the main culprit is without a doubt, the inability of Congress to compromise.

Time to Check Out Ebix

The Emotional Highs, Lows and Jitters of the Market

We're not in full-fledged panic, but I think we might call it another giant step away from complacency and toward concern.