Micron Technology Inc. (MU) is indicated higher Thursday morning before the opening bell. Traders and investors seem to be reacting to earnings numbers Wednesday evening. The headline I see this morning is that quarterly numbers "beat" expectations and the company's fiscal year 2019 outlook has capex reduced to about $9 billion from the prior $9 billion to $9.5 billion range. "Micron expects to keep using at least 50% of FCF on an annual basis for share repurchases." I passed the Series 86 exam years ago but I will stick with the charts and indicators.

In the daily bar chart of MU, below, we can see the price action through Wednesday's close. MU was in a downtrend from June to late December. The downtrend is not the problem but rather that prices started to weaken well before the general market. I don't mind bullish leadership on the upside but when a stock leads the broad market on the downside it is a strong signal that something is wrong.

While MU has recovered a bit in the past three months, volume has not expanded on the advance, which suggests that bulls have not returned at these levels. Yes, MU is above the rising 50-day moving average line but it is still below the declining 200-day line. The daily On-Balance-Volume (OBV) line shows a drift lower from June to late December and only a very slight improvement since the December nadir.

The Moving Average Convergence Divergence (MACD) oscillator has spent most of the past twelve months below the zero line in bearish territory.

In the weekly bar chart of MU, below, we can see a long advance from 2016. A big decline in 2018 and a rally in recent months that has so far stopped at the underside of the declining 40-week moving average line.

The weekly OBV line is still in a decline from early 2018 telling us that sellers have been more aggressive. The weekly MACD oscillator gave a cover shorts buy signal in January but the two moving averages are narrowing and could cross to the downside in the weeks ahead.

In this Point and Figure chart of MU, below, we can see that prices met a bearish price target this month. A rally to $42.65 is probably needed to improve this chart. 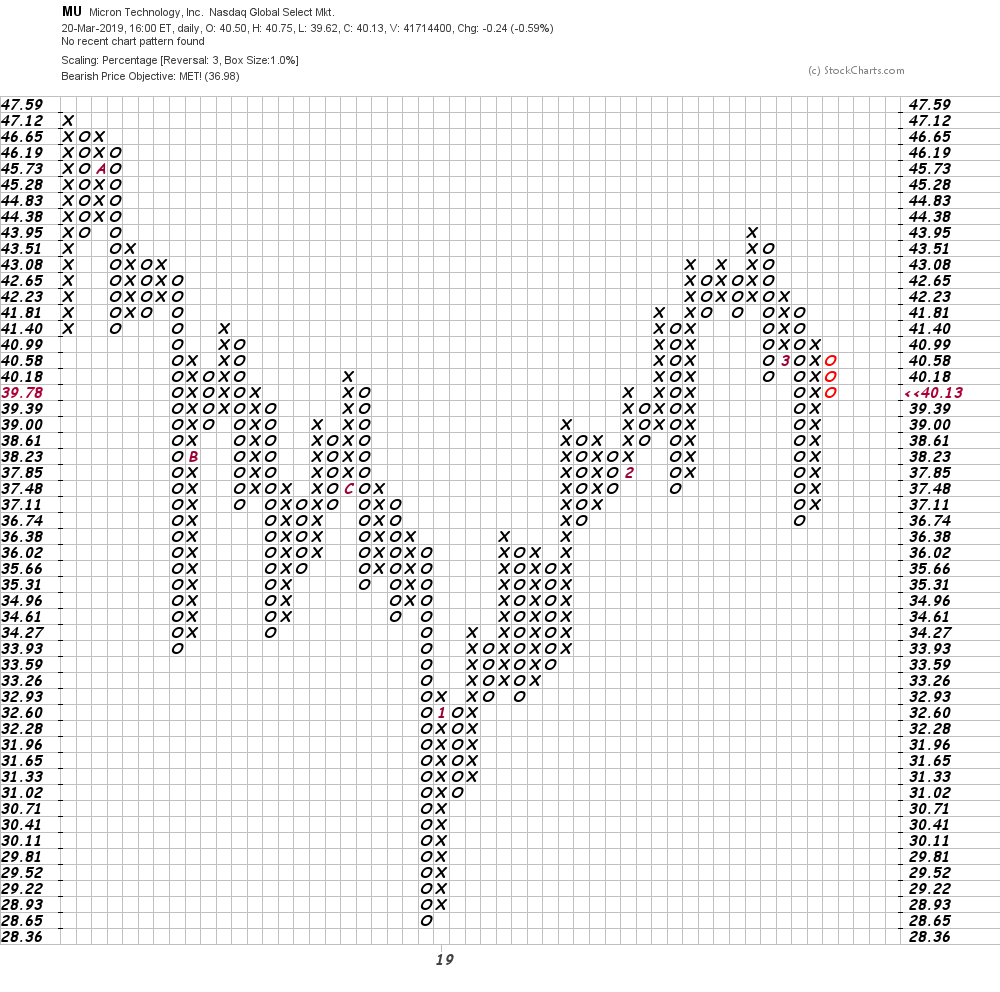 Bottom-line strategy: MU could rally today but it will probably do very little to really improve the technical picture. MU needs more sideways price movement or base building before it looks capable of a sustained advance.

Get an email alert each time I write an article for Real Money. Click the "+Follow" next to my byline to this article.
TAGS: Earnings | Investing | Stocks | Technical Analysis | Semiconductors & Semiconductor Equipment | Software & Services | Technology | Stock of the Day