By STEPHEN GUILFOYLE Mar 30, 2022 | 11:42 AM EDT
Stocks quotes in this article: MU, NVDA, AMD, MRVL
On Tuesday evening, memory chipmaker Micron Technology ( MU) released its fiscal second-quarter financial results.
Micron posted GAAP net income of $2.26B, or earnings of $2.00 per share, and adjusted net income of $2.44B, good for adjusted EPS of $2.14 on revenue of $7.786B. The sales number was good for year-over-year growth of 24.8%, while both top and bottom-line results easily beat Wall Street expectations.
While operating cash flow of $3.63B was lower sequentially, it was enough for 18.6% growth from the year-earlier comparable period. Gross margin (GAAP) came in at 47.2%, up from 46.4% three months ago and widening from 26.4% one year ago.

According to Chief Business Officer and interim CFO Sumit Sadana, who spoke on last night's call, "Revenue was particularly strong in client and cloud markets."
DRAM revenue added up to $5.7B, or about 73% of the entire Micron revenue pie. This was good for 2% sequential growth and 29% y/y growth.
NAND revenue came to $2B, or 25% of the revenue pie. This amounted to 4% sequential and 19% annual growth.
Breaking things down further by business units:
Compute and Networking sales were up 31% to $3.5B.
Mobile was down 4% to $1.9B.
Storage was up 38% to $1.2B.

As of March 3, Micron's net cash position had grown to $10.122B from $9.58B three months ago. This and some growth in inventories took current assets up similarly to $21.502B. Current liabilities are up small to $6.918B on some growth in accounts payable, which likely has something to do with the already mentioned inventory growth.
This brings the company's current ratio to a very healthy 3.11. Micron ended the quarter with total assets of $63.696B on the books, which seriously outweighs total liabilities less equity of just $15.851B. The company has hardly any current debt ($123M), and long-term debt of $6.918B, which could be paid out of pocket if necessary.
This balance sheet is as clean as a whistle and gets high marks on the Sarge test.

For the fiscal third (current) quarter, Micron expects to drive sales of $8.5B to $8.9B, which is well above the $8.1B that Wall Street was looking for.
The company sees adjusted EPS landing in a range spanning from $2.36 to $2.56 versus the $2.21 that Wall Street had in mind. Gross margin is expected to end up around 47%, or 48% adjusted.

I was able to find six sell-side analysts who have opined on Micron since these earnings were released and are also rated at five stars by TipRanks. Of the six, there are five "buy" of "buy equivalent" ratings and one "equalweight" which I consider to be "hold equivalent."
There were a number of price target increases made overnight, even from the "hold" in the mix. The average price target of these six is $122.33 with a high of $165 (Hans Mosesmann of Rosenblatt Securities) and a low of $83 (Joseph Moore of Morgan Stanley, who is the "hold").
While many of the notes mentioned things such as improving prospects for the data center, PC and automotive businesses, a common theme also seemed to be Micron's pricing power.

First up, I am long Micron, so my view might be biased. I am long a basket of semiconductor names that also includes Nvidia ( NVDA)  Advanced Micro Devices ( AMD) and Marvell Technology ( MRVL) , but Micron is (currently) my lone exposure to memory.
MU stock trades at 8 times forward-looking earnings, and I do believe that demand for what Micron does will outpace supply and/or capacity for some time. That said, Micron seems to always trade at single-digit multiples so it is not necessarily "cheap" here, but the stock is certainly not (opinion) expensive. 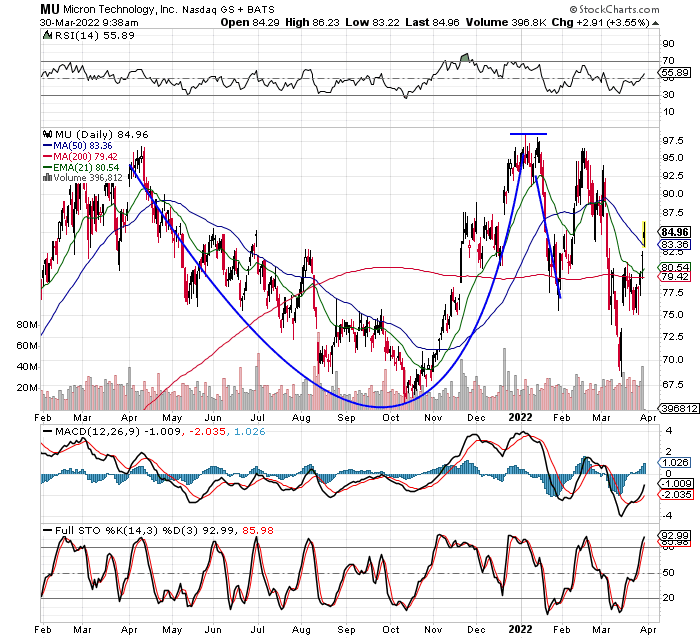 I believe that I may have shown you the above cup-with-handle pattern several months ago when it was still developing. Readers can see that the attempt to break out past the $98 pivot failed in February. Now, let us zoom in on the present: 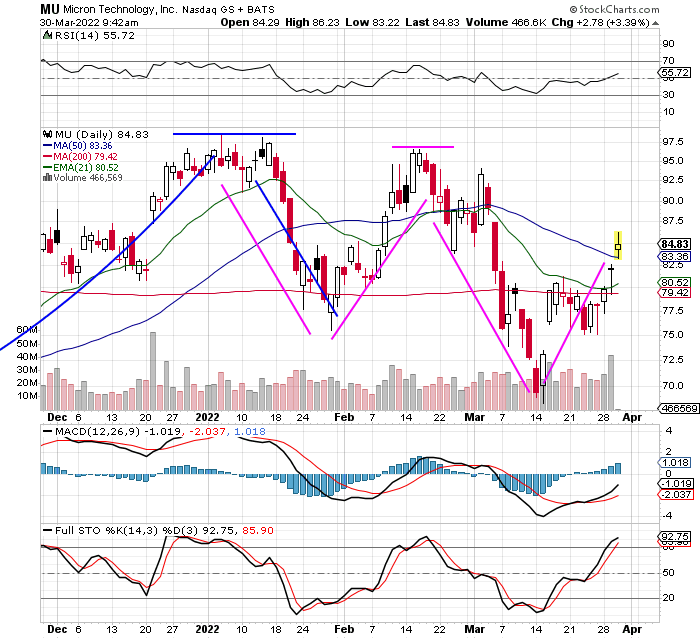 Suddenly, or maybe not so suddenly, that failure has turned into a double bottom (reversal?) with a $96 pivot. The stock has opened higher on Wednesday, and has retaken its 200-day simple moving average (SMA), 21-day exponential moving average (EMA) and 50-day SMA in that order. That puts portfolio managers in "chase" mode, which you are witnessing right now.
While the Full Stochastics Oscillator hints at the stock being short-term overbought, both Relative Strength and the daily Moving Average Convergence Divergence (MACD) say it could still have a long way to go.

Price Target: $115
Pivot: $96
Add: $80 (21-day EMA)
Panic: $78 (break of 200-day SMA)
(NVDA, AMD and MRVL are holdings in the Action Alerts PLUS member club . Want to be alerted before AAP buys or sells these stocks? Learn more now. )
Get an email alert each time I write an article for Real Money. Click the "+Follow" next to my byline to this article.
TAGS: Earnings | Investing | Stocks | Technical Analysis | Trading | Semiconductors & Semiconductor Equipment | U.S. Equity