By STEPHEN GUILFOYLE Sep 30, 2022 | 11:23 AM EDT
Stocks quotes in this article: MU
I have always felt that playing Micron Technology  ( MU)  into earnings has been a dangerous game. Well, that is at least since the first time I got caught on the wrong side of one of some forward-looking guidance. That said, the semiconductors have been pounded, memory has been pounded and I came in flat this name.
Micron Technology released fiscal fourth-quarter financial results. The results really were not so lousy, relative to expectations, not year-ago comps. The guidance though? We'll get to that.
For the three-month period ended Sept. 1, Micron posted adjusted earnings per share of $1.45 (unadjusted EPS landed at $1.35) on revenue of $6.643 billion. Bottom line performance beat the Wall Street. But not only did the top line fall short of consensus, the print showed a year-over-year contraction of 19.7%. GAAP net income landed at $1.492 billion, down from $2.72 billion (-45.2%) for the year-ago period.
Digging in, adjusted gross margin printed at 40.3%, down from 47.7% for the previous quarter and down from 47.9% for the year-ago comp. Think that's bad? Check this out ... adjusted operating gross margin hit the tape at 25%, down from 36.4% for the previous quarter, and down from 37.1% for the year-ago comp. Operating cash flow of $3.78 billion, however, dropped less severely from $3.84 billion a quarter ago, and $3.88 billion a year ago.

NAND-driven revenue amounted to $1.7 billion, representing 25% of the firm's total generation of revenue for the period. NAND sales were down 26% quarter-over-quarter and down 14% year-over-year.  DRAM revenue printed at $4.8 billion. DRAM drove 72% of the firm's total revenue for the three months, while DRAM sales decreased 23% quarter-over-quarter and 21% year-over-year.
DRAM vs. NAND: Those who know the difference or don't care can move ahead. For the rest of you, DRAM (Dynamic Random Access Memory) is about 100 times faster than NAND and lasts 1,000 times longer. DRAM is used for temporary storage on servers and mobile devices, but is more volatile and only works as long as it has access to power. NAND (flash) is non-volatile, and can save data even when removed from power, hence is useful for permanent storage.

Though the fourth-quarter was a little rough around the edges, this is where it gets ugly....
For the fiscal first quarter -- the current one -- the firm sees revenue of $4 billion to $4.5 billion, which is well below the $5.65 billion that Wall Street had in mind. The firm sees adjusted gross margin of 24% to 28%, down from 40.3% this past quarter. The firm expects adjusted operating expenses to print close to $1B. Micon also sees adjusted EPS at $-0.06 to $0.14. Wall Street was looking for something around $0.65.

The company's technology and manufacturing leadership for DRAM and NAND, customer relationships, portfolio, and balance sheet put Micron on solid footing, said Micron President and CEO Sanjay Mehrotra. This will help the company "navigate the weakened near-term supply-demand environment," Mehrotra added.
"We are taking decisive steps to reduce our supply growth including a nearly 50% wafer fab equipment capex cut versus last year, and we expect to emerge from this downcycle well positioned to capitalize on the long-term demand for memory and storage."

Micron ended the quarter with a net cash position of $9.331 billion. Inventories printed at $6.663 billion, which was up 18.4% over three months and up 48.5% over 12. This puts current assets at $21.781 billion. Current liabilities total just $7.539 billion, which is primarily accounts payable.  Micron's current ratio comes to 2.89, which is exceptional.
Even omitting the bloated level entry for inventories, the firm's quick ratio prints at 2.01. Mehrotra was not wrong about the balance sheet, even if inventory levels are a problem.
Total assets add up to $66.283 billion, including just $1.649 billion in "goodwill" and other intangibles, which is literally nothing. Total liabilities less equity amounts to $16.376 billion, including $6.803 billion in long-term debt. Not only can this balance sheet withstand anything the firm has to do regarding inventory levels, the firm could also pay off its debt-load out of pocket at the same time. This is a top-shelf balance sheet.

Since these earnings were released last night, I have noticed seven sell-side analysts that have opined on Micron -- and all are rated at five stars by TipRanks. The opinions really are split. After allowing for changes to be made, I count three "Buy" or buy-equivalent ratings, three "Hold" or hold-equivalent ratings, and one "Underweight" rating, which is considered to be sell-equivalent. The average target price of the seven is $61.29, with a high of $100 (Hans Mosesmann of Rosenblatt Securities) and a low of $45 (Harsh Kumar of Piper Sandler). Omitting the high and the low as outliers (and I think that high really is out of line with the rest of the group), the average of the other five drops to $56.80.

What's really to say? You have a firm acknowledging that they are currently seeing lower demand, while carrying massive inventories. That's certainly not optimal and will take some time to work out. The firm has continued to buy back shares. During the quarter reported, Micron repurchased 13.2 million shares for $784 million. The company remains committed to returning 100% of free cash flow over time to shareholder returns. The bulls do have that.
In all honesty, I appreciate a well built balance sheet and it is difficult for me not to get long a name when I see a balance sheet like that. That said, there is obviously a good reason for that 6-times forward looking earnings valuation and I think we have just explained it. I just saw Mehrotra on TV. He did not sound nearly as enthusiastic as I have heard him in the past.
The stock is trading up a bit this morning. That may be related to separate news this morning that Micron will receive up to $322 million from Japan to produce memory chips at a facility in Hiroshima. Even so, I do not think I can bless buying this stock on strength at this time. 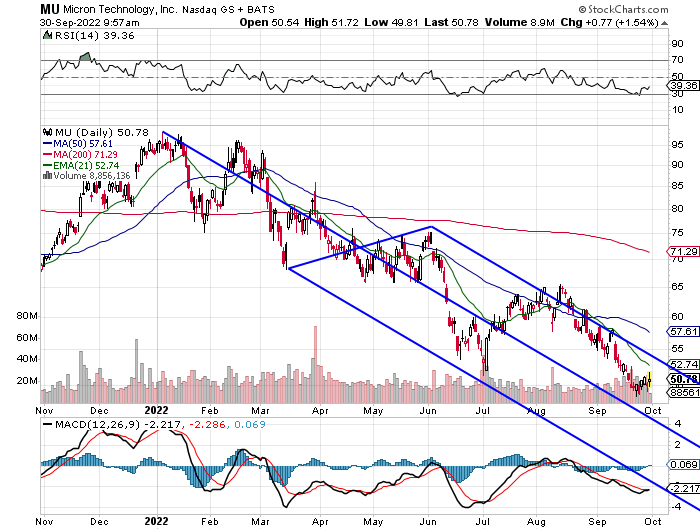 The stock remains stuck in the same downtrend that the semiconductor industry and  the market more broadly are stuck in. All three of our most focused upon moving averages are moving lower. Many portfolio managers will not even dip their toes in the water until at least one of those averages heads north.
I think I need to see the central trendline of my Pitchfork model tested in order to consider any kind of portfolio initiation. That probably means the $45 level or cheaper. If that sounds interesting the $45 MU Nov. 18 puts are paying about $1.65 this morning. If that's cutting it too close to the last sale the $40 November 18th puts are trading at a rough $0.72.
Get an email alert each time I write an article for Real Money. Click the "+Follow" next to my byline to this article.
TAGS: Earnings | Investing | Stocks | Semiconductors & Semiconductor Equipment | Technology