"Trying to bottom" and "bottoming" are just different ways of saying the same thing. They imply a stock has characteristics often seen when a stock has the potential to stop dropping, whereas, "bottomed" implies the near-term low is in place with a likelihood of upside now in play. It appears Micron Technology (MU) is the former rather than the latter.

The stock is trying to make a bottom in the low $40s after the post-earnings disappointment, but it appears premature to say a bottom is in place. The price action doesn't have a tell-tale long drop with an intraday or intra-week reversal often called a wick. 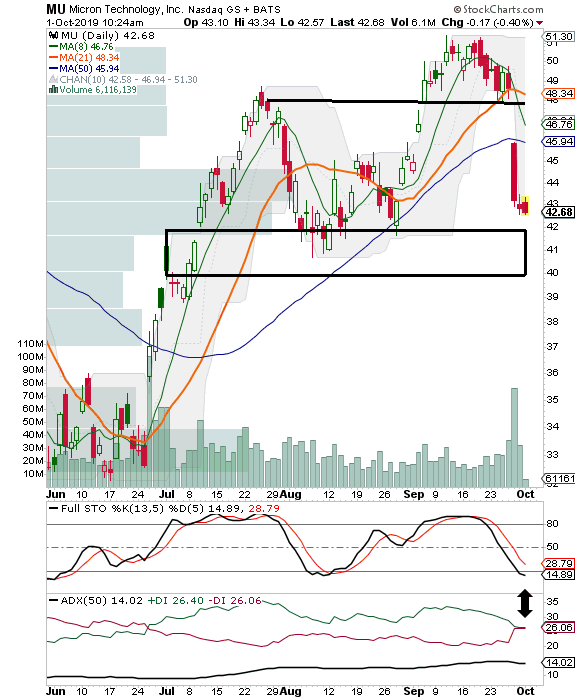 In terms of secondary indicators, I'm seeing somewhat conflicting signals. The long term ADX line has converged with a potential bearish cross. Micron shares struggled earlier this year when we saw that occur. On the flip side, the Full Stochastics indicator has reached oversold. I do love buying a stock when we see a bullish crossover from oversold territory in the Full Stochastics; however, this hasn't even begun to turn higher yet. It could be days or weeks before that occurs.

Put all of this together and you have a stock trying to bottom, but nothing, not a single thing, indicates it has bottomed. I continue to look for Micron to trade into the $40 to $42. If $42 does hold as a floor, then a trader can either look for the triggers in the secondary indicators or watch for that $43.50 area, which has acted as resistance, to be broken on an upside move. From there, a target of the 50-day simple moving average would be my first expectation. If bulls can push above that SMA, then a gap fill to $48 is in play.

There's been no new news to speak of since Sept. 27, so I'd give my write-up from that day on the business a quick read and pair it with the current technical overview to determine how you see the stock playing out.

From my seat, I'll continue to be patient as we wait for the bottoming process to shift to a "bottomed" one.

Get Ready to Test, and Retest, Your Patience

Why should we see a retest a week or two later this time around, when we haven't any of the other times in history?

As crisis turns into one of mental health as well as physical health, some firms are experimenting with use of LSD and 'magic mushroom' compounds.

Amid the Crisis, Listen to Price for Guidance

It is extremely important to stay focused on price action rather than letting personal desires drive decisions.

Think Zoom Video Has Become Overvalued? Me Too

This is a little bit of a 'look what we are all using,' without much of a 'what's their business model?'