By STEPHEN GUILFOYLE Sep 29, 2021 | 11:08 AM EDT
Stocks quotes in this article: MU, AAPL
Memory chip giant Micron Technology ( MU) reported its fiscal fourth quarter results on Tuesday evening and it was a mixture of "fire and ice."
The company posted adjusted earnings of $2.42 per share, and GAAP EPS of $2.39, comfortably beating Wall Street estimate either way. Micron also generated $8.27B in revenue over the three-month period, good for annual growth of 36.5%, and also a nice beat. By the way, this was Micron's third consecutive quarter putting together year-over-year sales growth of greater than 30%.
Pretty hot? If you think so, the following batch of performance based metrics will knock your socks off.
Operating income increased to $3.07B, up from $1.3B a year earlier This came on an operating margin of 37.1%, up from 21.5% last year and on gross margin of 47.9%, up from 34.9% for the year-ago period.
Scorching hot. There's more.
Attributable net income printed at $2.78B, up from $1.23B and operating cash flow hit the tape at $3.89B, up from $2.3B. Can't make numbers like this up. If you were, you would try to make them look more realistic.

Unfortunately, the heat stops right there.
Micron guided current quarter financial performance well below Wall Street's consensus view. The company took it's revenue projection to $7.45B to $7.85B. The midpoint of this range is nearly a full billion dollars below the consensus $8.6B. As far as profitability is concerned, Micron guides fiscal first quarter EPS to $2.00 to $2.20, well below the $2.53 average of the 24 analysts I see that cover the name.
Micron CEO Sanjay Mehrotra makes clear that the issue is not one born of demand, but more an issue of the company's clients having trouble finding necessary components to finish their products. Micron makes DRAM chips for personal computers and data centers as well as NAND chips for many end users including Apple ( AAPL) for use in iPhones and iPads.
Mehrotra, from prepared remarks, said, "Some PC customers are adjusting their memory and storage purchases due to shortages of non-memory components that are needed to complete PC builds." Mehrotra added, "We expect this adjustment for our PC customers to be largely resolved in the coming months. we're also seeing constraints within our supply chain for certain IC (integrated circuit) components." This could limit big shipments in the near-term future.
Positive? One, Micron did not offer guidance beyond the current quarter. Two, Micron is set to pay a $0.10 dividend, its first dividend payment in 25 years, on Oct. 18 to shareholders of record on Oct. 1.

Micron has an indisputably strong balance sheet.
Cash and short-term investments are up small over the past year. Inventories are lower, which is explainable. There is no over-reliance upon goodwill.
Current assets dwarf current liabilities and total assets dwarf total liabilities less equity. In fact, Micron could, if it wanted to, pay off its entire long-term debt load out of its cash position and leave more than $1B in that position.
The company runs with current and quick ratios that are multiples of what I would need to see, to declare for myself a state of good health.

I see that 11 analysts rated at five stars by TipRanks have opined on the name since Micron released these earnings. After a number of price target reductions, we are left with nine "buy" ratings or their firm's equivalent, and we have two "hold" ratings.
The average price target of these 11 is $102.91, with a high of $165 (Hans Mosesmann of Rosenblatt Securities), which is $35 above the second highest target, and a low of $70 (Harsh Kumar of Piper Sandler), which is $15 below the second lowest target. Omitting these two outliers, the average target of the other nine analysts is $99.67.

Readers will first note the near perfect 50% retracement of the stock's August 2020 through April 2021 rally, establishing potential support that has already held its ground for more than two months.
Now, we'll zoom in a little. 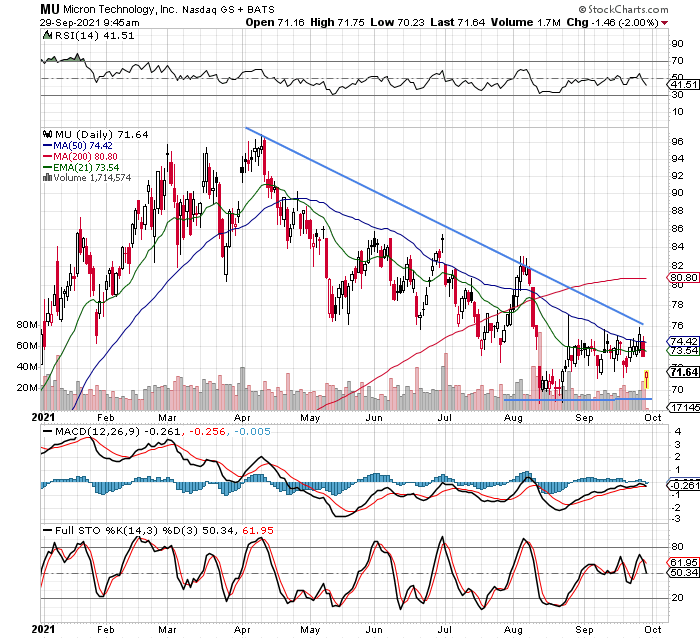 The downward trend has been turned into a late-forming descending triangle, which can be bearish. However, Wednesday morning's pressure has managed to reset both Relative Strength, as well as the FSO (Full Stochastics Oscillator). My feeling is that the gap created on Wednesday morning's open will try to fill.
Longer-term, MU is as much at the mercy of not just kinked supply chains, but capital flows as fiscal and monetary policy make headlines ahead of the start of third-quarter earnings season. Then things either get better or get really ugly.

I like Micron. I like Mehrotra. I like MU for an initiation of maybe one-eighth of intended position size below $70.
With the shares using that spot as support, I may not get the chance Wednesday. I'll wait. In the meantime, I may just go out two weeks and get paid about $1.05 for a few Oct. 15 $70 puts.
Get an email alert each time I write an article for Real Money. Click the "+Follow" next to my byline to this article.
TAGS: Earnings | Investing | Markets | Stocks | Trading | U.S. Equity

Taking a Leap of Faith to Buy Walmart Now

Sorry, Buy-and-Hold Types, but My Concern Isn't Beyond the Next Day or Two

That's how a short-term, long-focused trader operates in a bear market.

The next few weeks could be revealing for the steelmaker from a technical viewpoint.

The Market Is Anticipating Positive Comments From Jerome Powell

However, the wrong remark from the Fed chairman could derail any upward action.