There was a tiny shift on Tuesday. Perhaps I should use the word minute, but I'll use tiny for now.

First, anecdotally. I saw one guy on television say he no longer thinks this is a bear market rally and that we should buy dips. OK, that's a change. Then another guy on television who has been pretty bearish and has repeatedly said, "Sell the rally," decided that now it is OK to buy some S&P 500 calls. I almost did a double take.

No, he's not really bullish, but I guess he no longer wants to fight the rally.

The put/call ratio slipped a smidgen, as well, with a reading at .85 it was the lowest reading since July 7. Now .85 is not exactly low, but it shows just a little more acceptance of the rally.

I wish I could say the same for the Investors Intelligence bulls. I really thought they'd be over 50% by now, but shockingly they are up one, to 45%. That's like one person changed her mind. The bears remain the same at 27%.

About the only movement we see on the Investors Intelligence bulls is the 10 week moving average of bulls has moved enough for you to see it, as they are now 35% up from 30%. 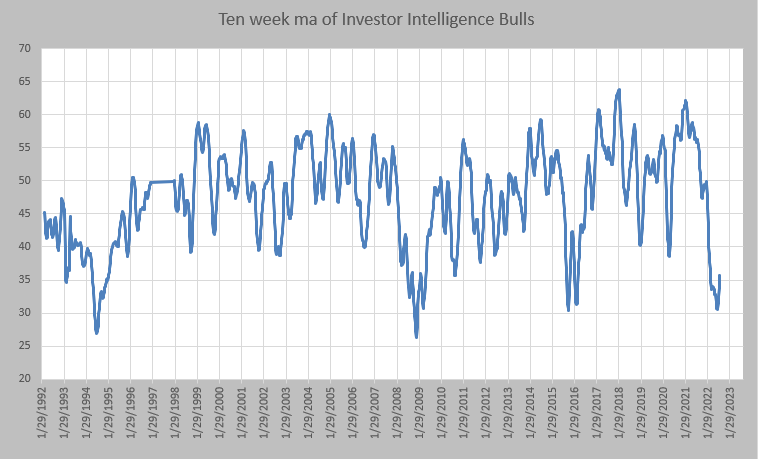 That was the big change in sentiment we saw on Tuesday. I grant you, with the major indexes sitting at their 200-day moving average lines and resistance, you can understand why folks are reluctant to get bullish here. Imagine if the market managed a pullback, though. Folks would feel better: At least they are not buying at the still declining 200 daily moving average. It would be like when you finally get all the air out of the zipper bag. Maybe the Federal Open Market Committee minutes, when released on Wednesday, will do that, but so far the pullbacks for the last week have been intraday.

In the meantime, breadth lagged a bit, but was still positive on the day, which means the indicators continue to go up. The McClellan Summation Index came into this week needing at net differential of negative 3,900 advancers minus decliners on the New York Stock Exchange to halt the rise and today it requires a net negative of 2,600.

As that number contracts, it gets to the point where it will be easier for one harsh down day to halt the rise. But for now it hasn't done that.

I want to end by noting that if we use the SPDR S&P Bank ETF (KBE)  and plot it relative to the S&P 500, would you be surprised to know that this relationship made its low in April?

The banks are at resistance now but the curious part to me is that when they go up relative to the S&P they often zoom upward (see September and late December/early January), but this time it has been rather sneaky in its outperformance. That has kept them under the radar.

Finally, Blake Morrow of the "Trader's Summit" recently interviewed me to discuss market sentiment, if you'd like to watch, click here.