Let's take a look at what happens when the mega-cap names sit it out and allow everything else to rally. Because that's exactly what transpired in the market on Wednesday.

We had decent breadth in the market, not just the advance/decline line but volume too. The NYSE saw 76% of the volume on the upside while Nasdaq saw 79% on the upside. Now Nasdaq was up a hundred points on the day but the S&P? Flat as can be. That just shows you how much those mega-cap stocks move the index around.

You can see it on the chart of the Overbought/Oversold Oscillator. It finally moved up. You don't even need to squint to see it. No, it hasn't crossed the zero-line but it is a lot closer than it was a few days ago. Based on the math, I expect we will see this over the zero line before the week is out.

There is something else related to breadth, the McClellan Summation Index is still heading down. But it now requires a net differential of positive 600 advancers minus decliners. Let's put that in perspective. The last time this reading was this "small" was early June just as it was rolling over. That means it hasn't even come close to stopping the decline for nearly six weeks. That's what spreading out the breadth of the market can do. 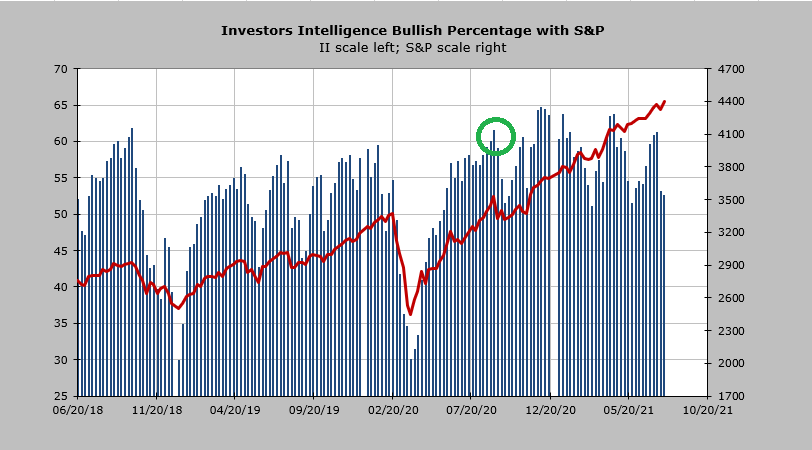 The ISE call/put ratio's 10-day moving average even turned up on Wednesday. Again, it is highly unusual for this to have been heading down for the last six or seven weeks, but that's what we had. Perhaps I should match this up with the Russell 2000 or even the equal-weighted S&P since you can see how bearish sentiment had gotten in all the non-mega-cap names.

Basically we've had two different markets for a while, but July was the first time that almost all the indicators took the path that related to the broader market and not the mega-cap tech stocks and that has been the biggest change in the last six weeks in the market.

In any event, the resistance at $222 on the Russell 2000 fund (IWM) stopped it again on Wednesday. The Oscillator says we should have a few more days with an open window for the non-mega-cap names to rally. I think it would be a big deal if IWM can get over $222 because I think it would change sentiment.

To go back to Tuesday's analogy of a sandcastle, Wednesday's action added sand to the bottom of the castle rather than take the sand away.