A rough 24 hours ago (Thursday morning), the U.S. Bureau of Labor Statistics released its Consumer Price Index data for May. Inflation for the month hit the tape a bit hot, but not all that much hotter than most economists had expected. Speaking only for myself, as I have been shopping on and off for a used car, the fact that used car prices soared 7.3% month over month as the ongoing shortage in automotive semiconductor chips has pushed new vehicles into a condition of increased scarcity was no surprise at all. (New vehicle prices were up 1.6% month over month.)

Remember how you were always told growing up that your vehicle was the one asset that you will purchase that only goes down in value? No longer true. Used-car prices are up 29.7% year over year. There really is some trade-in value parked in your driveway.

I know it feels like you are paying more for everything, and you are. I feel it, too. In fact, using the Fed's often-stated long-term goal of (once reaching, now averaging) 2% as a yardstick, on a year-over-year basis across all of the BLS report's sub-components, only food at home (+0.7%), medical care commodities (-1.9%), and medical services (+1.5%) fall short of that mark. Seven of these subcomponents are up double digits in percentage terms over the past year, with three (all in energy) actually hitting the tape at annual growth of 50% plus.

So, naturally (not really), on the day that such a report might be published, the U.S. Treasury yield curve would compress further. Not only did the U.S. 10-Year Note see that yield drop five basis points to 1.44% by day's end (I see it under 1.43% at zero-dark thirty on Friday morning.), but Treasury would also auction off $24 trillion in new 30-Year Bonds at a high yield of 2.172%, taken down again by above-normal Indirect (foreign) participation and above-normal bid to cover. I see 30-Year U.S. paper paying as little as 2.12% this morning, so demand has not ebbed one bit as you slept.

This unnatural reaction to higher prices reaches across into our equity markets. Of the 11 S&P Sector Select SPDR ETFs, the five cyclical sectors finished in the bottom five slots on our daily performance tables for a second consecutive day. Obviously, if bond traders push deeper into longer-term paper, then equity traders are going to lean on the Financials (XLF) . That makes perfect sense. However, one would think that under conditions of scarcity that create higher consumer prices, that Materials XLB stocks might find favor, not to mention pricing power. Not so. Instead, investors sought haven in deep value. Health Care (XLV) soared on strength in medical supplies and pharmaceuticals. Dividend payers were hunted, pushing Utilities (XLU) higher, and yes, there has been a return to growth, but not the kinds of stocks that do well in a growing economy.

We already told you that the five cyclical sectors underperformed. In addition, the small-caps and the transports also took one in the teeth. No, markets suddenly once again found favor in "growth" stocks, as software, semiconductors and telecom equipment providers supported the Technology (XLK) sector and Internet stocks propped up the Communication Services (XLC) group.

And never mind that noise you heard

It's just the beasts under your bed

In your closet, in your head

Know what these markets are pricing in? A word I heard often as a youngster, but not so much since, until recently. Stagflation.

Certainly not there yet. Stagflation is really an economics slang word used to describe the congruent conditions of rising inflation, high unemployment and slow or contracting economic growth that existed in 1970s America.

Consider the possibilities. U.S. GDP is rapidly rising and going beyond 2019 levels. That said, much of this "growth" has been purely based on expansive fiscal policy. Organic economic growth is knocking on the door, but still constrained by reduced supplies of available labor. In theory, a scarcity of labor supply at current price points should push wage growth higher. Personal income has also been supported through policy, and that has sustained consumer demand despite elevated unemployment. Apparently, the people who tend to work at these services jobs that often fill the lower portion of the income curve are in effect "on strike" as more than 9 million U.S. job openings remain unfilled according to the most recent data.

There have been two significant inputs that had resulted in the disinflationary period that really began late in the Reagan administration and ran right through the start of this pandemic. One, the forces of technological progress create far less opportunity for employment than did the Industrial Revolution or anything that followed up until the post-World War 2 era. Two. Globalization. There's a reason that those at the top of the income food chain are all for globalization of trade. Margin. That's simply because employment falls to the level of the lowest bidder. This goes not just for individuals manufacturing sneakers, but also for assembly line work, customer service, and even work in fields requiring higher education such as accounting or even education itself.

Does this push toward re-globalizing trade coming out of a pandemic and out of an administration that favored a protectionist agenda ultimately working to simultaneously suppress both wage growth and consumer level inflation? Is this why those at the Federal Reserve see inflation as transitory?

The fact is that while we focus on the timing of a withdrawal from extremely accommodative monetary policy, it is this eventual withdrawal from this almost purely debt-driven rebound in economic growth supported by fiscal policy (that was indeed necessary) that will ultimately cause the most pain. This will result in an almost-constant struggle at the political level as fiscal support has become the nation's (planet's) pain killer. Expansive fiscal support can only exist through aggressive monetary support. Unless the Treasury Department is forced to issue debt priced according to where there is free market demand. This could work for a while for as long as other economies do not follow suit. This will work as long as other economies remain in contraction, in deflation, and continue to see their central banks aggressively fund their own sovereign debt at artificial price points.

Listen. The facts are the facts. The people have chosen globalization. The result may ultimately be reduced employment on suppressed wage growth. Inflation may indeed be transitory, with the exception that wherever pricing power is discovered, that is where inflation becomes structural.

Will the economy contract if left to its own devices in coming years? I think this is beyond obvious. This is why both fiscal and monetary policies that remain aggressive will become at some point permanent. I am not arguing for or against, though I think you all know me to be a fiscal conservative and an Austrian-style economist at heart, so like everyone, I have in my way of thinking an unintentional bias.

That said, this is why, right now, when there is overt foreign demand for U.S. paper, the Fed, knowing that at some point fiat money creation (digital or not) becomes the only game in town and keeping federal borrowing costs artificially low becomes the very last strategy, that in the name of balance sheet preservation the Federal Open Market Committee (FOMC) should step aside and let someone else buy what they need. Let the long end go. Let it go all the way out to 3% or 3.5% as long as consumer inflation remains higher. This opportunity won't last forever. You are eventually going to have to conserve your ammo.

A bipartisan group of 10 U.S. senators led by "liberal" Republicans Mitt Romney of Utah and Rob Portman of Ohio as well as "conservative" Democrats Joe Manchin of West Virginia and Kyrsten Sinema of Arizona say that they have reached an agreement on an infrastructure building deal that would cost either $974 billion over five years or $1.2 trillion over eight years without raising taxes. Supposedly, the deal can fund itself through repurposing unused funds previously allocated to pandmeic relief programs.

Sounds awesome? Light on detail. Let's see if anyone among this group can sell such a deal to the polar bases of their own parties. Announcing such a deal might be as silly as announcing that the G-7 nations (which all currently run with corporate tax rates of greater than 15%) have agreed to a global minimum tax of 15%. That must have been a hard sell (LOL). Now try the 140-country Organization for Economic Cooperation and Development (OECD) and especially those seven countries at the bottom that have been stealing everyone's lunch. Survey says XXXXX. 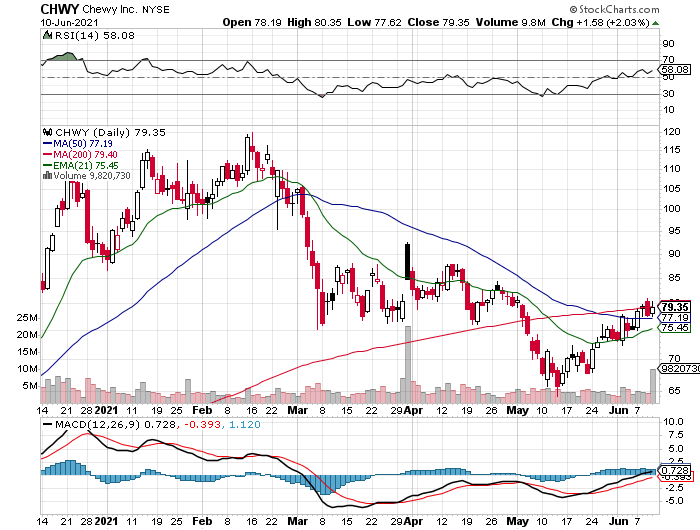 The stock traded considerably lower after reporting solid earnings on revenue that just met projections, but also saw exceptional growth in active customers. With a few hours left until the opening bell, the stock has rallied off those lows and I see it now trading with a $78 handle.

You see this stock take that 200-day line and I think you'll see professional money get on board. I have no position. Yet.

Get an email alert each time I write an article for Real Money. Click the "+Follow" next to my byline to this article.
TAGS: Economic Data | Economy | ETFs | Interest Rates | Investing | Stocks | Technical Analysis | Treasury Bonds | Pets | Real Money