Outside of retail, Medtronic (MDT)  will be reporting earnings this week, but Jim Cramer expects sales to be light as he laid out his game plan for this week during Friday's Mad Money program. Let's check out the charts and indicators of MDT.

In the daily bar chart of MDT, below, we can see a possible broadening pattern since late August -- prices make higher highs and lower lows to frustrate both longs and shorts. This looks like the bell of a trumpet or some other brass musical instrument going from narrow to wide. The price action is currently above the rising 50-day moving average line and above the declining 200-day moving average line.

The On-Balance-Volume (OBV) line shows a decline from early September telling us that sellers of MDT have been more aggressive despite that prices have traded up to a new high. The Moving Average Convergence Divergence (MACD) oscillator has been moving close to the zero line, which tells us that there is not much in the way of "trend strength" being displayed.

In the weekly bar chart of MDT, below, we see a less than robust picture. The shares are trading in a widening up and down pattern above the still declining 40-week moving average line.
The weekly OBV line made a low in March but it has moved up in fits and starts instead of a nice, strong rise. The trend-following MACD oscillator is above the zero line in bullish territory but has narrowed significantly.

In this daily Point and Figure chart of MDT, below, we can see a modest downside price target of $103. 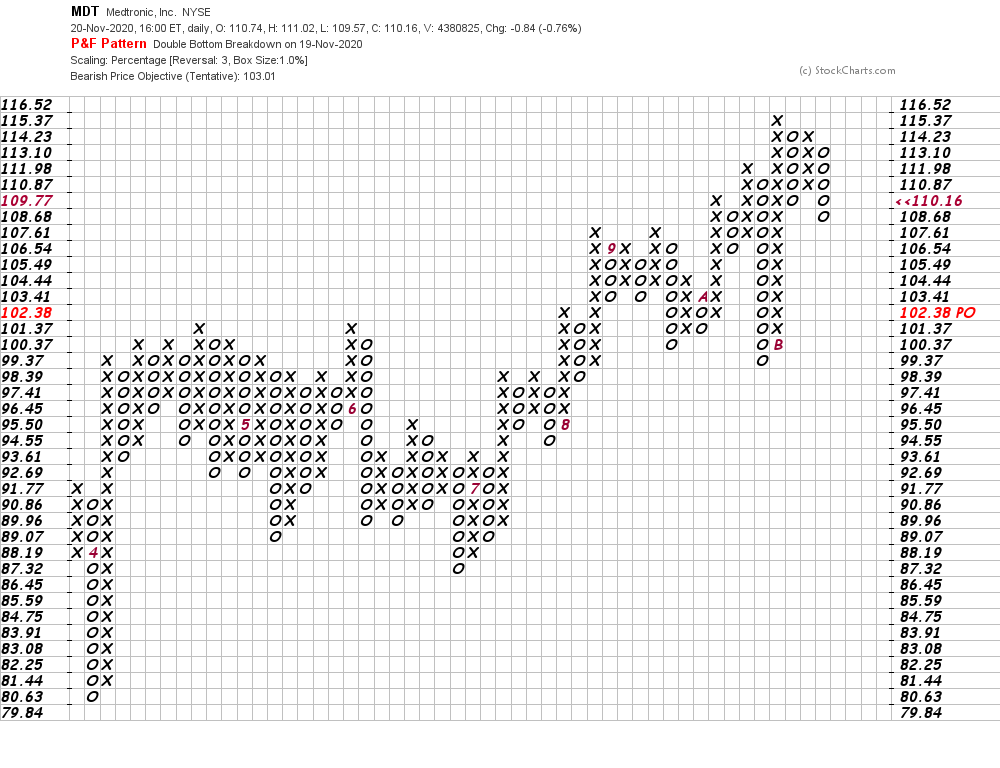 Bottom-line strategy: We talked about a broadening pattern on MDT but we need to give full disclosure -- the formation can be a reversal pattern and prices turn lower or it can be a continuation pattern and prices resume the rally. With the weakness in the daily OBV line I favor the downside for now.
Get an email alert each time I write an article for Real Money. Click the "+Follow" next to my byline to this article.
TAGS: Investing | Stocks | Technical Analysis | Health Care Equipment & Services | Mad Money | Earnings Preview

Jim Cramer: Tensions Between the U.S. and China Continue to Rise

I see no path to improve relations and many to make things even hotter.

Don't Be Fooled - This Is an Extremely Difficult Trading Environment

We are experiencing a dramatic rotational correction, but the business media is oblivious to what is happening.

I See Benefits With Ebix Ahead

Let look at the the 30-day moving average of the advance/decline line, sentiment and why a pullback could help shake the trees.