Personally, I have a couple of stocks in my portfolio reacting well early on Tuesday morning to quarterly earnings beats.

I could have written about Pfizer (PFE) , but I think I write a little too much about the vaccine stocks. Half of that is out of hope. For you. For the folks I love.

I could have written on Raytheon Technologies (RTX) . Who doesn't love a good aerospace/defense story? Then again, this is a group that I often default to.

One area I do not often write about is fast food. I love McDonald's (MCD) . The stock? Not sure. The food? Sure. That's why I worked in a McDonald's in Queens, N.Y. for three years during high school. The food was good, and they had teams in just about every sport. We would play against other McDonald's stores. Talk about fun. That was fun.

Earnings Tuesday morning? Not so fun.

McDonald's went to the tape Tuesday morning with its second-quarter financial performance. Then numbers are not good and the stock is acting like the numbers are not good. The numbers do seem to be getting better, however, which leaves the investor thinking about when and where to get involved.

It's not like McDonald's is going to start being inconvenient. It is businesses like McDonald's that do better when entire families are always on the go, with multiple people in the household earning a living and everyone pressed for time. That crux is the hinge that future performance for quick serve meals will turn on.

For the quarter, McDonald's posted adjusted earnings of $0.66 per share. This was actually about a dime below what Wall Street had in mind as there are clear misses in spots.

Revenue landed at $3.76 billion. Though this represent a 29.6% year-over-year decline, the number did beat expectations.

I will tell you why I see a glimmer of hope in McDonald's. It's in the same-store sales. Hey Sarge, comp store sales were -23.9%. I hear you, stay with me. The company breaks this stuff down for you.

Second-quarter comp sales were -8.7% in the U.S., -41.4% in International Operated Markets, and -24.2% for International Development Licensed Markets & Corporate. This less-than-optimal performance was almost entirely due to pandemic-related store closures, particularly in Europe and Latin America.

McDonald's business in the U.S. is much more drive thru "driven" than it is globally. That's important in times like these.

Broken out by month, U.S. comp sales posted year-over-year performance of -19.2% for April, -5.1% for May, and -2.3% for June. Keep in mind, this is with many dining rooms closed, and far fewer consumers grabbing an Egg McMuffin and a coffee on their way to work. (That's also an issue I need to see resolved for Starbucks SBUX by the way.)

What we do know is that the continuing impact of the public health crisis has forced McDonald's to pull back on advertising in order to preserve margins. Company operating margins were nearly halved to 9.1%, but this was indeed better than hoped for. The company has also increased reserves set aside for bad debt of $45 million for the quarter.

Ninety six percent of all global McDonald's locations were in operation as of the end of the quarter. That number was 99% in the U.S., though the company did announce that reopening dining rooms in the U..S would pause and then be delayed. 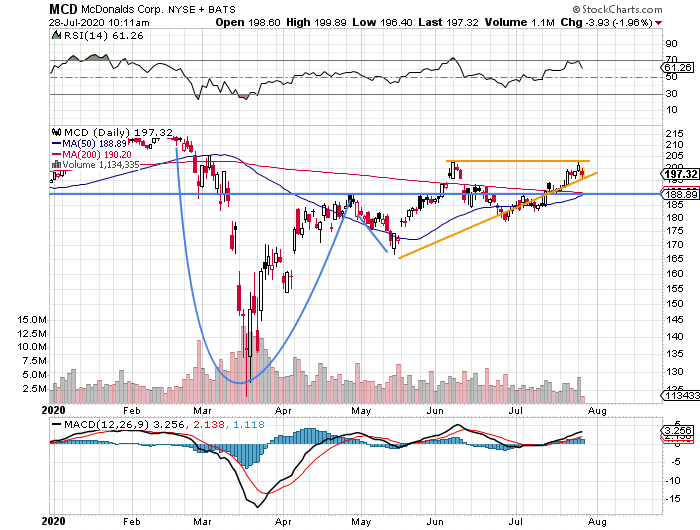 I do not think that McDonald's is a lost cause. I do think interested investors have a choice to make.

On the one hand, readers will see the cup with handle that created a pivot at $189, and did break out, but not to the degree that we usually look for. What has happened since then now looks like a double top supported by an ascending triangle. Confused? It's not just you. but I see this chart as supportive.

I think the convergence of the 50-day and 200-day simple moving averages at the former pivot point could provide just the impetus for a move higher off of the Tuesday discount.

My thought is to ease in. Maybe grab something small Tuesday, and then add. Add on a broad pullback across the marketplace caused by Washington, D.C., or on momentum as the double top is put to the test.

Given my level of uncertainty, I think the risk other than the initial equity outlay might be best approached through the options market. The interested party might purchase MCD Aug. 21 $205 calls at roughly $1.50 and pay for them through the sale of an equal number of MCD Aug. 21 $190 puts for around $2.15.

While this does increase potential equity risk at a discounted price it also serves the purpose of increasing net basis (actually reducing small) by setting up the momentum play.

Get an email alert each time I write an article for Real Money. Click the "+Follow" next to my byline to this article.
TAGS: Earnings | Investing | Markets | Put Call | Stocks | Technical Analysis | Trading | Coronavirus

Here Are the 3 Scenarios I See for Rates

Let's see what it would take for inflation pressure to keep building and for the Fed to start hiking -- and what both would mean for investors.

Including dividends, we see the potential for 11.4% annualized returns for this stock.