In his first Executive Decision segment of Tuesday's "Mad Money" program, Jim Cramer spoke with Chris Kempczinski, president and CEO of McDonald's Corp. (MCD) , the fast food giant that posted much stronger sales in May than April and now has reopened 95% of its restaurants.

Only 1,000 McDonald's restaurants in the U.S. currently have dine-in service available. Kempczinski said the dine-in experience won't be the same as pre-Covid-19.. That said, drive-thru has been McDonald's great asset. By limiting its menu, the company has been able to serve customers a full 23 seconds faster.

Turning to other topics, Kempczinski said McDonald's remains committed to bringing a loyalty program to the U.S. and expanding its trials of Beyond Meat (BYND) products.

Let's check out the charts and indicators to see if we serve you, too.

In this daily bar chart of MCD, below, we can see some interesting developments. Prices rolled over in February and declined to the middle of March, which is basically old news now. The recovery since the March low has been impressive, with prices rallying to the end of April and stopping at the underside of a potential resistance zone from $190 to $220. MCD retreated but resumed the rally from the middle of May. Prices pushed up into resistance and above the declining 200-day moving average line. The slope of the 50-day moving average line turned positive in late May and the On-Balance-Volume (OBV) line has followed the price action with an upward bias since March.

In this weekly bar chart of MCD, below, we can see that prices are just below the declining 40-week moving average line. Only a minor rally is needed to close above this indicator. The weekly OBV line has been steady the past three to four months. The MACD oscillator gave us a cover shorts buy signal last month.

In this daily Point and Figure chart of MCD, below, we can see that a trade at $203.41 or higher will be a breakout and refresh the uptrend. A price target of $268 is projected based on the accumulation the software sees on the chart. 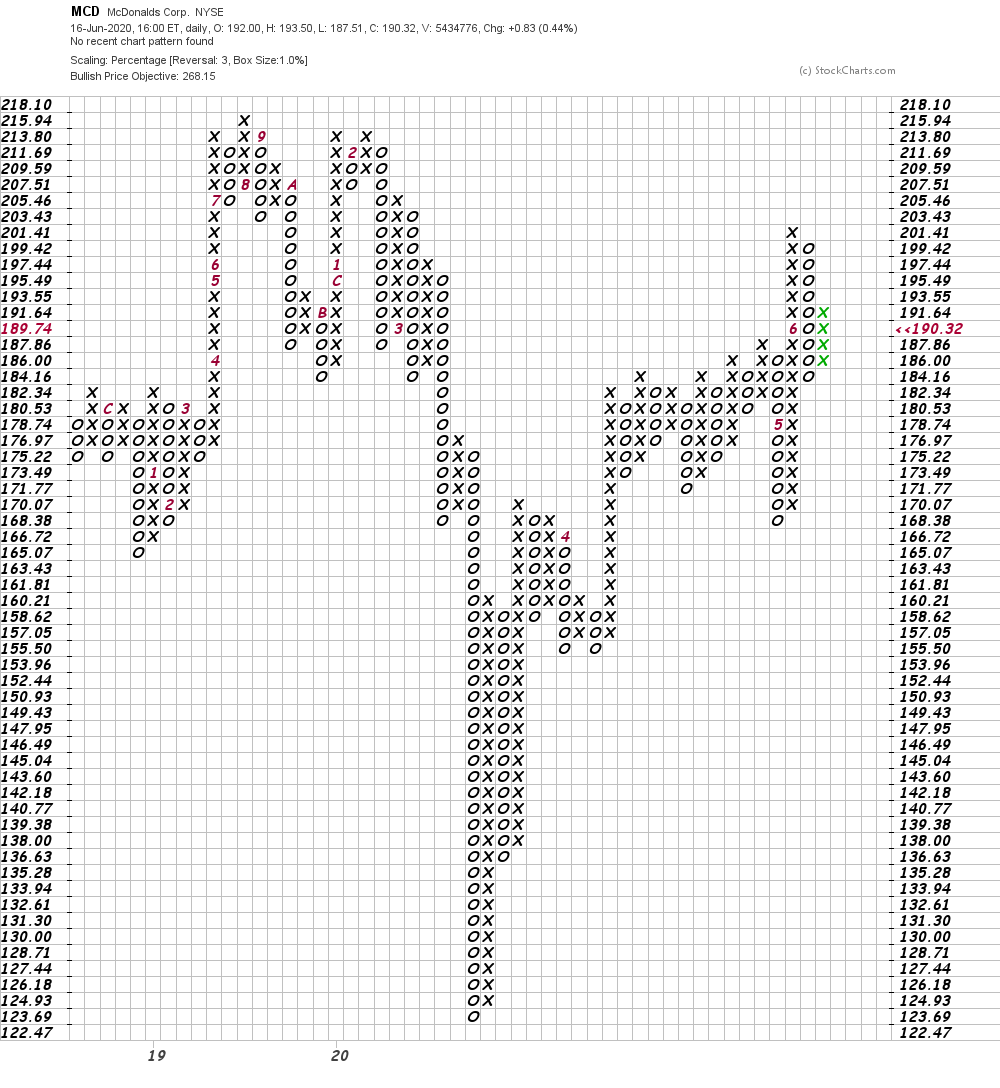 Bottom line strategy: MCD looks like it can trade higher despite warnings from my cardiologist. Traders can go long MCD at current levels, risking a close below $180. More could be bought above $203.41. Our price objectives are $220 and then $268.

Get an email alert each time I write an article for Real Money. Click the "+Follow" next to my byline to this article.
TAGS: Investing | Stocks | Technical Analysis | Consumer | Food & Drink | Restaurants | Mad Money | Executive Interview | Real Money | Coronavirus