Once again, several new all-time closing highs were registered on the major equity indices on Friday as the vast majority remain in near-term uptrends and lacking sell signals.

Meanwhile, the one-day McClellan OB/OS Oscillators are nearing overbought levels and forward 12-month earnings estimates for the S&P 500 continue to rise. As such, while we believe some very selective buying of individual names is still appropriate. 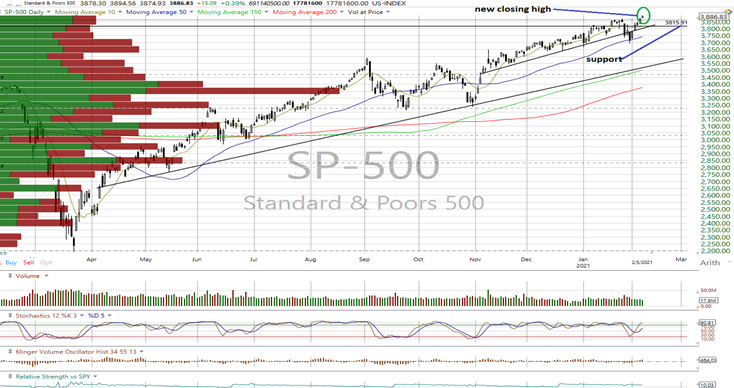 While the Dow Jones Transports was positive, it failed to violate resistance and remains neutral.

Cumulative breadth for the All Exchange NYSE and Nasdaq remains positive as well.

A number of overbought stochastic readings are now present but have yet to signal bearish crossovers.

No sell signals on the charts currently exist, in our opinion.

The McClellan one-day Overbought/Oversold Oscillators remain in neutral territory but are closing in on overbought levels (All Exchange: +48.96 NYSE: +49.77 Nasdaq: +48.68). While last week's oversold levels have been erased, the OB/OS have yet to suggest caution.

The Open Insider Buy/Sell Ratio saw some minor insider buying, moving the data point to 30.7 from 30.1 and remains neutral.

However, last week's Investors Intelligence Bear/Bull Ratio (contrary indicator) remains on a bearish signal at 16.5/61.2, suggesting an excess of optimism still exists on their part. New Bear/Bull Ratios will be released Tuesday.

Valuation continues to appear extended. The forward 12-month consensus earnings estimate for the S&P 500 from Bloomberg rose again, this time to $172.08 per share, leaving the S&P's forward P/E multiple at 22.6x, while the "rule of 20" finds fair value at 18.8x, widening the valuation gap. Yet, the valuation spread has been consistently wide over the past several months while the forward estimates have continued to rise consistently.

We remain "neutral" in our macro near-term outlook for equities. However, we continue to believe some very selective buying may be warranted where the charts and fundamentals suggest good risk/reward scenarios exist.